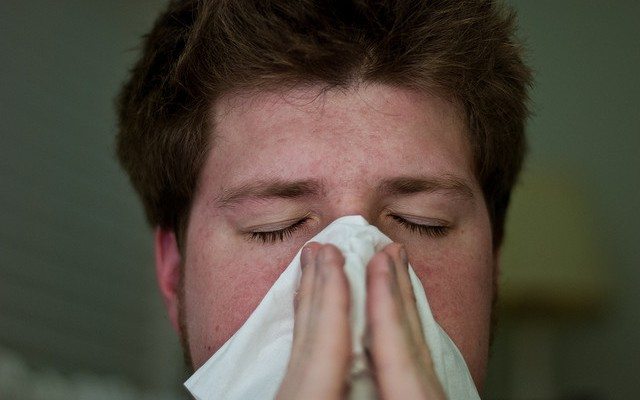 Are We in for a Bad Flu Season?

Start saving up your sick days. The Centers for Disease Control and Prevention (CDC) says that the upcoming flu season could be severe. The agency expects influenza A (H3N2) to dominate this year. H3N2 causes more hospitalizations and deaths than other flu types and has mutated since this year’s vaccine was created. Is it time for a quarantine? Probably not. But even if you’re vaccinated, you could be purchasing more tissues than usual from now until March as flu season peaks. I’ll break down what you need to know below.

How bad will it be?

Here’s some perspective: last year’s vaccine was only about 50-55 percent effective and experts estimate we won’t even reach those levels this year.

So, what is the flu anyway?

The flu we’re talking about should not be confused with the stomach flu, which is really just slang for gastroenteritis. It’s also not a blanket term for any ailment. You only have the flu if you’ve been infected with the flu virus.

A true flu is a viral infection that preys on your nose, throat, and lungs. The flu sees these mucous membranes as ideal ports of entry. Even innocently rubbing your eyes invites the flu into your body. Once the flu gets in, it causes an infection that leaves your respiratory system hampered and makes you feel generally miserable–sneezing, coughing, weak, and sluggish.

This video from Health 360 explains the flu virus and how it invades your body.

So hemagglutinin (H) assists in infecting the host cell and neuraminidase (N) helps the replicated virus proliferate. They work together to infiltrate as many immune systems as possible. Different subtypes of these viral proteins–Hs and Ns–are behind all of the confusing names for different flu viruses like H3N2, H1N1, etc. Let’s end that confusion once and for all.

Three types of flu affect humans: A, B, and C.

The ABC’s are the least of your worries in understanding flu names. Naming the flu gets complicated when we look at all of the subtypes of the viral proteins (spikes), hemagglutinin (H), and neuraminidase (N) that we just learned about above.

There are 16 possible subtypes of H and nine subtypes of N that can recombine to form 144 different subtypes of the flu virus that are named based on which H and N subtypes they contain. The influenza A virus dominating this year is named H3N2 because it has the viral protein subtypes H3 and N2 decorating its surface.

For example, this year’s dominant strain of influenza A (H3N2) drifted antigenically from the strain used to create the vaccine. So even if you’re vaccinated, your immune system might respond differently if you’re exposed to the newly drifted virus.

The Drifts and Shifts of the Flu

The flu virus has a sneaky habit of changing and tricking the immune system into letting it pass. The change happens through antigenic drift or antigenic shift. The preceding “antigenic” refers to antigens, which trigger your immune response. So the drifts and shifts produce a virus strain with altered antigens that your immune system will respond to differently. The antigens in this case are the viral proteins H and N. Your immune system responds to the shape of H and N subtypes you were vaccinated with. If those shapes change enough, you could have a problem.

Antigenic drift happens when small changes naturally accumulate over time as a virus copies itself. At first, the drifted virus will be antigenically similar enough that a vaccinated immune system can recognize it. But small changes can compound over time so the shapes of the proteins drift enough that even a vaccinated immune system can’t recognize the drifted virus.

Think of a close friend getting a radically different haircut. She’s the same person, but at first glance you might not realize it because she looks completely different. If a virus drifts enough to create an antigenically different strain, the immune system might not be able to recognize and bind to the new shape of the viral proteins.

The flu drifts adeptly so we need to create a new vaccine every year. Drift is also why you’ll probably get the flu more than once in your life.

An antigenic shift causes fast changes that make completely new H and N viral proteins. The virus is so altered that humans have no immunity to it, even if they were vaccinated. This happens when viruses shift from animal populations to infect humans.

Antigenic shift occurs rarely, but it can be devastating. Pandemics and epidemics like the 2009 H1N1 flu pandemic often happen when a flu virus shifts suddenly. Flu viruses usually shift to humans from domestic pigs and poultry. Don’t worry, this year’s dominant influenza A (H3N2) has only drifted not shifted.

Since it takes so long to develop the vaccine, experts have to pick the virus strain they’ll use months in advance. There’s always a good chance the virus will drift in the interim as it has this year.

Private companies make flu vaccines but are subject to FDA safety and efficacy requirements. The FDA has approved three flu vaccines: egg-based, cell-based, and recombinant flu vaccines. The processes vary, but here are the basic steps:

Historyofvaccines.org has a great animated walk-through of the process. Check it out here.

When you get your vaccine–the flu shot–it kind of tricks your body. Immunity builds when you’re exposed to a pathogen, such as a virus. In most cases you have to get sick to build this immunity. When your immune system fights off a virus once, it keeps a memory of the virus in case it returns.

A vaccination gives you the benefits of exposure and immunity building without making you suffer through the actual illness by exposing you to a harmless version of a pathogen. It won’t make you sick, but your immune system responds like a feisty dog that barks at anyone who knocks on your door. The overprotectiveness eventually pays off. If a harmful version of the virus tries to take you down, your immune system will have an immune memory to use in the fight.

That sounds OK, why doesn’t everyone do it?

There’s just something inherently scary and untrustworthy about getting injections. People come up with many fears and excuses for not getting vaccinated. Take a look at the video below.

And the list continues with NPR’s 32 Myths About The Flu Vaccine You Don’t Need To Fear. The good news? Most fears and excuses for not getting vaccinated are unfounded. The bad news? People don’t care if their fears are unsubstantiated.

Researchers have found that foiling flu vaccine myths doesn’t increase a skeptic’s intent to get a vaccine. It actually reduces it. The study suggests that explaining the facts about vaccines might remind people of why they were fearful of getting them in the first place or even give them new information to worry about. This only solidifies their anti-vaccination stance.

So what are we doing about this flu mess?

The CDC maintains that a flu shot is still the best way to protect yourself, but it also urges doctors to prescribe antivirals to people coming in with flu-like symptoms or those at high risk such as children, pregnant women, and adults 65 and older. Antivirals work best within 48 hours of flu symptom appearance, so most doctors will not wait for a positive test to prescribe them.

Is antiviral resistance a problem?

With doctors prescribing medication without lab test confirmation of the ailment, you might be wondering if antiviral resistance is a concern. Yes, it’s actually an inherent problem since the rapid replication process of viruses leads to mutations that can evade antivirals as well as immune systems and vaccines. Some strains of influenza have already become resistant to drugs that have been on the market for a while like oseltamivir, amantadine,  and rimantadine.

What are the benefits?

Results from past flu seasons and the 2009 H1N1 flu pandemic show that these drugs can reduce potentially devastating effects of influenza. Clinical trials and observation show reductions in symptoms, complications, and deaths from influenza with antiviral use.

All Things Considered, It’s Not So Bad

With its fast and unpredictable changes and complicated subtypes, the flu presents a formidable enemy for modern medicine. Flu shots and antivirals aren’t the perfect weapons, but they’re more effective than entering the battle unarmed. So how bad is this flu season going to be? Probably worse than last year’s, but a pandemic doesn’t seem likely.

CDC: Health Advisory Regarding the Potential for Circulation of Drifted Influenza A (H3N2) Viruses

CDC: How the Flu Virus Can Change: “Drift” and “Shift”

CDC: How Influenza (Flu) Vaccines Are Made

Ashley Bell
Ashley Bell communicates about health and wellness every day as a non-profit Program Manager. She has a Bachelor’s degree in Business and Economics from the College of William and Mary, and loves to investigate what changes in healthy policy and research might mean for the future. Contact Ashley at staff@LawStreetMedia.com.
Share:
Related ItemsCDCCenters for Disease ControlDriftFluFlu SeasonInfluenzaShiftVaccine