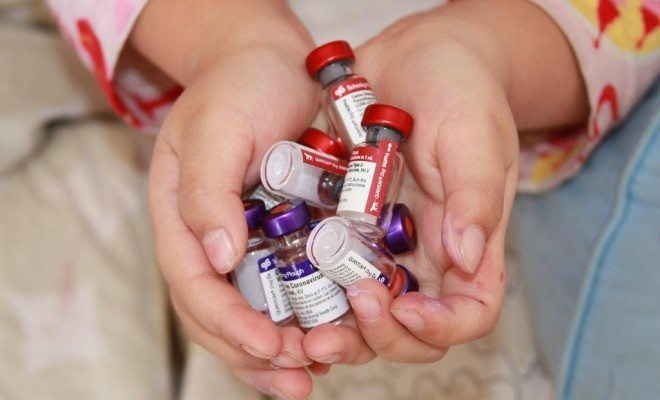 In recent years, an increasing number of parents decided not to vaccinate their children for a number of diseases. Vaccinations are largely heralded as one of the most effective instruments for public health. Measles, declared eliminated in the United States in 2000, is now back in full force primarily due to lack of vaccination. Here’s what you need to know about the controversy surrounding vaccines, preventable diseases, and what more can be done.

Why are we worried about measles?

It’s true, those pesky measles are back. That contagious respiratory disease characterized by a fever, runny nose, cough, and itchy rash is once more making its way through towns in the United States. Most cases result from foreigners traveling to the United States infecting those who are not vaccinated. In the decade before the measles vaccine was introduced, the Centers for Disease Control and Prevention (CDC) reported an estimated 3 to 4 million people contracted measles each year. The disease caused many cases of chronic disability, hospitalization, and even death. Before the vaccine, the virus affected more than 95 percent of children. Measles kill approximately one in every 1000 cases. About 30 percent of cases develop further complications, including pneumonia, ear infections, or diarrhea. The vaccine for measles, commonly known as the vaccine for Measles Mumps and Rubella (MMR) was introduced in 1967. Following a large measles outbreak from 1989 to 1991, Congress instituted the Vaccines for Children Program to increase vaccination rates. Following, cases of measles rapidly fell. The recent return of measles has largely been blamed on the anti-vaccination movement. Watch below for an overview of the benefits of vaccines:

Why don’t parents want to vaccinate their kids?

Parents are hesitant to trust the government or pharmaceutical companies and have a number of concerns in allowing their children to be vaccinated. The anti-vaccination push began following a 1998 study by researcher Andrew Wakefield in the British journal, The Lancet. The study declared a link between the MMR vaccine and autism. However, the article has since been widely discredited in the scientific community due to conflicts of interest and manipulated evidence. The paper was retracted in 2010 and Wakefield lost his medical license. Despite the following events, many parents are still concerned that the MMR vaccine will cause autism. Watch below for some debate of the study:

Beyond this, the anti-vaccine movement has continued to gain traction for a variety of reasons:

Actress, model, and “The View” host Jenny McCarthy has been a vocal opponent of vaccination. McCarthy claims the vaccines have toxins that are generally unsafe, especially as the amount of required vaccines has increased. Scientists point out that vaccines contain a much less amount of toxins than other foods. Other opponents of vaccination include actor Aidan Quinn, who connects his daughter’s autism with the MMR vaccine, and reality star Kristin Cavallari, who opposes the vaccination of her children. Listen to Jenny McCarthy discuss autism and vaccination:

Some parents are worried about vaccine load, where the child’s immune system may not be able to handle multiple shots at one time. Children now receive up to 28 shots by age 2. Several studies show receiving multiple vaccines on the same day is not associated with increased chances of autism. Further, while the number of vaccines given to children has increased in recent years, the amount of main ingredients in vaccines has decreased. Worries of vaccine load mean many children are not vaccinated in a timely manner. The claim is also made that vaccines cause a permanently depressed immune system. Instead of vaccination, children should be allowed to build up natural immunity over time.

Concerned parents cite the mercury-based preservative thimerosal in vaccinations as a cause of potential brain damage. Government officials have deemed thimerosal safe and found no evidence of harm. However, by taking the voluntary precaution to phase the compound out of vaccinations in 1999, the CDC instilled a greater fear of vaccinations.

Others object to vaccination solely on a religious basis. They claim vaccination interferes with natural law and God’s plan. Others believe the body is sacred and should not receive certain chemicals, blood, and tissue from animals.

Don’t parents have to vaccinate their kids?

All states allow vaccination exemptions for medical reasons. Nineteen states allow philosophical exemptions for vaccinations. In states with philosophical exemptions like Idaho, Michigan, and Vermont, more than 4.5 percent of kindergarteners last year were unvaccinated for non-medical reasons. These rates are four times the national average and are potential hotspots for outbreaks. Mississippi and West Virginia are the only states to not allow religious exemptions.  So far,  those states have not seen any disease outbreaks. A federal judge recently upheld a New York City policy that unvaccinated students are not allowed to attend school when another student has a vaccine-preventable illness. Ultimately the right to forgo vaccination for religious reasons doesn’t trump the fear that unvaccinated students may contract and spread the disease.

Until 2011, parents in Washington could opt out of vaccinating children simply by signing a form. This system meant up to a quarter of kids in some counties opted out of vaccinations. States that allow non-medical exemptions have seen more parents forgo their children’s vaccines. From 2000 to 2010, non-medical exemptions in California tripled. Watch for a description of a recent measles outbreak:

Has lack of vaccination led to more cases of disease?

The overwhelming majority of current measles infections occur in unvaccinated people. From the beginning of 2014 to June 20, 2014, the CDC declared 514 cases of measles and approximately 16 outbreaks, the most since 1996. Half of these casesare adults age 20 and over. Following a widespread measles outbreak in San Diego in 2008, roughly one in five children were not vaccinated against the disease. Even last year in California, USA Today reported 14,921 children were not vaccinated for philosophical reasons. In Colorado four percent of kindergarteners did not have shots for non-medical reasons. Watch below for information on the recent measles outbreak:

Another vaccine-preventable disease, pertussis, or whooping cough, increased considerably in recent years. In 2012, a fifty-year high of almost 50,000 cases of whooping cough were reported, a stark contrast from the 1980s and early 1990s when rates hovered around 5,000. Through June 16, 2014, almost 10,000 cases of whooping cough were reported, which is a 24 percent increase when compared with the same period in 2013. This is attributed to the anti-vaccination movement as well as weakened antibodies which wane as a person ages.

Should I be worried?

If you are vaccinated and your shots are up to date, probably not. The most vulnerable are infants who are too young to be vaccinated and the elderly who may not have proper boosters. The effects of vaccination deteriorate over time, so adults who have not gotten booster shots can still contract the disease from an unvaccinated person. Unvaccinated people may not even know if they are carrying a disease like measles, but they can still contagious before any symptoms arrive. A recent case study of an individual dubbed “Measles Mary” has even shown it is possible for a vaccinated person to contract measles and then unwittingly pass the disease on to others.

A recent study by the CDC showed routine childhood vaccinations given between 1994 and 2013 will save 732,000 lives while preventing 322 million cases of illness and 21 million hospitalizations over the course of the children’s lifetimes. According to the Washington Post, every $1 spent on vaccines provides $10 benefit to society.

Medical experts agree proper vaccination is extremely important. Having more people vaccinated makes it less likely that anyone in the community will get a disease, a phenomenon known as “herd immunity.” Aiming for vaccination rates higher than 90 percent can help protect the most vulnerable, especially infants who are too young to be vaccinated. Most officials think the best strategy to increase vaccination is a tireless public education campaign to dispel rumors regarding the danger of vaccines. Watch a video below aimed at educating parents:

CDC: Benefits from Immunization During the VCP Era

Washington Post: How the Anti-Vaccine Movement is Endangering Lives

Week: The Worrying Rise of the Anti-Vaccination Movement