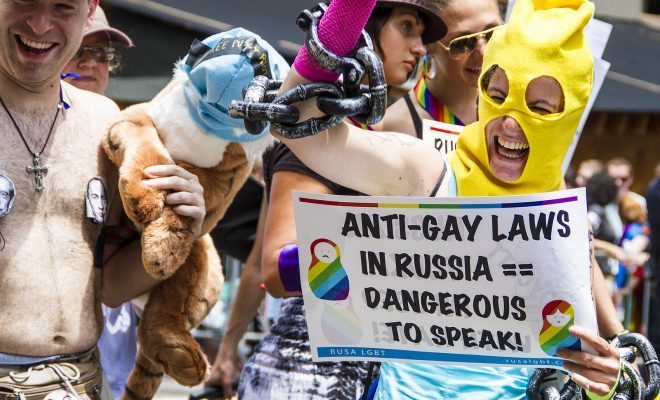 Russia’s treatment of its gay citizens has long been very unforgiving. The country often systematically discriminates against LGBT citizens, has rashes of hate crimes, and has been decried by much of the international community for the human rights abuses against the LGBT community. Read on to learn about the recent history of LGBT abuse in Russia, current issues, and what the future may hold.

Russia is extremely socially conservative when it comes to LGBT rights. The influence of the Eastern Orthodox Church plays a large part in this, as it consistently stands very strongly against homosexuality.

On June 30, 2013, the upper house of Russia’s parliament passed a bill banning propaganda involving non-traditional sexual activity from being given to minors. The law defines propaganda as:

The law sets the penalty for individuals distributing propaganda at 4,000-5,000 rubles ($120-$150). The penalty for groups, such as NGOs or corporations, is up to 1 million rubles ($30,000). There are also harsh penalties for non-Russian citizens who break the laws. Foreigners can be sentenced to 15 days in prison, and possibly even deported from the country.

Around the same time, a much broader blasphemy law came into effect in Russia, which allows for prison sentences of up to three years for those who attend protests that infringe on Russian citizens’ religious feelings.

HBO just released a documentary entitled “Hunted: The War Against Gays in Russia.” The striking documentary chronicles attacks against LGBT individuals by vigilante groups in Russia, and the consistent indifference of the authorities to the issue. The film depicts the nightmare that LGBT people in Russia face on a daily basis.

Russia’s approach toward gay rights became a strong topic of contention during last year’s Olympic Games. Yelena Kostychenko, an independent newspaper journalist, said that “this law has brought fascism to my country.” International human rights groups have indicted this law as “the worst human rights climate in the post-Soviet era.” The International Olympic Committee (IOC) heard from various sponsors expressing their concern over the new law. On SumOfUs.org there is a petition signed by 35,000 people asking for Coco-Cola to speak publicly against this law. Forbes even reported that “the safety and dignity of Russians, athletes and fans is in doubt as long as Russia’s anti-gay laws are intact.” In addition to the many activist groups, athletes, and general public against Russia’s anti-gay propaganda law, the “Open Games” has been created. Viktor Romanov’s gay-friendly Olympics in Moscow happened three days after the Sochi Winter Olympics for athletes of any orientation. Romanov has said he isn’t afraid and has taken this law and turned it into an outlet for acceptance.

Others believe that while this law may affect people’s perception of Russia, it should not affect the way athletes viewed the Olympics as an objective, unbiased event that draws on nothing except the skills of the various competitors. Alex Ovechkin stated, “I’m a hockey player and I’m not [into] politics.” Johnny Weir, who is an openly gay retired athlete was an analyst with NBC in Russia. He stated that he will not risk jail time by making a political statement. He, like Ovechkin, mentioned that he was not a politician and would respect Russia’s law. Russian athlete Ilya Kovalchuk agrees with the anti-gay propaganda law and said, “I’m Russian and we all have to respect that. It’s personal and, like I said, it’s a free world, but that’s our line. That’s our country, so everybody has to respect that.”

These athletes may or may not agree with the law, however they understood the importance of respecting Russian ideals. More than 70 human rights organizations showed support over Russia’s anti-gay propaganda law after the first week of publication, and hailed the country as guarding “genuine and universally recognized human rights” issues. Jack Hanick of Fox News supported Russia’s traditional values and banning of anything that diverts from this. The new propaganda law might have left a bad taste in certain people’s mouths, however it did not affect the competition or the actual games.

Despite the fact that Russia’s anti-gay laws didn’t end up having much effect on the 2014 Olympic Games, the conversation is far from over. Russia continues to sit by while the international community observes its many human rights violations happening on its soil. The way in which Russia moves forward on this issue could have a huge impact on its reputation within the international community.

The New York Times: ‘Open Games’ in Moscow to Test an Antigay Law