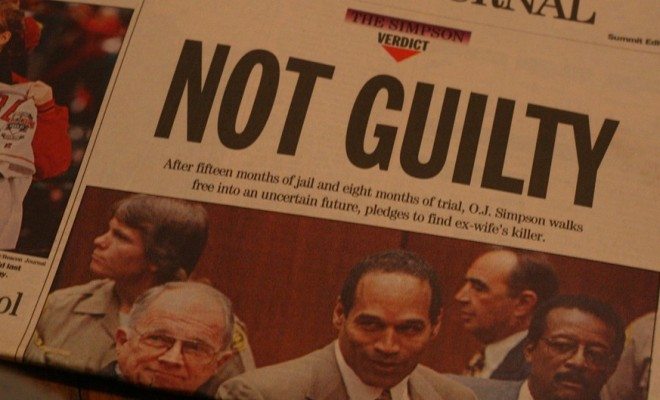 It was the event that no one could stop talking about between 1994 and 1995. Everyone around the country was glued to the television to see what would happen to O.J. Simpson, once-beloved celebrity and accused murderer. Before O.J., there were televised trials of Ted Bundy, the Menendez Brothers, and Jeffrey Dahmer, among others. And since O.J., we’ve televised quite a few high profile trials. For celebrity buffs, Lindsey Lohan’s streamed on TMZ. There was, of course, the horrifying Casey Anthony case that captured national attention during the summer of 2011. Most recently, spectators were able to watch the Jodi Arias and George Zimmerman proceedings from their homes.

In fact, media streams of famous court cases have become rather ubiquitous in American culture. But should they be? We’ve turned everything from Congressional debate to young children in beauty pageants into must-see TV. Should trials be the same way? Read on to learn about the debate over televising trials, and the arguments for and against allowing cameras into courtrooms.

What are the rules about filming trials?

In the United States, the general rule is that photography and broadcasting of criminal trials in federal courts is banned but can be overridden by a law or another court rule. Many judges decided to ban broadcasting and photography from courtrooms after the O.J. Simpson trial. The U.S. Supreme Court has held that televising trials is not a violation of constitutional due process.  In certain cases, jury deliberations are publicly broadcasted. The broadcasting of criminal trials is very controversial and even the Senate Judiciary Committee and the U.S. Supreme Court have differing views about its propriety.

What’s the argument for putting criminal trials on TV?

Furthermore, a Colorado Supreme Court Justice argued that religious worship and ceremonies are televised and there is no public consensus that religious practices are denigrated when broadcast so there is no reason to assume that the legal process will be.

Even if being televised can make witnesses nervous, that is not necessarily a bad thing. Nervousness makes potential discrepancies and inaccuracies easier to notice and reluctant witnesses can be persuaded by the legal action that brings them to court e.g. police escort and subpoenas. Finally, though there is an ongoing study, there is no evidence that televising criminal cases has more impact on a criminal trial than the presence of an audience, which is generally permitted.

What’s the argument against televising trials?

Opponents of televising criminal trials argue that it creates numerous procedural difficulties that waste the court’s time and may prejudice the defendant. These include the necessity of judges monitoring the manner of the broadcasting. It is also difficult to sequester juries to prevent them from watching the trial on TV. Broadcasting trials makes it more difficult to impanel an impartial jury if a second trial is necessary. There is an increased need for marshals and being broadcast has a significant mental effect on witnesses, jurors, and court officers.

If criminal trials are televised then they become spectacles for the public and the solemnity and dignity of the judiciary will be compromised for the sake of entertainment. For example, after an expert witness testified in Jodi Arias’ case, she was attacked online and the media coverage could have possibly swayed what weight was given to her testimony.

Televising the conduct of judges and lawyers creates a virtually universal conflict of interest within the court system. The Court’s officers will be tempted to consider their television appearance in addition to the needs of their client. It is even possible that a lawyer could weigh his interest in having an attractive TV appearance higher than his duty to his client. Lawyers may try risky strategies in order to impress a potential television market, and judges may behave in ways that are most conducive to their political aspirations even if they are not warranted by the law. If a highly controversial criminal trial (e.g. the George Zimmerman trial) is televised and the verdict is not popular with a significant portion of the public, then an officer of the court or juror could be a target of disgruntled viewers.

We now have the ability to broadcast basically whatever we want. Trials are public for the most part–family, friends, and others who know or do not know the parties are often able to go and observe the proceedings. Televising trials allows everyone to have that access to the justice system, and promotes transparency and understanding. That being said, broadcasting trials and the resulting media coverage and analysis could have potential to affect the trial itself. While justice may very well be blind–should our knowledge of court cases be? It’s not an easy question or an easy answer, but one that will have to be answered very soon.

U.S. Constitution: Due Process Clause of the 14th Amendment

RTDNA: Cameras in the Court: A State-by-State Guide

Guardian: Televising the Courts: the Time Has Come

Townhall: Say No to Televised Trial

Debate: Should Criminal Trials be Televised?