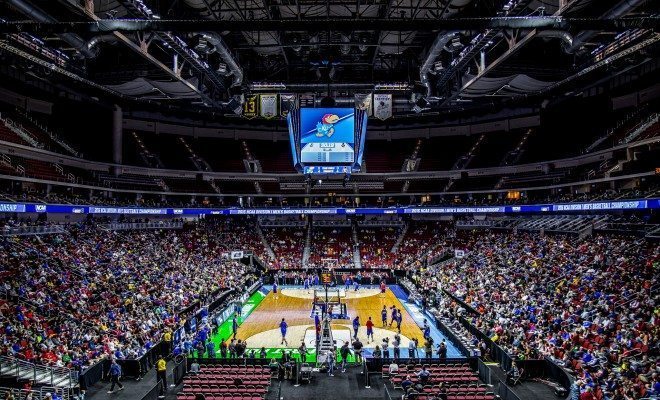 The NCAA Tournament: The Method behind the Madness

On Sunday, March 13 the 68 teams vying for the Men’s NCAA basketball championship were selected, and actual play started just a few days later. While the tournament will capture the spotlight and attention of millions for nearly a month, there are a number of other related events that often go unnoticed. This includes everything from massive amounts of money changing hands to the number of work hours wasted checking phones, computers, or simply watching the tournament. Keep reading to find out the impact of the NCAA basketball tournament beyond filling out brackets and the action on the court.

Although the current men’s tournament is portrayed as some early spring colossus, this was not always the case. The men’s tournament began in 1939–that year Oregon defeated Ohio State in the final game. Even after its start, the original tournament would be almost unrecognizable by today’s standards, with only eight teams competing for the first 12 years. At that time the tournament was so insignificant, in fact, another tournament, the National Invitation Tournament (NIT), decided the national champion.

The tournament slowly expanded to 16 teams in 1951 then to 22 teams in 1953. The number stayed relatively static for the next twenty years. In 1975, the field grew again to 32, incorporating teams beyond the conference champions. The tournament stretched to 40 teams in 1979 and 48 the subsequent year. In 1983, the number of teams increased to 53, eventually reaching the familiar number of 64 in 1985.

The field grew again in 2001, finally reaching 68 teams in 2010. The competition now includes four play-in games before the traditional tournament starts. Along with the tournament’s consistent growth in size came new methods of selecting teams and seeding them after selection.

The men’s and women’s basketball tournaments are run by an organization known as the NCAA, or National Collegiate Athletic Association, which administers and oversees college-level athletics in the United States. It began in 1906, adopting its current name in 1910, as an organization to codify college football rules and those of other sports. While it is hard to fathom today, the organization lacked any real clout until 1942, and particularly gained prestige in 1952, when it began regulating live football coverage. In 1973, it separated into three divisions: Division I, Division II, and Division III. The larger schools with larger budgets play in Divisions I and II and smaller schools play in Division III.

Today the NCAA oversees collegiate athletics regionally and nationally, including 80 national championships which spread across 20 sports in the three divisions. Along with determining rules and performing administrative tasks, the NCAA’s other function–one that draws a lot of criticism–is determining eligibility.

As both the bracket and the NCAA have grown over the years, so too has profit from the basketball tournament. While this is often seen as a time of entertainment and friendly bets at its core, there is a massive amount of money changing hands. In 2014 for example, advertisers alone spent $1.13 billion to show ads on networks during the NCAA tournament. Furthermore, over a 10-year period ending in 2014, revenues exceeded $7.5 billion. Much of this money then goes to the NCAA through licensing deals. Of the $1.13 billion in 2014, approximately $800 million went to the NCAA for licensing fees. The video below looks at the business side of the tournament:

The NCAA sends most of this money to the participating schools. How this process works is for every non-championship game played in the tournament a team earns its conference a unit of money. The money is then paid out to the conferences over a six-year period based on the number of games its teams played. The conferences typically split the money among member teams. Since the money is split among every team in a conference, some schools earn less than if they were able to keep their respective winnings. However, this provides a needed source of income for teams not consistently in contention. Even with this bonus–along with streams of income like ticket sales, boosters, and merchandise–nearly one-third of teams lose money or just break even on their basketball programs after expenses.

Unsurprisingly, for a tournament that generates so much money and interest, gambling plays a major role. This gambling is generally divided into two parts. The form that is most often associated with the tournament is done through bracket pools, which are filled out across the country in businesses, schools, and among friends. While this good-natured form generally includes only small wagers, it is probably illegal for most. But when it comes to enforcement, the authorities typically don’t intervene.

The other form is the high stakes level of gambling. Betting on the NCAA men’s basketball tournament even surpasses the amount bet on the Super Bowl, though, the tournament spans several games. According to estimates from the American Gaming Association (AGA), $9.2 is expected to be bet on this year’s tournament and Americans will fill out approximately 70 million brackets. But according to the AGA, much of that is done illegally. In a press release the association notes:

Of the $9.2 billion that will be wagered this year, only about $262 million will be bet legally at Nevada sports books. The total illegal sports betting market in the United States grew to $148.8 billion in 2015.

The following video looks at the gambling associated with the tournament:

One of the largest issues surrounding March Madness, beyond gambling and its legality, is the role of the athletes who remain unpaid as the NCAA, basketball conferences, schools, and gamblers profit. Collegiate athletes are considered amateurs by the NCAA, which prevents them from earning money for their work. Instead, they are paid in scholarships. While other students, particularly those with student debt, may see athletes’ free education like a decent deal, its value is often far below market value for what the athletes generate.

Athletes are also unable to augment their wages with endorsements or money from agents or boosters. In fact, athletes are barred from having any contact with agents until they give up their amateur status. But universities are free to accept money from and even depend upon boosters. Athletes in sports like basketball and football are also barred from jumping straight to American professional leagues as well, leaving them few options other than going to college or playing professionally overseas. The demands of playing Division I or II sports may also detract from athletes’ educations.

The scholarships that are available to student athletes are also misunderstood. They are often seen as a “full ride,” but many athletes are not guaranteed the scholarship for the full four years. Until 2012, schools were not even allowed to give out multi-year scholarships. This means that coaches and athletic directors have the power to take away scholarships for players who are not performing while players have less ability to seek recourse. Even for those who maintain their good standing and their scholarships, the value is often not enough to live on, which could tempt some to take money from money from people like agents, violating NCAA rules.

The amateur system in the NCAA is well-known and has sparked several lawsuits and legal actions. Perhaps the most prominent example is Northwestern University football players’ attempt to unionize. The issue remains far from settled, and even if these athletes eventually do get paid, a system for compensation could be particularly complicated given the nature of college sports and the money involved.

The following video provides a good look at the question of amateurism:

March Madness may not be unfair just to the athletes, it also impacts businesses across the United States in the form of lost productivity. According to Challenger, Gray & Christmas, employers may lose as much as $1.9 billion in pay because of the tournament.  This loss in productivity comes in the forms of absenteeism, employees wasting internet bandwidth on watching games, and employees becoming distracted while at work.

To offset this issue, many companies have actually tried co-opting the excitement over the tournament in order to funnel it into still-tangible results. For example, one company, Headwaters MB, threw a barbecue and invited local business leaders to improved morale and develop contacts and potential clients. Not all businesses are able to leverage the tournament to help productivity, but many have at least acknowledged its effects on their employees’ work output.

March Madness is a great time for sports fans across the nation. Not only do they get inundated with almost non-stop action, but they can also form bonds over brackets and friendly rivalries. However, behind all the glory and triumph is a seedier, more practical side to the tournament. This side is concerned with the vast amount of money the tournament generates.

This money is generated by many legitimate means but also through gambling and illegal betting. Businesses also have to suffer losses in productivity as employees find their attention drift from their work to the tournament. On top of all of this is the question of the athlete’s role in the moneymaking. The amateur basketball players generate massive sums but aren’t able to make money for themselves unless they end up playing professionally. While the best approach to the issue remains hotly debated, several court cases and legal actions have attempted to change the status quo.

Bracketography: The Tournament Over Time

The Economist: Amateurism in Sports

CBS Sports: Schools Can Give Out 4-year Athletic Scholarships, but Many Don’t

Fortune: Guess how Much Money Employers Lose during March Madness

Yahoo Finance: March Madness: The $1.5b behind the NCAA tournament

IBT: March Madness 2015: Getting To The NCAA Finals Costs A Lot, But The Rewards For Most Are Slim

Go Banking Rates: Betting on March Madness and NCAA Brackets Could Get You in Legal Trouble

Michael Sliwinski
Michael Sliwinski (@MoneyMike4289) is a 2011 graduate of Ohio University in Athens with a Bachelor’s in History, as well as a 2014 graduate of the University of Georgia with a Master’s in International Policy. In his free time he enjoys writing, reading, and outdoor activites, particularly basketball. Contact Michael at staff@LawStreetMedia.com.
Share:
Related ItemsAdvertisingAmateurCollegiate SportsMarch MadnessNCAANCAA Basketball