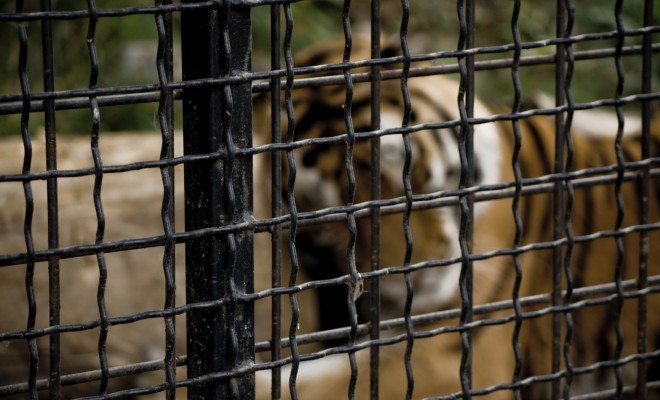 Inside the Cage: Controversial Zoos Might be the Next Animal Rights Crusade

Activists have crusaded for decades for better treatment of animals around the world, but there are certain watershed moments in popular culture that have sparked widespread debate over how we treat animals in the twenty-first century. In 2009, the European Union banned cosmetic testing on animals and the sale or import of seal products. In 2013, the film “Blackfish” achieved massive popularity and opened up a conversation about human treatment of killer whales on an unprecedented national scale. Last year, the death of Cecil the Lion divided popular opinion not only on the subject of hunting for sport but how we value animal lives versus human lives.

The next great animal rights discussion may be inspired not by a violent event but by one that activists have been warning the public about for years: the treatment of animals in the world’s zoos, animal parks, and aquariums. In this globalized age, animals are often traded between zoos for mating purposes or because the original zoo simply does not have the resources to care for a given animal. With this shuffle of ownership, activists worry that there are no guarantees that an animal will be treated humanely throughout its life. Read on for a look at some of the criticisms at zoos across the world:

There are 39 ocean theme parks operating in China right now, the largest of which is Chimelong Ocean Kingdom, famous for its beluga whales and polar bears. Most of the animals displayed in these parks were captured in ways that the China Cetacean Alliance have argued are stressful and frightening for them. Whereas the goal of many zoos and aquariums is to preserve endangered species, a recent report from the China Cetacean Alliance states that:

Due to the lack of a legal definition of ‘animal welfare’ in Chinese laws and regulations, and the absence of specific animal welfare concepts within the laws and regulations relevant to the ocean theme park industry, cetaceans in captivity in China are without proper protection from conditions that can cause suffering.China’s participation in the live capture of free-ranging cetaceans from the waters of both Russia and Japan, and the subsequent import of these individuals, is having a negative impact on the conservation status of some targeted cetacean populations and on the international image of the country for its ability to protect wild animals.

Whereas zoos and wildlife preserves do not require animals to perform tricks or be exhibited multiple times per day, theme parks rely on animals to put on a show throughout the operating hours of the day. Animals displayed in these parks are considered valuable because they can perform a program, not because they are an endangered species.

This view of animals as a commodity has allegedly led to problems–for example, a beluga calf recently died in captivity in a Chinese water park apparently because there was not sufficient space in its tank for it to be nursed by its mother. Although Seaworld’s killer whales featured in “Blackfish” became more aggressive when confined to small pools, there is little risk that the belugas on display will exhibit the same violent tendencies. However, beluga whales are listed as “near threatened,” which means that they do need to be protected both in the wild and in captivity.

There is relatively little oversight of marine mammals in captivity in China, which means that there is no pressure on animal trainers in these theme parks to treat animals humanely. There are challenges with raising any animal in captivity because they are occupying a significantly smaller space than they would in the wild, but the risk for the animal increases dramatically when there are no regulators who can fine or suspend zoos or theme parks who fail to give their animals sufficient enclosure space and exercise.

War-torn Zoos in the Gaza Strip

There are six active zoos in the Gaza Strip. Murphy’s Law (anything that can go wrong, will go wrong) appears to be in full effect in these struggling zoos. The presence of Hamas in Gaza, and the ensuing Israeli and Egyptian blockade, means massive shortages on food and supplies for both humans and animals.

The organization Four Paws launched a crowdfunding campaign to purchase supplies for Gaza’s zoos but as of its trip to Gaza recently, it has only been able to deliver enough feed to keep animals fed for four more weeks. Medical supplies are also in short supply so that if animals don’t die of hunger, they often succumb to disease. The frequent bombing and firefights throughout the Gaza Strip often prevent zookeepers from reaching their animals. In an interview in January, one zookeeper described how neither he nor his team could reach the zoo during a fifty day conflict between Israel and Hamas last year. By the time they finally got back to the zoo, one of the African tigers had starved to death. Furthermore, Gaza’s frequent power cuts make it difficult to run the generators necessary to keep animals warm.

At the Khan Younis Zoo, animals starved to death but were then stuffed and returned to their cages in a desperate attempt to keep the zoo solvent. Unfortunately, the zookeepers have neither the funds nor the transport to move their animals to other zoos in safer environments. Four Paws managed to evacuate three lions from the al-Bisan zoo which had been damaged by major shelling, temporarily resettling the lions in Jordan, but that is the exception to the general trend of animals dying in Gaza.

Elephants in the United States

Although animal rights activism is better organized and vocal in the United States than in other nations, the battle is far from over. This winter, the U.S. Fish and Wildlife Service approved the transfer of 18 elephants from big game parks in Swaziland to American zoos. The transfer is the result of historic drought conditions that are threatening the health of these elephants in their native environment. These elephants are at risk of starving or being trapped in brushfires in the extreme drought (an especially dangerous prospect for young elephants). Rangers in the big game parks are struggling to care for their animals under these extremely taxing conditions. A transfer to the United States will give these elephants access to water, more temperate climates, and the attention of prominent veterinarians.

However, conservationists are disturbed by the movement of these animals to unfamiliar environments that are significantly smaller than the terrain they are used to in the expansive game reserves. Additionally, the shock of being  moved to such a different location may disrupt animal relationships or cause them to become more aggressive. There is no guarantee that these elephants will deal well with either the trip to the United States or their resettlement in American zoos.

The elephants will be sent to zoos in Kansas, Nebraska and Texas, which has prompted rounds of questioning regarding whether these states have the appropriate facilities to host multiple elephants during a harsh winter. While zookeepers have stated they are trying to keep elephants together in their usual social groupings, there is little doubt that the journey across the world will have an impact on each elephant. Animal rights activists are worried not only about the physical health of these animals after they arrive in the U.S. but their mental health, as elephants are social creatures that operate best when included in a herd. Even though all the American zoos are well-funded and have solid track records with animal care, the shock of adjusting to such a different space could be physically and psychologically traumatic for the elephants. The group Friends of Wildlife have already filed a lawsuit hoping to block this transfer of elephants but their claim may not gain traction in time as the elephants are already being prepared for transport.

Zoos are an important space for the conservation of animals and the education of the general public but they are not always as safe as we would like them to be. In Chinese theme parks, where whales and polar bears are kept in spaces that are significantly smaller than their natural environments, there is no requirement to report on animal’s living conditions to a formal advisory board. In Gaza’s zoos, animals die on a daily basis, waiting for the food and medicine that they could easily receive if they were in a different zoo–but there is no pressure from the international community to evacuate them or send them the supplies they need to survive. Animals are comparatively fortunate in the United States but the arrival of a large group of elephants from Swaziland this month may prove disastrous if zookeepers cannot care for them adequately while drought ravages Swaziland. Any one of these three stories could be the one that attracts international attention and sparks a wide-scale commitment to protecting animals living in captivity in this next era of promoting animal rights.

US News and World Report: Gaza Zoo Animals are Suffering

Four Paws: Save the Animal’s of Gaza’s Zoos

Christian Science Monitor: Why Swaziland is Putting 18 Elephants on a Boeing 747

Jillian Sequeira
Jillian Sequeira was a member of the College of William and Mary Class of 2016, with a double major in Government and Italian. When she’s not blogging, she’s photographing graffiti around the world and worshiping at the altar of Elon Musk and all things Tesla. Contact Jillian at Staff@LawStreetMedia.com
Share:
Related ItemsAnimalsaquariumbeluga whalecaptivityChinaElephantsGazapolar bearTheme Parkszoos