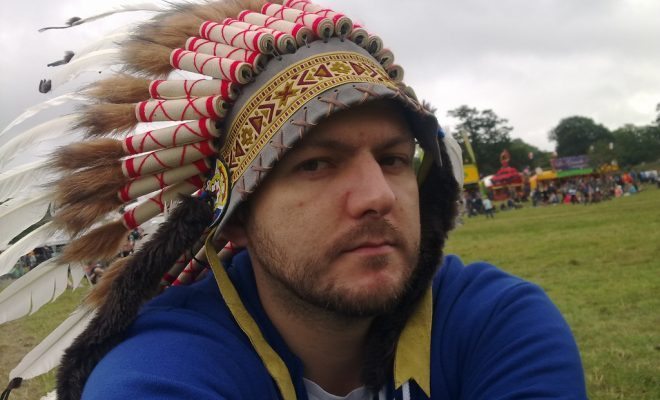 From the time we are in elementary school, we are told that copying from someone else’s paper is wrong. As we get a little older, we are given other names for this copying: plagiarism and intellectual property theft. Often, even those who believe that intellectual property laws are a threat to creativity and equitable access to knowledge recognize that even if something is not illegal, it is better form to give credit where credit is due. But a new question has popped up recently: does this logic apply to culture, as well? Some say yes and call it cultural appropriation. But what exactly is cultural appropriation, and when do we cross the line between appropriation and appreciation?

What is cultural appropriation?

Cultural appropriation is often defined as being similar to intellectual property theft, but with more overt and culturally offensive aspects.

Cultural appropriation is the adoption or theft of icons, rituals, aesthetic standards, and behavior from one culture or subculture by another. It generally is applied when the subject culture is a minority culture or some how subordinate in social, political, economic, or military status to the appropriating culture. This ‘appropriation’ often occurs without any real understanding of why the original culture took part in these activities or the meanings behind these activities, often converting culturally significant artifacts,practices, and beliefs into ‘meaningless’ pop-culture or giving them a significance that is completely different/less nuanced than they would originally have had.

Conversations about cultural appropriation often spring up around Halloween, when young white children dress up as Native Americans, “rappers,” and “gangsters.” These Halloween costumes are widely condemned as racist; reminding white people that “race is not a costume” has become a year-round burden for some. Mohammed “Mo Juicy” Fayaz of the online magazine Browntourage reminds readers that, “The dangers of cultural appropriation go beyond offending people, appropriation continues patterns of disempowering groups that are already marginalized.”

Viewed as a direct continuation of imperialist violence–which assumes that the land, labor, and bodies of people of color are available for white consumption–cultural appropriation “treats all aspects of marginalized cultures… as free for the taking.”

Conversations about the controversy also often come up when discussing music, such as this interview with Azealia Banks over white artists’ cultural appropriation.

But can you really steal a culture?

On the flip side of things, some people believe that accusations of cultural appropriation need to be wielded much more carefully. Arguing that “you can’t ‘steal’ a culture,” American political commentator and linguist John McWhorter asserts that, “with gay white men and black women, for example, it’s not as if the black women are being left without their culture after the ‘theft’ or as if gay white men are somehow out there ‘out-blacking’ the women they ‘stole’ from.” (This refers to white gay men who affect speaking patterns and mannerisms that are often more readily culturally associated with black women.) McWhorter warns that people accusing others of “stealing” culture through appropriation are using the very specific term too loosely. He argues that the loosening of our language allows flippant accusations to be made when more serious issues can be dealt with.

Additionally, accusations of cultural appropriation often generate assumptions about the race, ethnicity, religion, or sexuality of the people involved. This is alluded to by Howell in the video above, which he starts by cautioning viewers not to pre-judge what he says by the color of his skin. He goes on to argue that it is a compliment to people of color (specifically, he is talking about black people) when white people want to engage in aspects of black culture that they find attractive and fun. Reminding his viewers that it is not “wrong” or “low-class” to be black or to perform blackness through dress or actions, Howell argues that cultural appropriation is not actually appropriation at all, but rather a form of a compliment that has the potential to dismantle racist and/or classist assumptions about black people.

In a similar vein, it is often argued that accusing someone of appropriating another culture can force unwanted assumptions onto people. These incorrect assumptions happened to a bride named Krista, who was accused online of cultural appropriation for pictures of her wedding that were posted online. The wedding integrated aspects of Lenape culture, a Mid-Atlantic Native American tribe. Krista, however, reminded online discussants that she has a Lenape background, even though people assumed she was white based on her features and the color of her skin.

Here are some examples of widely-talked about accusations of cultural appropriation in recent pop culture.

Accused by many as putting on a tremendously racist “minstrel show” in her “We Can’t Stop” video and its performance at the 2013 VMAs, Miley Cyrus has been resoundingly condemned by Anne Theriault for having “used black women as props — like, literal props... Miley was, at one point, slapping a faceless black woman on the ass as if she was nothing more than a thing for Miley to dominate and humiliate.” Critics also noted the historical significance of Cyrus’ performance; like so many other white performers before her, Cyrus used black culture and black bodies to re-brand her own image. Her unapologetic use of black women’s bodies to make herself look “cooler” was described by Jody Rosen of Vulture: “Cyrus is annexing working-class black “ratchet” culture, the potent sexual symbolism of black female bodies, to the cause of her reinvention: her transformation from squeaky-clean Disney-pop poster girl to grown-up hipster-provocateur.”

Following Cyrus’ performance there were powerful calls for black female performers to “just say no” to requests to be in her videos or shows in the future. Musician Big Freedia made sure Cyrus knew she wasn’t even succeeding at her attempts to twerk, sardonically offering, “just get me and Miley together so I could give her ass some lessons.”

In the midst of these accusations of Cyrus’ cultural appropriation, however, there were calls to “go easy” on the performer. In the rush to defend Cyrus, Washington Post columnist Clinton Yates asserted that, “it is inherently racist to imply that there is anything wrong with anyone other than black women twerking.” Arguing that the term “hood” connotes affection when said by white people today, McWhorter had a series of questions for those calling Cyrus out on racism. He wanted to know, “How do we know Cyrus isn’t sincere when she says she loves “hood” culture? Because she’s white? I’m afraid that’s a little 1955.”

Entering the realm of accusations of “reverse racism,” these writers argued that cultures are inherently going to borrow from each other whenever they coexist in society. Restraining white people from borrowing from people of color is unfair if the expectation is that it is not culturally appropriate for people of color to adapt aspects of white culture.

In the wake of the highly publicized and protested murders of Trayvon Martin and Eric Garner, the slogans “I am Trayvon Martin” and “I Can’t Breathe” rose to the fore of social justice forums. White people were frequently seen in hoodies claiming to “be” Trayvon Martin, and–as seen above–white people were frequently seen claiming to not be able to breathe. Here, the violent potential of cultural appropriation became explicitly clear to some. White users of the hashtag #AllLivesMatter, or asserting that “I am Trayvon Martin” or “We Can’t Breathe” were accused of cultural appropriation because they were attempting to take the experiences of black people as their own. In doing so, they erased the racist dimensions of police violence by “deracializing” the issue, making it about “All Lives” instead of “Black [and Brown] Lives.”

According to critics, by claiming false solidarity–and thus appropriating the cultural experiences of black people–with the deaths of these and other black people at the hands of police, white people were shifting the focus from #BlackLivesMatter to #AllLivesMatter. These hashtags have been used to refer to two related social movements. #BlackLivesMatter refers to activism attempting to call attention to police violence against black people. #AllLivesMatter refers to activism that states that while police violence against people of color is a problem, it is damaging to focus on race in discussions of police violence. In doing so, people using the hashtag #AllLivesMatter claimed that we live in a colorblind society, which threatens to erase the fundamental violence of racism.

However, the #AllLivesMatter hashtag and protests were largely framed as a response to the shooting of two police officers in New York City. These activists pointed out that in addition to black lives mattering, as Raleigh Police Chief Cassandra Deck-Brown stated, “I must say that blue lives do matter. But as I close, I must say that we as a community must begin to recognize that all lives matter.” Basing their rhetoric off of an impulse to ensure that people didn’t feel threatened by, but rather welcomed to join in solidarity with protests surrounding the violent deaths of young people, #AllLivesMatter advocates have decided that it is more important to embrace a less specifically racial call in favor of avoiding any accusations of divisiveness.

ALL LIVES MATTER! United We Stand! Divided We Fall.. Let's Get it together! ✊ #AllLivesMatter… http://t.co/uJmI7h8bG0

In a scathing critique of Cyrus’ performances as cultural appropriation, Dodai Stewart cautioned readers, “Let’s not get it twisted: The exchange and flow of ideas between cultures can be a beautiful thing. I believe in cross-pollination and being inspired by those whose experience is not like your own.” There’s obviously no clear line here. Perhaps the key is constantly checking in on the impacts of actions, all the while drawing and abiding by distinctions between admiration and exotification, inspiration, and appropriation.

Daily Beast: You Can’t ‘Steal’ a Culture: In Defense of Cultural Appropriation

Colorlines: On Saying No to Miley Cyrus, the Habitual Cross-Twerker

Huffington Post: What Miley Cyrus did was Disgusting — But Not for the Reasons You Think

Washington Post: Miley Cyrus and the Issues of Slut-Shaming and Racial Condescension

Jezebel: Yes, All Lives Matter. Now Shut Up About It

Georgia Political Review: ‘I Am Not Trayvon Martin’: Dismantling White Privilege in Activism

Jennifer Polish
Jennifer Polish is an English PhD student at the CUNY Graduate Center in NYC, where she studies non/human animals and the racialization of dis/ability in young adult literature. When she’s not yelling at the computer because Netflix is loading too slowly, she is editing her novel, doing activist-y things, running, or giving the computer a break and yelling at books instead. Contact Jennifer at staff@LawStreetMedia.com.
Share:
Related ItemsAzealia BanksBlacklivesmatterCultural AppreciationCultural AppropriationFergusonHalloweenHashtagsMiley CyrusPolicePoliticsRacismTwitter