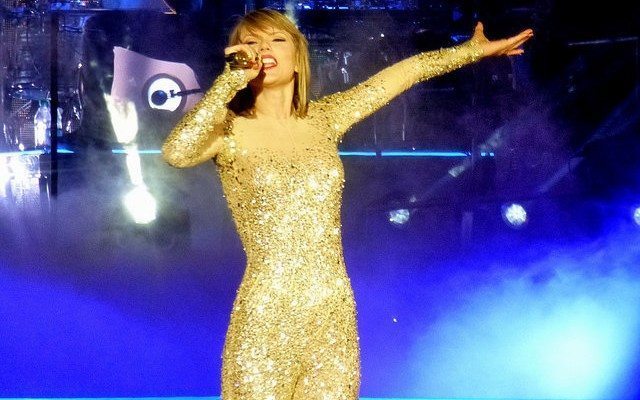 America’s favorite (or least favorite, depending on who you ask) blonde is back in the headlines this week: Taylor Swift is being sued by musician Jessie Braham over the lyrics to her song “Shake it Off.” Even though neither the lyrics nor the melody of Braham’s song are identical to Swift’s song, he has launched a lawsuit worth $42 million, and has also demanded he receive writing credit on Swift’s song. Braham’s case seems less than credible and with the massive legal resources at her disposal, it is almost inevitable that Swift will never pay him a cent–yet Swift’s case is only the latest in a string of high profile intellectual property lawsuits involving pop stars.

Earlier this month, Jay-Z and Timbaland defeated a lawsuit brought against them by Osama Ahmed Fahmy, who claimed the duo’s song “Big Pimpin'” had infringed upon the copyright of his uncle Baligh Hamdi’s song “Khosara Khosara.” Timbaland had already paid $100,000 in 2001 to secure the usage of the flutes from Hamdi’s song as a sample for the track, but Fahmy argued that the rights to the sample were invalid. After testimony from both Jay-Z and Timbaland, the judge threw the case out. Fahmy’s lawyer announced plans to appeal the decision, but with the massive legal power behind the hip-hop duo, Fahmy is fighting an uphill battle.

Copyright lawsuits against singers and songwriters are nothing new–but what are the legal bases for these kinds of suits? Read on to learn about the history of copyrights in music and the current cases in play.

The Complexities of a Copyright Case

Protects a literary, musical, dramatic, choreographic, pictoral or graphic, audiovisual, or architectural work, or a sound recording, from being reproduced without the permision of the copyright owner…the author(s) may transfer the copyright to any other party if she(they) choose(s) to do so. Subject to certain limitations, the owner of a copyright has the sole right to authorize reproduction of the work, creation of a work derived from the work, distribution of copies of the work, or public performance or display of the work. This right lasts for the life of the author plus fifty years; or in the case of a copyright held by an entity, for seventy-five years.

Copyright law is well-defined and there is a substantial legal precedent in the U.S. that protects authors from losing the rights to their content. However, modern music relies heavily on multiple producers and record labels, instead of a single artist recording and copyrighting their work. Increasing the number of “authors” increases the complexity of the copyright and leaves more openings for copyright infringement suits in the future.

Music has also been transformed by the introduction of sampling–taking pieces from a pre-existing song and incorporating them into the melody of a new song. Sampling in modern American music was born in the 1970s, as hip hop DJs experimenting with multiple turntables mixed samples from older songs with newer hip hop records. The 1980s created a new variety of dance and pop music, and sampling spread quickly from the alternative world of hip hop into the mainstream. When so many hit songs are reliant on samples, it is difficult to discern where sampling ends and copyright infringement begins. Most artists pay for the rights to sample a given track, but there are many pieces that are considered part of the public domain or that are old enough that artists assume that the copyright has expired on them, making them fair game for an unlicensed sample. There is also a “50 second/5 second, 8 bar/1 bar” myth in the music industry that informs artists that if they use brief enough clips of another song, it does not technically count as a sample and they do not need to file for the privilege to use that song. In reality, the Sixth Circuit Court of Appeals ruled in 2004 that:

The use of a two-second sample was an infringement of the sound recording copyright. The court went further stating that when it came to sound recording there was no permissible minimum sanctioned under copyright law.

Major pop artists who have to promote albums and perform in the public eye should be less likely to commit copyright infringement. They are signed to major labels that have impressive legal departments, are surrounded by handlers who vet all of their songs and work with production teams that are familiar with the intricacies of copyright law.  Yet prominent members of the music world still violate copyright law, both on purpose and unintentionally. The “Blurred Lines” case of 2015, which resulted in Robin Thicke and Pharrell Williams paying $5.4 million in damages to Marvin Gaye’s family, represents the ambiguous nature of copyright law in pop music. Thicke and Williams did not directly sample Gaye’s hit “Got to Give it Up” but they claimed that they were “inspired” by Gaye’s work. It is not up to the legal system to police what inspires an artist, but that word can cover all manner of sins. Let’s examine the 1950s and 1960s as a case study of what happens when musicians are “inspired” by their contemporaries–and disregard copyright law on their way to the recording booth:

Copyright Conflict and Rock and Roll

Copyright infringement is by no means a recent trend in the music world. In the 1950s, copyright law was hardly the organized mechanism that it is today and it was not applied to protect all races and genders equally. Well-publicized lawsuits regarding copyright infringement may seem like a recent development, but the theft of intellectual property has been thriving for decades in the music industry. One of the most infamous cases of plagiarism in American musical history involves black jazz and blues musicians of hte 1950s. Examine, for example, Chess Records, the Chicago-based record label that launched Muddy Waters, Chuck Berry, Etta James, Little Walter and Howlin’ Wolf. The artists signed to the Chess Records label were pioneers of blues and rock and roll, influencing countless musicians, including the Rolling Stones, who named their band after one of Muddy Waters’ original songs. Although Chess Records’ musicians were legends in their own time, they were often denied paychecks or paid significantly less than their white contemporaries. Furthermore, some musicians blatantly stole content from the Chess Records stable. Both Willie Dixon and Chuck Berry filed suit against multiple artists for stealing their melodies and lyrics–the most famous of these lawsuits was leveled against the Beach Boys for their unlicensed use of the melody from Berry’s “Sweet Little Sixteen” in their song “Surfin’ USA.”

Then there is the problematic nature of Elvis Presley’s success. It is obvious that Elvis was an incredible talent who shaped modern music, yet his success also relied greatly on black rock and roll music. The famous song “Hound Dog” was in fact originally recorded by “Big Mama” Thornton and Elvis’ version was intended to be a cover, yet history has painted his rendition as the original. Presley openly acknowledged that his music was inspired by black pioneers yet he has consistently received a far greater share of the credit for the rock and roll revolution than any of his black contemporaries. Elvis did not invent the style in which he sang and danced, he simply made it popular with white audiences. Elvis did not directly infringe upon the lyrics or melodies of other artists, but imagine if he was singing on stages across the country today. Would Thicke and William’s “inspiration” argument apply to his music or would he be taken to court? If music is a medium that incorporates the most exciting aspects of our predecessors’ lyrical and melodic abilities, their stage presence and public personas, where do we draw the line between a heartfelt tribute and plagiarism? These are still questions we struggle to answer today.

Modern copyright legislation has expanded and adapted to protect authors regardless of race or record label.  Beginning in the 1990s, the Supreme Court and host of other appellate and circuit courts ruled on various intellectual property cases in the music industry, largely coming down on the side of the authors. In 2012, the introduction of SOPA and PIPA represented a conscious legislative shift towards protecting intellectual property in the Internet age. In 2015 alone, ten bills have been proposed to expand copyright holders’ privileges and protections. However, despite this extended legislative protection, authors may still struggle to receive damages in a lawsuit. The Blurred Lines case was exceptional because it is one of only a handful of music copyright infringement cases in the past decade in which significant damages were awarded to the defendant. The defendants (Marvin Gaye’s family) had access to a powerhouse of a legal team, but not every author has access to such representation. Without sufficient funds and skilled legal representatives, many authors may not be able to pursue a lengthy and bureaucratic court battle.

Copyright lawsuits are not a novel phenomenon in American music. While the spike in high-profile musical lawsuits in the past two years may suggest that litigation is becoming more popular in the music industry, it is less the lawsuits themselves that are garnering our attention than the artists. When major pop stars are put on trial for copyright infringement, the spotlight is thrown onto the complex and unpredictable nature of intellectual property law. However, that focus only stays on the issue for as long as the pop star takes the stand–the minute they are acquitted, we lose interest in their copyright compliance. Many cases of copyright infringement are flimsy or invalid, but it is important to treat them with respect.  Our favorite musicians may make us dance and cry and air guitar, but they don’t have the right to profit off of other’s hard work.

Thomas Kennedy: The History of Sampling

Time: Elvis Rocks. But He’s Not the First

The Atlantic: Getting Elvis’s Legacy Right

Stanford University Libraries: Copyright Law Changes that May Affect You

Jillian Sequeira
Jillian Sequeira was a member of the College of William and Mary Class of 2016, with a double major in Government and Italian. When she’s not blogging, she’s photographing graffiti around the world and worshiping at the altar of Elon Musk and all things Tesla. Contact Jillian at Staff@LawStreetMedia.com
Share:
Related ItemsCopyright InfringementCopyright LawJay ZTaylor Swift