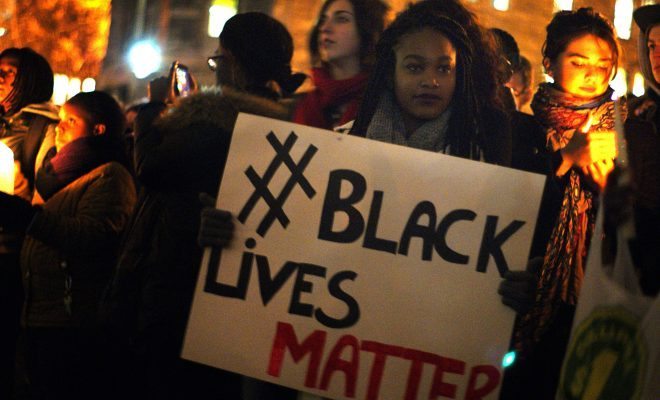 #BlackLivesMatter: How a Hashtag Sparked a Powerful Movement

Beginning as a social media hashtag, #BlackLivesMatter developed into a movement and became a leading force in the fight against police brutality and racism across the nation. People from all walks of life are uniting for justice, are inspired to speak up, and most importantly are ready to take action. But how did #BlackLivesMatter reach the masses? How has it developed into such a profound transformational force? Read on to learn more about #BlackLivesMatter, its inception, and the movement to end police brutality and racial inequality in the United States.

#BlackLivesMatter (BLM) is a movement that focuses on anti-African-American racism in the United States. It was founded by three Black women: Alicia Garza, Patrisse Cullors, and Opal Tometi. Although it began as a social media hashtag, they created the infrastructure for the overall campaign, framing it as “not a moment, a movement.”

According to #BlackLivesMatter, racism is still prevalent in American society through the marginalization of Black communities, which are intentionally left powerless and voiceless. In this regard, the movement asserts the right of all Black people to liberation.

The Inception and Evolution of #BlackLivesMatter

#BlackLivesMatter was created after Trayvon Martin, a 17-year-old African-American boy from Florida, was fatally shot by George Zimmerman, a neighborhood watch volunteer, on February 26, 2012. In July 2013, Zimmerman was acquitted of all charges.

The outcome of the trial led to resentment from Black communities, and America as a whole, as Martin was unarmed when Zimmerman shot him. The day after the acquittal, people took to the streets in major cities including Miami, New York, Washington D.C., Chicago, San Francisco, Newark, St. Louis, Los Angeles, Milwaukee, and Charlotte. More than 100 U.S. cities held demonstrations in support for Trayvon Martin.

Garza, one of BLM’s co-founders, used Facebook to express her outrage over the fact that nobody was held accountable for the death of an unarmed Black teenager. She finished her sentence with the phrase “we got us and our lives matter.” Cullors went further and added the hashtag #BlackLivesMatter when re-posting her friend’s message. People started to use this hashtag when talking about racism and extrajudicial killings of Black men in police custody. As a result, #BlackLivesMatter was born as a national organizing project. Watch the video below to learn more about #BlackLivesMatter from Garza.

Nearly a year later on July 17, 2014, Eric Garner died in Staten Island, New York, after a police officer allegedly put him in chokehold for 15 seconds while trying to take him into custody. That’s when #BlackLivesMatter started to solidify as a movement. According to Elephrame, a social media tracking website, two days after Garner’s death, more than 300 people marched in Staten Island, including Garner’s family.

Less than a month after that, on August 9, 2014, 18-year-old African-American Michael Brown, was shot to death by Darren Wilson, a white police officer in Ferguson, Missouri. Demonstrations became pervasive in cities both large and small. Thousands of people travelled to Ferguson to participate in marches, demanding justice for Brown and other victims of police violence. The #BlackLivesMatter hashtag became omnipresent on Twitter in relation to Ferguson protests and racism in general. More than 119 cities participated in a National Moment of Silence honoring the many Black citizens who have died as a result of police violence. Watch Oakland residents speaking on Ferguson and #BlackLivesMatter protests in the video below.

During the ensuing months, divided demonstrations continued to transform into a collective force. At the end of November 2014, 12-year-old Tamir Rice was shot and killed by a police officer in Cleveland, Ohio. As the Staten Island grand jury declined to indict the New York police officer who used the chokehold to take Garner into custody on December 3, 2014, people began to demand justice even more fiercely. More demonstrations were held, reaching as far as Paris, London, and Melbourne. By the end of 2014, #BlackLivesMatter was already a strong platform for many protesters, with a broader mission, and a list of demands.

The movement carried into 2015. BLM continued to incite discussions in academia, art communities, religious establishments, and high schools and universities. A #BlackLivesMatter exhibit was featured in an art gallery in Seattle, providing viewers with different perspectives on the movement. Cornell University Africana Studies and Research Center held a community talk about #BlackLivesMatter and the current state of activist movements, taking a social history perspective. These are only few examples of the movement’s proliferation and effects.

On March 4, 2015, a St. Louis County grand jury acquitted Wilson of all charges in the death of Michael Brown. The actions of protesters became even more pronounced, disrupting public transportation and shutting down highways and bridges while marching for Michael Brown, Tamir Rice, Eric Garner, and many others.

On April 19, 2015 another Black man, Freddie Gray, died in the hospital after he was taken into custody by the Baltimore police. The events that followed shook the whole country as protests turned violent in some areas. Some police officers were injured, a state of emergency was declared, the National Guard was activated, and a 10 p.m. curfew was established in Baltimore. However, all officers involved in Gray’s death were charged with a range of crimes, including murder and manslaughter. During these latest events, many local chapters of #BlackLivesMatter marched in solidarity with Baltimore, including those in Chicago, Ferguson, and New York.

In the last 289 days, there were 431 general demonstrations and 430 for individual victims of police brutality, totaling at least 861 #BlackLivesMatter demonstrations.

#BlackLivesMatter has a visible connection to other movements across the nation and abroad. Nationally, Palestinian solidarity activists, the low-wage workers movement, and Black Youth Project 100 (BYP 100) among others, all marched in support of BLM. In addition, medical students at 70 colleges, the so-called “White Coats for Black Lives,” held demonstrations in #BlackLivesMatter support. Internationally, Hong Kong’s pro-democracy marches and London’s Campaign Against Police and State Violence, among others, also stood in solidarity with the #BlackLivesMatter movement and its cause.

The main tactic of the #BlackLivesMatter movement is to disrupt business as usual, including work, commuter travel, commerce, and other daily activities of U.S. residents. The rationale behind this tactic is based on the premise that people across the country need to wake up and recognize that anti-Black racism is a pervasive part of American society. BLM protesters disrupted traffic on Interstate 93 in Boston, shut down the BART station in West Oakland, California, partly shut down the Mall of America, and disrupted business as usual in many other places, all in the hope of drawing attention to its cause.

What does #BlackLivesMatter aim to do?

#BlackLivesMatter put forward national demands and a vision for a new America. It seeks legal redress in the Michael Brown case, and asks the government to release the names of all officers involved in killing Black people for the last five years. It also calls for the creation of an advocate’s network that can institute changes across police departments, and demands that the federal government discontinue its supply of military weapons to police departments across the country. #BlackLivesMatter also demands more re-investment programs, specifically, re-directing law enforcement funds to federal departments charged with providing employment, housing, and educational services.

According to #BlackLivesMatter, its vision for a new America is as follows:

We Want an End to all Forms of Discrimination and the Full Recognition of our Human Rights. The United States Government must acknowledge and address the structural violence and institutional discrimination that continues to imprison our communities either in a life of poverty and/or one behind bars. We want the United States Government to recognize the full spectrum of our human rights and its obligations under international law.

In its vision, the movement includes not only the end of racially charged police violence and structural changes in police departments across the states, but also demands decent housing, quality education, and the end of the prison industrial complex and the school-to-prison pipeline.

#BlackLivesMatter developed rather specific proposals with regard to the de-militarization of local law enforcement departments across the country, including requesting a comprehensive review by the Department of Justice into systematic abuses by police departments, and the repurposing of law enforcement funds to support community-based alternatives to incarceration. While not all demands are specific and policy oriented, BLM is working in conjunction with think tanks and non-profits such as the National Organization for Women and Race Forward: The Center for Racial Justice Innovation, to continue conceptualizing policy aims.

Even though many Americans support #BlackLivesMatter, there are those who simply don’t believe that racism in the justice system exists. In this view, African Americans encounter law enforcement frequently because they commit more crimes, thus more of them end up in the prison system. Police officers are viewed as protectors of public order, while African Americans are seen as solely responsible for the current state of their community. Watch the video below to learn more about this point of view.

In addition, an #AllLivesMatter hashtag was created to counteract the #BlackLivesMatter movement. In this view, law enforcement should treat all people with respect and dignity. The rationale is as following: if #AllLivesMatter, then #BlackLivesMatter too. Essentially, #AllLivesMatter protesters are making a point of including all races in the conversation about police brutality; however, supporters of #BlackLivesMatter as well as its founders consider such phrasing an act of colorblindness that completely excludes race from the equation, devaluing the whole point of the movement.

#BlackLivesMatter has already established itself as a movement for social change, transforming isolated incidents of police brutality into a larger agenda of eliminating racial inequality in American society. It’s impossible to predict if the movement will be able to sustain itself until it reaches its goal and the government meets BLM’s demands; however one thing is sure, #BlackLivesMatter is already changing peoples’ perceptions of racial inequality in America, creating dialogue, and clearing out the path for future leaders who will take on the issue of anti-Black racism.

Occupy: Black Lives Matter: The Evolution of a Movement

Huffington Post: Reactions on the Streets After the George Zimmerman Verdict

Huffington Post: What People Are Really Saying When They Complain About ‘Black Lives Matter’ Protests

Boston Globe: Protesters Snarl Morning Commute on I-93 Near Boston