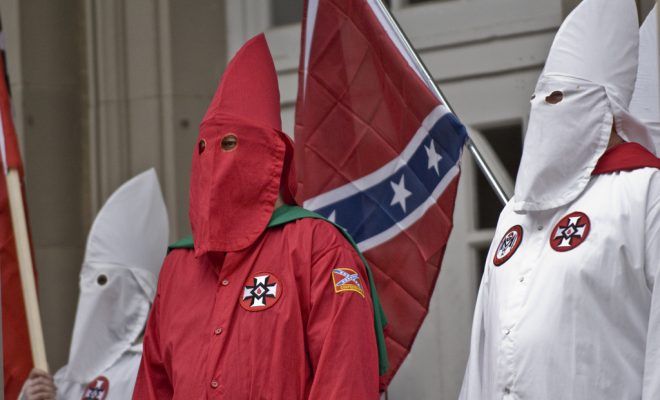 After the Ku Klux Klan (KKK) organized a rally over the weekend to protest the removal of a confederate monument in Charlottesville, Virginia, thousands of counter protesters gathered to voice their disgust.

The Charlottesville City Council recently voted to remove a monument of Confederate General Robert E. Lee, but the KKK claims it is part of a sweeping effort to erase white history. The protest was held a block away from Emancipation Park, formerly Lee Park, which was recently renamed. But the statue of Lee riding a horse has yet to be removed.

City Councilwoman Kristin Szakos wrote in an editorial that the council’s decision was made to join a “growing group of cities around the nation that have decided that they no longer want to give pride of place to tributes to the Confederate Lost Cause erected in the early part of the 20th century.”

A court order has delayed the removal of the statue until a hearing next month that may just be a precursor to an elongated legal battle, according to NPR.

Not only is the town home to the University of Virginia, but it was also the home of American founding father Thomas Jefferson, and is near his Monticello estate.

Sunday’s protests featured about 30 Klansmen, many of whom arrived armed with handguns, and approximately 1,000 counter protesters, according to the Washington Post. The KKK was escorted by police clad in riot gear as they entered and exited.

The fact that the police force, comprised of local, county, state, and university police, protected the Klansmen, left a bad taste in plenty of people’s mouths after seeing police disproportionately use violence to subdue African-American protests.

The KKK is a hate group. Police are keeping them safe. When Black folks protest for our right to life, police harass and harm us. https://t.co/eVv9Vf4e7m

Charlottesville Mayor Mike Signer previously urged the town’s residents not to “take the bait — to deny the KKK the confrontation and celebrity they desire,” but thousands still felt compelled to voice their disgust with the group’s resurgence.

While the Klansmen attempted to speak publicly to the crowd at multiple points, they were inaudible and drowned out by the noise made by the counter-protesters. Jalane Schmidt, a professor at the university and a vocal supporter of the removal for Lee’s statue, was among the group gathered at the park. She told the Washington Post:

It is important for me to be here because the Klan was ignored in the 1920s, and they metastasized. They need to know that their ideology is not acceptable…I teach about slavery and African American history, and it’s important to face the Klan and to face the demons of our collective history and our original sin of slavery. We do it on behalf of our ancestors who were terrorized by them.

By the end of the day 22 people had been arrested while three others were hospitalized. Two of the medical issues were due to the heat while the other was alcohol-related, according to the Washington Post.

The Klansmen were members of the Loyal White Knights of the Ku Klux Klan, based in Pelham, North Carolina, about 140 miles across the Virginia border. The group was compelled to fight, in their view, the eradication of white history. While most protesting the statue’s removal were part of the KKK, others, like Brandi Fisher, drove hours from neighboring states to join and voice their concerns.

“I don’t agree with everything the Klan believes, but I do believe our history should not be taken away,” said the West Virginia native. “Are we going to remove the Washington and Jefferson memorials because they were slave owners?”

The KKK also staged a protest last month alongside white nationalist leader Richard Spencer in which the group ominously marched with torches to protest the council’s decision. That earlier protest also drew condemnation from citizens and even Virginia Congressman Tom Perriello.

Get your white supremacist hate out of my hometown. https://t.co/KfkxHImvze

Once the protests ended on Sunday afternoon, police escorted the Klansmen out and asked the counter protesters to disperse. After the police decided the remaining crowd was “an unlawful assembly,” the police force donned masks and released gas canisters to disperse the crowd, according to the Washington Post.

Last month the Anti-Defamation League released a comprehensive report on the current presence of the KKK in the United States. According to the research, there are about 3,000 people who strongly identify with Klan ideology and there are 42 active groups across 33 states. The report also states that many of the chapters have joined forces with each other or with neo-Nazi groups in order to show strength and unity. As a result, groups have beliefs ranging from “traditional” white supremacist beliefs to Christian Identity, “a longstanding racist and anti-Semitic religious sect,” according to the ADL Report.

Several white nationalist groups have obtained permits for yet another rally on August 12, so there will likely be more conflicts like these in the future. With racial tensions heightened since the 2016 election, these feuds over confederate monuments are just one example of the conflicts that continue to arise between white nationalists and more progressive communities.

Josh Schmidt
Josh Schmidt is an editorial intern and is a native of the Washington D.C Metropolitan area. He is working towards a degree in multi-platform journalism with a minor in history at nearby University of Maryland. Contact Josh at staff@LawStreetMedia.com.
Share:
Related ItemsAmericaCharlottesvilleConfederacyConfederate StatuesDonald TrumpKKKKu Klux KlanPolicePoliticsProtestRacismRichard SpencerUnited StatesUniversity of VirginiaVirginia