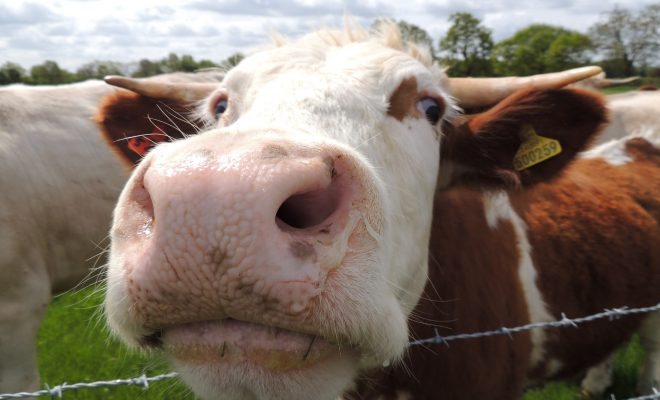 How Does the Livestock Industry Impact the Environment?

Globally, we eat more meat now than ever before. Cultures that traditionally held vegetarian diets have become steadily more meat-oriented. In many areas, meat is seen not only as a delicacy but also as a luxury expense and a symbol of status. As the production of meat has gone up in recent decades and the cost has steadily dropped, meat is now much more affordable than ever before. This has led to what is referred to as a “global meatification of our diets.”

However, this new trend carries with it a series of environmental burdens. The livestock industry creates enormous amounts of waste, generates pollution, and also releases large amounts of methane into the atmosphere.

Vegetarian farming methods generally require large-scale irrigation and sometimes pesticides and fertilizers as well. Livestock farming, alternatively, requires keeping animals alive, which requires land, food, and water for the animals. Because of this, animal farms are also dependent on grain farms to create a food source for their animals. This food could be eaten by humans directly, but instead is used over a long period of time (in combination with a variety of animal growth hormones) to get an animal to an edible size. In fact, more than two-thirds of all agricultural land worldwide is dedicating to feeding livestock. In contrast, only eight percent of agricultural land produces food exclusively for humans. The land used for animal grazing, as well as the land that goes to specialized crop production for livestock animal diets, often causes mass scale deforestation: in the last 40 years, an estimated 40 percent of the Amazon trees were taken down with the vast majority of this land going to livestock feed production. Freshwater is also a finite resource that’s being used in mass quantities for irrigating animal feed and nourishing the animals.

Every bite of meat that is eaten represents all the various inputs that went into raising that animal to adulthood. NPR published a report showing that a single quarter-pound of beef requires 6.7 pounds of grain, 52.5 gallons of water (for the cow’s personal needs and also for watering the crops it ate), 74.5 square feet of land for grazing, and 1,036 BTUs (British Thermal Units) of fossil fuel energy for food production and transport. If you calculate the amount of water required to sustain an American citizen, the average meat eater requires no less than 4,800 gallons whereas a vegan only needs 300. But when the average consumer eats a burger, all they will see is the finished product while the hidden costs remain unnoticed. Herein lies part of the problem with the meat industry: all of its worst elements aren’t ever visible to consumers who decide what kinds of food they want to spend their money on.

First, fossil fuels are used to make the pesticides and fertilizers that keep grain crops growing rapidly and protected from insects. These inputs are essential to many of the traditional commercial vegetable farms throughout the world, which is a serious problem for the environment on its own. However, specialized grain or corn crops are created specifically to sustain livestock, which adds an unnecessary burden that wouldn’t exist without the meat industry. Carbon dioxide emissions also necessarily come with the large-scale transport of meat to grocery stores and restaurants throughout the world. Some of the largest meat-producing nations–such as the United States, Brazil, and the Netherlands–also export meat products to other countries, sometimes halfway around the world.

However, transportation actually only accounts for about six percent of livestock emissions. Ten percent comes from manure storage and disposal, 39 percent comes from food processing and production, and 44 percent comes from enteric fermentation. Enteric fermentation is the process by which a cow’s stomach digests its food and releases greenhouse gasses as a result. Interestingly, while the typically unnatural corn-based diets (in concert with a constant stream of growth hormones and medications) dramatically worsen the health of cows, grass-fed cows actually release far more greenhouse gasses than corn-fed cows. This is because the roughage eaten by grass fed cows is high in cellulose, which is then broken down into methane during anaerobic digestion. In contrast, commercial farm cows generally subsist off of foods that are low in cellulose and high in simple sugars. Because of this, grass fed cows can release up to two to four times as much methane as commercial cows.

As a greenhouse gas, methane has as much as 86 times the heat-trapping power of carbon dioxide over a 20-year period. Methane only stays in the atmosphere for about 12 years while carbon dioxide can remain for hundreds; however, in terms of a greenhouse gas’s ability to rapidly impact global warming, methane is considered to be far more dangerous.

Methane emissions from a single dairy cow amount to the equivalent of up to 1.5 metric tons of carbon dioxide each year. Globally this adds up to the equivalent of  2.2 billion tons of carbon dioxide per year. The Food and Agricultural Organization of the United Nations (FAO) calculated that cows contribute 53 percent of the world’s human-related nitrous oxide and 44 percent of its methane. There has been some debate over exactly how much the livestock industry contributes to climate change. The FAO claims that the livestock industry releases 14.5 percent of global anthropogenic greenhouse gasses.

However, the FAO’s analysis has been criticized for being conducted exclusively by livestock specialists, not environmental specialists, and for understating the extent of livestock’s impact on climate change by overlooking and undercounting related emissions sources. The FAO has also been criticized for having a partnership with the International Meat Secretariat and the International Dairy Federation. Current and former World Bank environmental specialists conducted their own study and argue that livestock actually accounts for 51 percent of the world’s anthropogenic greenhouse gasses–much more than the 14.5 percent estimated by the UN.

Livestock as a Public Health Issue

In some areas, the growth in meat consumption has had a positive impact on the diets of the local people. This is particularly true in food insecure regions such as some areas in Sub-Saharan Africa where meat is an important source of protein. However, the livestock industry has also posed a danger to public health in several facets of life. The first is simply through pollution. Fertilizers and pesticides used to grow feed crops are washed away in runoff and taken to streams and rivers. On farms, animal manure is swept away by that same runoff and taken to water sources where it can contaminate drinking water with fecal bacteria.

A red meat-based diet can also be unhealthy. Regular consumption of meat can raise cholesterol and lead to cardiovascular disease and cancer down the road. Furthermore, the unnatural diets and regimen of growth hormone that we administer to livestock essentially keeps them sick, which also requires constant medication. Almost 80 percent of all antibiotics sold in America are used for livestock and not for people.

The diets we force upon animals can also potentially impact our own health when we consume them. For instance, many of the pathogens and bacteria that develop in cows stomachs can be easily killed by our stomach acids. However, as we continue to modify their diets we’ve caused cow stomachs to become increasingly more acidic as well. In the worst case scenario, this could lead to dangerous pathogens, such as E.Coli, adapting to live in a more acidic environment and potentially being able to survive in our stomachs as well.

Despite many problems in the livestock industry, the popularity of meat is only projected to continue increasing. Some anticipate meat demand to double expected to double by 2020. Although some organizations dispute the validity of this projection, most agree that meat consumption will continue to increase in the coming years. If humans don’t manage to reduce our global greenhouse gas emissions by 2020, then the globally accepted goal of limiting warming to 2°C will be extremely difficult to accomplish. Without dramatic changes to the livestock industry, these reductions will never be able to happen.

A traditional meat-based diet simply isn’t sustainable for the entire planet. However, the majority of the current problems with the industry are far out of consumers’ sights. As long as meat continues to get cheaper and people enjoy how it tastes, its popularity will continue to grow as well. Greater transparency on the issues might change public perception of the industry and shift consumer attitudes. Another possible solution could be an increased emphasis on alternative lifestyles, whether they be vegetarian based or just focused on eating from small, more sustainable livestock farms. The FAO actually suggests that we intensify the commercial livestock industry in order to reduce and eliminate the greater degree of emissions that comes from grass fed cows as opposed to commercial farm cows. Whatever the method may be, it’s clear the world can’t continue to consume meat at such alarming rates.

Editor’s Note: This post has been updated to clarify the debate over livestock’s effect on climate change and its share of human-related emissions. Additional information has also been added about the implications for grass-fed cows on methane emissions and the environmental effect of commercial farms has been clarified. Additionally, methane is now thought to have 86 times the heat-trapping power of carbon dioxide, not 25 times as scientists previously believed. The post has been updated to reflect that change. Updates also add context the debate over the projected growth in meat demand by 2020.

Food and Agricultural Organization of the United Nations: The Role of Livestock in Climate Change

Food and Agricultural Organization of the Unite Nations: Key Facts and Findings

Reuters: Grass-Fed Beef Packs a Punch to the Environment

NPR: A Nation of Meat Eaters: See How it All Adds Up

Salon: What Nobody Told Me About Small Farming: I Can’t Make a Living