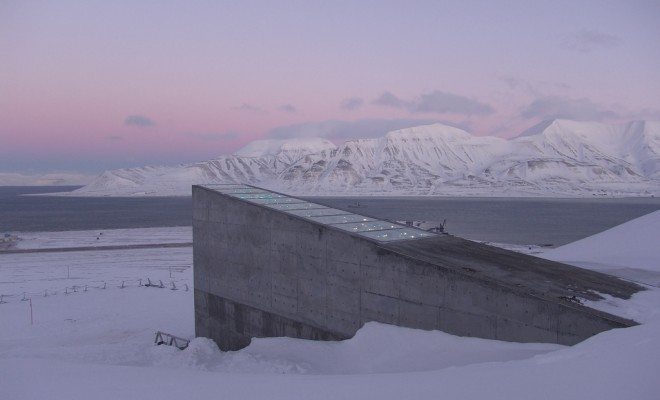 Seeds of Hope: Inside the Doomsday Seed Vault

October 19 marked the first time in history that the Svalbard Global Seed Vault was opened up for a withdrawal. Often referred to as the “doomsday vault,” the seed vault was built to serve as a backstop for plant extinction, storing seeds for individual countries to ensure that plant diversity is not lost in a catastrophe. While weather disasters and global warming pose significant threats to the future of agriculture, the recent withdrawal was the result of the war in Syria. Researchers sought additional seeds as the multi-year war significantly reduced their supply of drought-resistant wheat.

The idea of a last-resort vault full of the world’s seeds may surprise many, but the planning and implementation of the world’s seed bank have been a long and thought-out process. Read on to learn about the process that created the vault and ultimately how it will be used in the future.

The practice of protecting and storing seeds dates back as far as the start of agriculture itself. The exercise started with farmers in the fertile crescent keeping a surplus of seeds, from harvest to harvest, in a variety of secured locations to ensure the survival of their crops.

The process of securing seeds continued in the modern era and the technology has advanced. Today, many seeds are kept in gene banks. According to the Crop Trust, there are currently over 1,700 such gene banks worldwide, which house a variety of different seed species for protection and research.

The groundwork for the international seed vault was laid with the International Treaty on Plant Genetic Resources for Food and Agriculture in 2001. The treaty was a product of the Food and Agriculture Organization at the United Nations and sought to promote international cooperation to preserve plant diversity. Because issues like climate change and water availability highlighted the threats to seed banks on a local level, researchers sought to create the universal vault that could protect diversity in light of the emerging threats.

The seed vault was established in 2008, as a way to prevent the extinction of plant species used for crops. It earned its nickname, the “doomsday vault” because it is designed to survive nearly any catastrophe imaginable. From earthquakes to nuclear war, the vault was built in the permafrost on an island north of Norway. While its nickname sounds like something out of a movie, the location of the vault appears to justify it.

The vault itself sits in Svalbard, Norway on the side of a frozen mountain. In fact, the facility is so remote that it is closer to the north pole than it is to Norway. In addition to being remote, the facility it is also heavily secured with four locked areas between the vault and the outside world.

The site itself was also strategically designed. The vault is located in an area with low humidity and notable geological stability, which protects it from earthquakes. Additionally, it is high enough up in the mountain that there is little risk of flooding, even in the event of rising seas due to global warming. The seeds are contained in foil packages inside of boxes on shelves within the vault. The following video provides a look into the vault:

Since its opening in 2008, the vault’s storage has accumulated approximately 865,000 seeds from seed banks all over the world. The facility has the capacity to hold up to 2.5 billion total seeds, which is equivalent to 500 seeds for each of the roughly 4.5 million crops grown on the planet. The seeds themselves are kept at 0.4 degrees Fahrenheit, but in the event of a power outage its location in permafrost will preserve the seeds naturally for long periods.

While the recent withdrawal may seem like cause for concern, it is actually an example of why the vault was originally built. Researchers at the International Center for Agricultural Research in the Dry Areas (ICARDA) withdrew some of their seed deposits from the vault in order to move their research to new facilities in Lebanon. The withdrawal will help researchers replenish their supply and continue to improve drought resistant wheat, an essential crop for the region. Seed banks like this are able to improve and adapt crops to emerging agricultural challenges and the vault provides a backup copy in case a seed bank’s supply is threatened.

Who Runs the Vault?

The facility is joint-operated by the Norwegian government and the Global Crop Diversity Trust. Any individual, group or country, who deposits seeds must do so under nationally and internationally agreed-upon laws. The vaults depositors, typically individual countries or seed banks, maintain full access and control of their seeds while in the vault. The Nordic Gene Bank maintains public records for all of the seeds deposited in the vault to help promote information sharing between depositors.

While the vault serves an important purpose–holding a backup supply for crucial crops around the world–it has other benefits. Namely, in the current era of mono-cropping, many gene varieties have been lost as a few robust strands of crops such as corn or rice are grown in greater and greater amounts. While these versions may offer higher yields or are generally more robust due to little genetic variation, a single blight could wipe them all out at once. The vault also serves the role of preserving less commercially viable types of seeds which keep the gene pool more diverse and, therefore, resilient. Preserving this biodiversity may also be crucial to meeting growing food needs, as researchers will be able to develop more productive strains of plants to increase their yield.

While research and genetic diversity are valuable pursuits, the vault was ultimately designed to protect the world’s crop supply in the event of a disaster. Arguably the greatest long-term threat is global climate change, which may change life on earth as we know it and significantly alter global agriculture. The video below details the uses of the vault:

Due to the Svalbard Vault’s nickname, the doomsday vault, it is generally considered a source of last resort. While the first withdrawal by ICARDA in the Middle East does not indicate the end of the world, a vault is able to support regional seed banks in their efforts to develop and improve crops. In fact, the recent withdrawal proves the facility is performing the way it should. Not only is the vault designed to safeguard seed diversity, it was also designed to serve as a depository for scientists who may call upon its stock in order to improve their current varieties.

The notion of climate change has been overwhelmingly accepted by the scientific community. While the international community has not yet been able to address the impending challenges, scientists may be racing to build up the vault’s supply as challenges mount. Not only are current strands of crops under threat from disaster, they also face risk from farmers’ own growing habits. While a small number of crops have become essential to global agriculture, climate change may increase the need for diversity to meet ecological change.

Rarely do North Korea and the United States agree on any initiatives and even more rarely do these two governments receive support from large non-profits, such as the Gates’ foundation. The Svalbard Seed Vault is a notable exception. While people may still argue over the best way to preserve biodiversity this endeavor marks an important point of progress in securing that goal.

The Newyorker: Sowing for Apocalypse

Wired: That Arctic Seed Vault isn’t Just There for Doomsday

Washington Post: The ‘Doomsday’ Seed Vault That Preserves the Food of the Past and Ensures its Future

The Guardian: The Doomsday Vault: The Seeds That Could Save a Post-Apocalyptic World

Michael Sliwinski
Michael Sliwinski (@MoneyMike4289) is a 2011 graduate of Ohio University in Athens with a Bachelor’s in History, as well as a 2014 graduate of the University of Georgia with a Master’s in International Policy. In his free time he enjoys writing, reading, and outdoor activites, particularly basketball. Contact Michael at staff@LawStreetMedia.com.
Share:
Related ItemsGlobal CooperationInternational RelationsSeed VaultSyrian Civil War