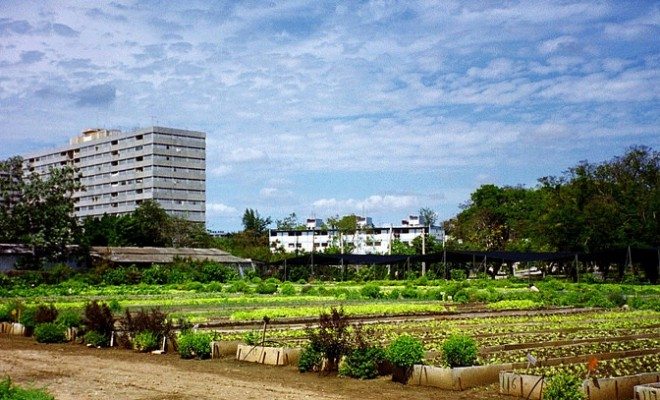 The Promise of Urban Agriculture

In some ways, the more urbanized an area is the greater potential it has to be sustainable. Public transport becomes readily available, reducing the need for individually owned cars, and the closer together things are the easier it is to walk from place to place. However, while grocery stores and restaurants may be close by to customers, more often than not the food that sustains them comes from outside of the community, sometimes from hundreds of miles away.

When calculating the carbon footprint of a suburb or a city, it’s important to keep in mind that the distance food delivery trucks travel to keep an area well-fed can be a serious obstacle to any community’s sustainability. This problem gave birth to the locavore movement, which has been steadily growing in popularity throughout America. Locavores attempt to get their food as close as possible to where they live, which has the benefit of reducing CO2 emissions, supporting local farmers, and ensuring that one’s food hasn’t been treated with pesticides or raised with hormones.

One result of locavorism is the urban agriculture movement, which strives to utilize local property for small scale farming. Urban agriculture can manifest in a variety of ways in both suburban and city environments but it has been vehemently opposed in many areas throughout the country. However, the movement has serious potential to help increase sustainability in communities around the country.

The modern American suburban home typically has a small front lawn, which is kept mowed and watered for aesthetic purposes. However, added up throughout the nation, these lawns make up a huge amount of underutilized, farmable land. Homeowners in states all over the country are starting to realize the potential of this land, and are growing edible gardens in their front yards. The average suburban property won’t generate a yield that’ll provide for an entire family’s calorie requirements, however, they can dramatically contribute to a household’s vegetable needs. This has the environmental benefit of reducing a family’s dependence on produce that comes through long supply chains and also encourages a healthy diet.

Edible gardens actually require about half as much water to maintain as a traditional lawn and prevent the exhaust fumes from lawnmowers, which are exceptionally polluting machines due to their unregulated and highly hazardous fuel contents. Furthermore, if you cultivate your edible garden without pesticides and fertilizers (which would generally be unnecessary in small scale agriculture) then you prevent a host of chemicals from being picked up by rainwater and delivered into local water sources. Depending on the amount of space in your lawn, it may also be possible to raise smaller livestock animals, such as chickens and rabbits, which generally don’t require very much space to take care of. If an entire community bands together and adopts this model of living, it can dramatically reduce the area’s carbon footprint, conserve water, and strengthen community bonds.

In an urban setting, there’s no such potential for lawns to be directly repurposed into gardens, so city dwellers have to pursue more creative pathways. While the average person who lives in an apartment doesn’t own that property, anyone with a window facing steady sunlight can grow small scale produce hanging out of their windows. This is the premise behind the idea of vertical gardening, which seeks to make use of all the surface area we have built vertically as a source of nutrition and as a sink for carbon.

Theoretically, high-rise apartment buildings have created an abundance of additional land by building walls that take up more surface area than the original width and length of the plot of land they were built upon. This increases the potential for food development, although produce that requires high sun exposure can only be grown near windows and may require heavy watering. However, it’s just as possible to grow produce on vertically stacked beds in any apartment and in any house, though it may require additional light to grow healthily if plants can’t be exposed to a natural light source. Growing mushrooms may also be a good choice for indoor gardening because they require little to no light and provide strong sources of protein.

Rooftop gardens are another way to produce a significant agricultural yield since the area of a building’s roof is generally the same as the land taken away on the ground by its construction. While you can easily cover a roof with potted plants, it’s also possible to actually build a garden directly on a rooftop, equipped with soil layers, and drainage and irrigation systems. One of the major obstacles to these “intensive” rooftop gardens is that architecturally, there are limits to what a roof can hold. Soil, especially when saturated with water, can be extremely heavy and can be a serious burden on what a building can hold. When designing a rooftop garden it’s important to take into account the exact weight that your building can handle and not to exceed that. Other concerns include the potential safety risks involved in rooftop gardening.

The top of urban buildings are almost always built of impervious surfaces that cause rainwater to rapidly pour off, which can also lead to flooding and may carry contaminants into water sources. When rainwater encounters vegetation, it dramatically decreases the speed of runoff and risk of flooding, and may even filter water as it moves downward. Rooftop gardens also have the benefit of blocking roofs from sun exposure. Black asphalt absorbs heat, creating the Urban Heat Island Effect, which causes cities to reach uncomfortably warm temperatures, especially in the top floors of apartments. The canopy offered by rooftop gardens has a cooling effect that can both increase comfort and decrease air conditioning expenses.

Empty lots also provide ample space with which to grow gardens and to aesthetically improve an area. Empty lots have the unique feature of being non-exclusive gardens, unlike window or rooftop agriculture. A local community can cooperatively participate in a lot garden, which can strengthen community bonds as well as provide local produce.

While the concept of edible gardens may sound strange and novel, it’s not a completely new concept. In World War II the lack of labor and transportation difficulties severely cut off food supply chains, so the government proposed the idea of “Victory Gardens.” Victory gardens encouraged citizens to raise as much produce and livestock as they could as part of their patriotic duty as Americans. Backyards and empty lots were converted into small farms and even city rooftops were covered with whatever could be grown on them. A huge number of Americans banded together and an estimated 20 million victory gardens were created. Altogether these gardens produced between 9 to 10 million tons of produce, equivalent to the amount of commercially produced vegetables at the time. This impressive yield serves as a powerful example of the impact the same practices could have today. So what’s stopping America from achieving the same results again?

Many states have laws against owning livestock such as chickens, goats, and beehives on private property. Suburban communities across America also have made objections to edible gardens, claiming that they hurt the aesthetics of a neighborhood. Farmland can be considered unclean and a symbol of lower class status. Many believe that suburban gardening will decrease the property value of surrounding houses. States like Iowa, Florida, and Louisiana have written laws banning backyard gardening and require lawns to be regularly maintained; countless city and town governments have made similar mandates.

Apartment building owners may have objections to vertical gardening for similar aesthetic reasons. Rooftop gardens are one of the most significant ways to impact urban agriculture, but their existence also largely depends on the wishes of the building owners. Rooftop gardens are highly complex and require large amounts of maintenance. Many people may not want to invest the time and resources into actualizing their existence. There’s also an ongoing debate on whether rooftop space would be better utilized with solar panels since the tops of tall buildings provide some of the best access to solar energy. As for empty lot gardens, it’s often the case that just because an area is abandoned, that doesn’t mean it’s publicly accessible. Many open city lots may be boarded or fenced up to prevent people from interfering with the area. In some places this has led to movement of “guerilla gardening,” that is, throwing projectiles made of seeds wrapped in clay over fences. These vegetable “bombs” protect the seed long enough for it to sprout and draw nutrients, encouraging vegetation growth in otherwise inaccessible areas.

Beyond community opposition and technical difficulties, it’s also just true that only a small percentage of people are interested in urban agriculture. America is a very different place now than it was during World War II and we have nowhere near the food insecurity we previously did. The ethos of patriotism that inspired American citizens to grow food for the sake of the country’s stability is no longer in effect, and many people simply don’t see the benefits of urban agriculture. Ideally, Americans could regain the desire to grow their own food now in the interest of environmentalism. However, as large as our grocery stores are fully stocked, it is fairly unlikely that the urban agriculture movement will truly grow huge.

About News: Origin of the Word Locavore

Chicago Department of Environment: A Guide to Rooftop Gardening

EarthEasy: Lawn Care Chemicals: How Toxic Are They?

Living History: Farming in the 1940s

Resilience: Why Our Food is so Dependent on Oil

TakePart: Leave Your Lawn for Life on the Urban Farm