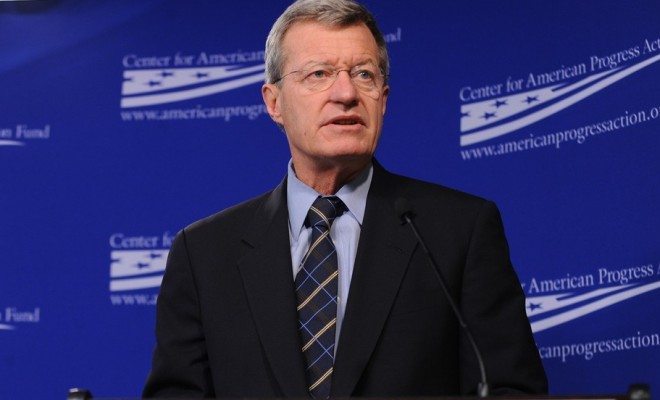 Image courtesy of [Center for American Progress via Flickr]

On December 18, 2013, Senate Finance Committee Chairman Max Baucus unveiled a discussion draft for an energy tax reform plan intended to make progress in the federal government’s current system of corporate tax incentives for the production of clean energy. The old system was criticized as being too complicated and too decentralized. Read on to learn about Baucus’ energy plan, the arguments in favor of it, and the arguments against it.

What was Baucus’ plan?

There are forty separate tax incentives offered to corporations for a variety of forms of energy including fossil fuels, wind, solar, and nuclear power; however, many of these are short-term incentives set to expire every two years or so until they are re-authorized by Congress, often leaving companies unsure of which tax incentives would still be in effect in the future. These incentives are also often specific in a way that does not provide for new and emerging technologies that may contribute to reducing emissions.

Senator Baucus’ plan aims to make energy tax incentives “more predictable, rational, and tech-neutral” by consolidating some of these incentives and eliminating others to form two broader and simpler tax incentives, one focused on clean production of electricity and one focused on clean production of transportation fuel. These incentives are granted after a particular plant is using a method that produces emissions intensity 25 percent cleaner than average energy production methods (“emissions intensity” is measured as the amount of emissions released per amount of energy produced, and is used to compare the environmental effect of different methods of energy production).

Baucus’ plan also calls for using the federal money saved through this tax reform to lower the corporate tax rate, which currently stands at 35 percent. Baucus, however, was confirmed in January as the next US Ambassador to China, and though leadership of the Senate Finance Commission will transfer to Senator Ron Wyden, who has worked closely with Baucus on this reform plan, many expect the plan to become stalled as its leader moves overseas. Despite this uncertain future, Baucus’ reform plan is seen as an indicator of impending reform to the current energy tax system in the United States.

What is the argument for Baucus’ plan?

Supporters of the reform say Baucus’ plan is an effective way to simplify the tax incentive structure while supporting clean energy. Companies would not have to waiting on their toes to see whether the particular incentives that apply to them would be renewed, and knowing that these incentives will have more longevity would promote more investment into clean energy production technology projects in the future. Most importantly, this reform plan is tech-neutral, meaning that it does not favor certain technologies over others and in fact does not specify any technologies in its incentives.

Supporters argue that this aspect of the plan will benefit newer and cleaner technologies that may not necessarily fit into the rigid outlines of our current tax incentives, thus paving the way for further innovation and investment into energy-producing technology. Additionally, many of the incentives that are to be eliminated and not included in the broader transportation fuel incentive are tax breaks that benefit Big Oil, a move hailed by many supporters who do not see the point of offering tax breaks to companies in an industry that has shown record profits year after year [cite]. Lastly, with the federal revenue gained from simplifying the tax incentive structure and removing breaks for big oil companies, Senator Baucus’ plan intends to lower corporate tax rates, which supporters hope will provide impetus for further economic growth.

What is the argument against Baucus’ plan?

Others are strongly opposed to this reform plan due to its emphasis only on energy producers (companies that use coal, fossil fuels, wind, solar and other methods to produce energy) and not energy users (all other private citizens and companies that use electricity, gasoline, etc.), and because the emissions reduction quotas of the incentives are, as one critic put it, “unambitious”, and would have little effect on improving the environment.

The two main tax incentives of Baucus’ plan target producers of electricity and transportation fuel, with no mention of companies that use energy in a cleaner way. This means that companies that make their buildings more energy efficient, companies that manufacture environmentally-friendly appliances and cars, and the individuals who use these greener manufactured goods would no longer receive the tax incentives they currently receive. Many opponents see this as being counter-productive in the struggle to promote cleaner energy technologies.

There has also been a backlash from the oil and natural gas industry, as well as from areas such as Montana and North Dakota who have a fledgling oil industry, arguing that by favoring carbon-free technologies the plan would be stifling job opportunities and economic growth brought about by the oil industry. Lastly, some opponents of the plan argue that the reduction quotas are too low. One critic points out that a 25% reduction in emissions “intensity”, which is the wording used in the discussion draft, is vastly different from a concrete measurement of emissions, and depending upon economic growth and the relative amount of energy these companies are producing, companies could meet this quota without any serious reduction in emissions. On a broader scale, some oppose tax incentives for alternative energy production altogether, arguing that global warming is, as indicated by its name, a global phenomenon, and that any reduction in emissions in the US is offset by emissions due to economic growth in developing countries, where environmental legislation is often more lax.

It’s clear that something needs to be done to fix the very confusing and red-tape-littered energy tax process. While there are certainly tangible benefits to Baucus’ plan, opponents worry that it would do more harm than good.

BillingsGazette: Baucus’ Tax Reform Must Be Fair To Energy Industry

Joseph Palmisano
Joseph Palmisano is a graduate of The College of New Jersey with a degree in History and Education. He has a background in historical preservation, public education, freelance writing, and business. While currently employed as an insurance underwriter, he maintains an interest in environmental and educational reform. Contact Joseph at staff@LawStreetMedia.com.
Share:
Related ItemsClean EnergyEnergyEnergy ProductionEnergy Tax ReformGovernment SubsidiesGreen EnergyMax BaucusNatural GasNuclear PowerOil IndustrySolar PowerTax IncentivesWind Power