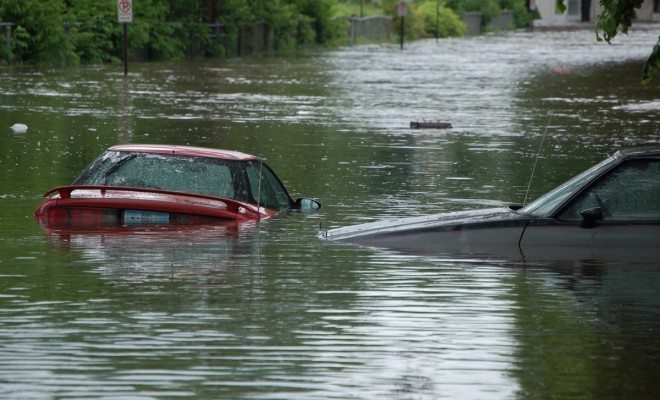 Flooding in the Midwest: The Challenges of Disaster Relief

Rivers from Texas to Illinois have flooded as a severe storm system moves through the Midwest. There have been numerous flood related deaths in Missouri and Illinois; many of these deaths were related to drivers being trapped in their cars as the flood waters rose. The Midwest is currently recuperating during a brief reprieve from rain but Southern states have begun preparations for massive flooding. Thousands of people have been displaced by the evacuation process, seeking shelter in hotels or with family members while their homes are claimed by the rising water. The Midwest is usually hit by flooding hardest in the spring and summer, and was expecting snow during December rather than rain. Whereas summer floods are easily contained and property damage is often minimal, the winter flooding has been catastrophic. Read on for a look inside the disaster relief process that has swung into action over the past few weeks.

Earlier in December, the Federal Emergency Management Agency (FEMA) organized a specialized El Nino task force to tackle the oncoming weather phenomenon. FEMA operates under the jurisdiction of the Department of Homeland Security, coordinating efforts between regional, state and federal relief teams. According to the National Oceanic and Atmospheric Administration,

An El Nino is a weather phenomenon in which warmer tropical Pacific Ocean waters cause changes to the global atmospheric circulation, resulting in a wide range of changes to global weather. Over North America, the Pacific jet stream (a river of air that flows west to east) often expands eastward and shifts southward during El Nino, which makes precipitation more likely to occur across the southern tier of the United States.

El Nino is also responsible for the nationwide temperature spikes that have made this winter season relatively mild for most of the Eastern seaboard. The current El Nino moving through the Midwest is the strongest since 1998. El Nino’s impacts do not only impact the Western hemisphere. According to BBC News,

Aid agencies like Oxfam are worried that the impacts of the continuing El Nino in 2016 will add to existing stresses such as the wars in Syria, South Sudan and Yemen. They say that food shortages are likely to peak in Southern Africa in February with Malawi estimating that almost three million people will require humanitarian assistance before March. Drought and erratic rains have affected two million people across Guatemala, Honduras, El Salvador and Nicaragua. More floods are expected in Central America in January.

Weather services provide FEMA with consistent updates on El Nino weather patterns, information which FEMA then uses to design response plans for individual states and regions. FEMA coordinates with regional and federal officials to manage disaster response and evacuation. After Governor Jay Nixon declared a state of emergency and deployed the National Guard in Missouri, he spoke with President Obama to discuss federal aid and intervention. According to a recent NASA report, the El Nino pattern is not waning and will continue to hit the country with significant force in the coming week. NASA satellites have tracked sea surface heights and temperatures over the past several weeks and will continue to work with disaster relief teams throughout the duration of the floods.

The History of FEMA

FEMA was founded in 1979, created via an executive order by President Carter. The federal government had completed informal disaster relief for domestic weather emergencies since the 1930s but the establishment of FEMA merged multiple agencies and marked an official commitment to aiding communities. In 2003, FEMA became part of the Department of Homeland Security, largely as a result of 9/11. According to FEMA’s website,

The agency coordinated its activities with the newly formed Office of Homeland Security, and FEMA’s Office of National Preparedness was given responsibility for helping to ensure that the nation’s first responders were trained and equipped to deal with weapons of mass destruction. Within months, the terrorist attacks of Sept.11th focused the agency on issues of national preparedness and homeland security, and tested the agency in unprecedented ways. Billions of dollars of new funding were directed to FEMA to help communities face the threat of terrorism. Just a few years past its 20th anniversary, FEMA was actively directing its ‘all-hazards’ approach to disasters toward homeland security issues.

But in the wake of Hurricane Katrina, FEMA was criticized for a number of reasons. Critics claimed that the evacuation process was not coordinated well enough and the number of supplies set aside for evacuees was not sufficient. Attempts to ensure that the process was running smoothly were in some cases interpreted as massive mistakes that slowed down the relief process on purpose. FEMA was considered to be uncoordinated on the ground, and images of New Orleans’ citizens baking in the heat of the SuperDome became synonymous with an ineffective FEMA response.

Hurricane Katrina was FEMA’s first massive challenge after becoming part of the Department of Homeland Security and was considered an embarrassment both for the agency and the Bush administration as a whole. FEMA director Michael Brown was considered by some to be insufficiently experienced in disaster management, although he claims that he did not have access to a great deal of information on the ground until days after evacuation began. The difficulties of Katrina evacuation and aid were not solely FEMA’s but the agency became the poster child for bureaucratic inefficiency.

The Difficulties of the Current Evacuation

As evacuation orders went into effect across the region, escaping the oncoming surge was made difficult because of compromised transportation routes. Interstates flooded, forcing travelers onto local roads that quickly became jammed. Trucks transporting commodities along set driving routes got stuck on the flooded roads and drivers were forced to abandon their cargo as the waters rise. Police forces and volunteers have been adding sandbags to major roads in preparation for flooding but the effects of these preventative measures have been minimal as multiple levees have broken across the region. Evacuees are forced to abandon their cars on the road, often after waiting on the roofs of their vehicles for hours for rescue teams. The majority of businesses and buildings have shut down during the floods, essentially turning several counties in Missouri and Illinois into ghost towns. People who tried to stay in their homes to wait out the flood found themselves fleeing to higher stories to escape more than water–untreated sewage filled the water of towns in Missouri and thousands of people were left without access to drinking water. In agricultural areas, pigs, horses and other livestock are often casualties of massive flooding. U.S. News reported yesterday that:

The U.S. Army Corps of Engineers says it is not planning to open a southeastern Missouri floodway in response to the swollen Mississippi River – at least not yet.

Opening floodways to divert the flow of water is one solution to local flooding but it will likely not be significant enough to impact the whole state. When flooding occurs this heavily over such a wide stretch of land, there is no easy solution. Even if water can be diverted out of certain communities, it would be held by levees that may be incapable of successfully containing the rivers, endangering other towns further downstream. The activation of the National Guard should provide extra manpower and resources for evacuation efforts but as long as the El Nino weather pattern persists, the flooding will continue in full force. Without an end to the incessant rain and flooding, conditions will likely only worsen in the Midwest and South.

The flooding in the Midwest presents a daunting challenge for rescue teams across the country, but if FEMA has learned from Hurricane Katrina, it will tackle it efficiently and quickly. Evacuation is a challenging process that requires dozens of teams to coordinate transportation and rescue efforts during any time of year, but winter weather conditions make the task Herculean. Flooding is only expected to increase and expand to the South in the coming days. As FEMA, the National Guard and various regional officials coordinate their efforts, thousands of residents await aid as their homes sink deeper and deeper under the flooded rivers. If handled correctly, these floods may redeem FEMA’s public image and create a functional template for future evacuation scenarios. If handled poorly, these floods may cement FEMA’s reputation as ineffective and disorganized in the face of tragedy.

FEMA: About the Agency: A New Mission: Homeland Security

US News: The Latest: Flooding Forces Closure of 3 Historic Sites in Illinois Because of Unsafe Roads

Jillian Sequeira
Jillian Sequeira was a member of the College of William and Mary Class of 2016, with a double major in Government and Italian. When she’s not blogging, she’s photographing graffiti around the world and worshiping at the altar of Elon Musk and all things Tesla. Contact Jillian at Staff@LawStreetMedia.com
Share:
Related ItemsDangerDepartment of Homeland SecurityFEMAHurricane KatrinaKatrinaMidwestWeather