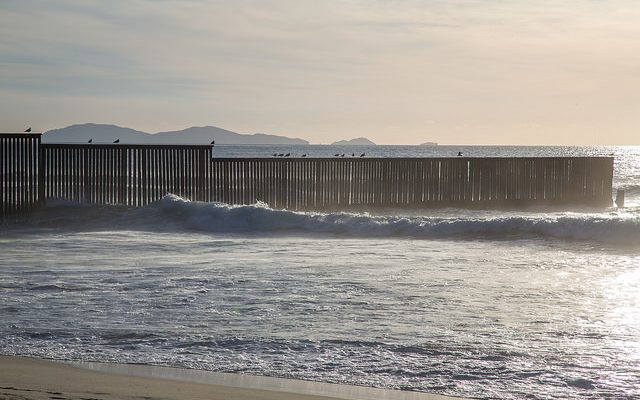 The Department of Homeland Security waived more than three dozen environmental laws and regulations Wednesday to speed up the first phase of construction of border wall projects near San Diego.

The projects will be constructed along an approximately 15-mile segment of land that starts at the Pacific Ocean and extends eastward toward a point called Border Monument 251, according to a statement from the DHS. The waiver follows one of President Donald Trump’s January executive orders, which called for greater security along the U.S.-Mexico border.

DHS has been coordinating and consulting–and intends to continue doing so–with other federal and state resource agencies to ensure impacts to the environment, wildlife, and cultural and historic artifacts are analyzed and minimized, to the extent possible.

However, environmental advocates and border wall opponents weren’t convinced. The Center for Biological Diversity, which sued the DHS in June to obtain documents on Trump’s border wall prototypes, published a statement condemning the waiver and the wall. Brian Segee, and attorney for the center, criticized Trump’s planned wall for being harmful to the environment and the people who live near the border.

“Trump wants to scare people into letting him ignore the law and endanger wildlife and people,” Segee said in the statement. “Trump’s wall is a divisive symbol of fear and hatred, and it does real harm to the landscape and communities.”

In another critique of the decision, American Oversight Executive Director Austin Evers cautioned against impulsively expediting the border wall.

“Today’s announcement by DHS is a disturbing sign that President Trump will barrel ahead with building a border wall no matter the cost to taxpayers or effect on our environment,” he said. “Given the widespread skepticism towards the effectiveness of the border wall by leaders in both parties–including the new White House Chief of Staff–effective safeguards are more important than ever to prevent President Trump from spending tens of billions of dollars and radically transforming our Southwestern border based solely upon his whims and impulses.”

Environmentalists fear that Trump’s border wall would negatively impact the surrounding environment through actions such as impeding animal migration and increasing floods in the desert. Segee pointed out that the construction wouldn’t be limited to just the wall, but would include roads, lighting, and other infrastructure that would accompany it.

In a May study, the Center for Biological Diversity found that the wall and related infrastructure would potentially affect 93 threatened, endangered, and candidate species. But the full impact of such large-scale construction projects cannot be known unless an environmental impact assessment is performed, a procedural step that DHS does not appear to see as a necessity.

Marcus Dieterle
Marcus is an editorial intern at Law Street. He is a rising senior at Towson University where he is double majoring in mass communication (with a concentration in journalism and new media) and political science. When he isn’t in the newsroom, you can probably find him reading on the train, practicing his Portuguese, or eating too much pasta. Contact Marcus at Staff@LawStreetMedia.com.
Share:
Related ItemsAmerican OversightBorder WallCenter for Biological DiversityDepartment of Homeland SecurityDonald TrumpEnvironmental RegulationMexicoSan Diego