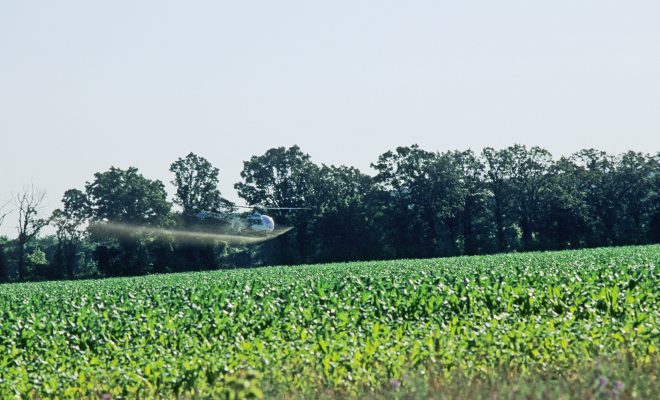 The use of herbicides and pesticides on crops has become the default method for conventional agriculture. Despite growing public concerns over the use of chemicals on our food supply, these products continue to saturate the market and are utilized at a steady rate. While researchers continue to evaluate the long term effects these potent chemicals have on humans and the environment, another chemical has been added to farmers’ ever-growing arsenal. The Environmental Protection Agency has proposed to expand the use of Enlist Duo, an effective weed killer, from 15 to 34 states. But should we be worried about the toxicity of this popular herbicide?

Originally, in 2014, the Environmental Protection Agency (EPA) approved the use of a brand new herbicide, Enlist Duo, for genetically modified corn and soybean crops. Enlist Duo is a chemical manufactured by Dow AgroSciences, which is a subsidiary of the Dow Chemical Company–one of the largest chemical companies in the world.

After the initial approval of Enlist Duo, the EPA asked a court to give it another opportunity to re-review the approval of the chemical. In a highly unusual move, the agency asked for a withdrawal of its own approval of the product. According to the EPA, it had reviewed the patent submitted by Dow to the U.S. Patent and Trademark Office and discovered a significant discrepancy. Particularly, the company claimed the product’s combination of two chemicals, 2,4-D and glyphosate, amplified each other and created a far more potent herbicide.

The EPA was concerned that Dow had not disclosed this synergy during the agency’s initial review of the product’s environmental and health risks. The agency scientists wanted to decide if there needed to be a larger no-spray zone at the edge of farm fields. Studies where rats, rabbits, birds, and fish were given one large dose of Enlist Duo showed no increased toxicity in the animals after two weeks. However, the agency never requested that Dow chronically dose rats with a combination of 2,4-D and glyphosate. Therefore, long-term health effects of the chemical mixture are unclear.

Several environmental groups, led by the National Resources Defense Council, brought a lawsuit against the EPA over Enlist Duo in 2014. The plaintiffs stated that the EPA had violated the law because it had not adequately considered the effect that Enlist Duo would have on public health and the environment, particularly the monarch butterfly population.

Dow, of course, opposed the allegations as well as the EPA’s request to vacate the original approval, suggesting instead that the court remand the registration back to the EPA for further evaluation. The company voluntarily agreed to stop sales of the product while the EPA reevaluated it. Additionally, Dow stated that it had abandoned the synergy patent in question when a thorough review revealed that the particular synergies were not in the final formulation of Enlist Duo. However, advocacy groups noted in a legal filing that Dow abandoned the patent a year after the EPA approved Enlist Duo, and only after the EPA requested synergy data from Dow.

Eventually, the 9th U.S. Circuit Court of Appeals upheld the EPA’s original approval. The three-sentence judicial order did not elaborate on any reasoning for the decision. This meant that Dow could continue to market the chemical to farmers for sale, even while the EPA was re-reviewing its initial approval. The company reneged its voluntary offer to cease sales, claiming the offer was never agreed to; thus, the chemical remained on the market.

Last year, the Chicago Tribune released an investigative article that revealed that the EPA had changed its interpretation of a key study of 2,4-D. Essentially, the EPA changed the no-adverse-effect level of 2,4-D from 7mg/kg to 21mg/kg in rats, paving the way for the agency to reduce consumer protections. EPA scientists dropped a tenfold child-safety factor after conducting a study that concluded there was no longer evidence of a special susceptibility of children to the chemical compound. Regulators set the allowable daily intake of 2,4-D for people at 0.21mg/kg. Thus, the significant change allowed for 41 times more 2,4-D to enter the American diet than previously allowed, an astounding change.

2,4-D has been around since the 1940’s and was one of the ingredients in Agent Orange, a highly toxic and controversial herbicide used by the U.S. military as part of its herbicidal warfare program during the Vietnam War. The EPA has discounted safety data showing that 2,4-D has been linked to cancer and other health problems, such as hypothyroidism and Parkinson’s disease. In order to make the change in allowable daily intake, the EPA has tossed aside research produced by Dow’s own scientists regarding kidney problems and kidney lesions caused by 2,4-D.

The overuse of chemicals, like Roundup, year after year has resulted in an increase in weed resistance, or “superweeds,” leaving companies scrambling to find more effective products to market to farmers. As a result, agriculture is now turning back toward older, more toxic products, like 2,4-D. But if you’re concerned about exposure to more toxic weedkillers, disclosures in Dow’s patent applications are very telling. The company’s application for genetically modified corn and soybeans foreshadows a day when weeds develop a resistance to both glyphosate and 2,4-D. The records show that Dow eventually envisions a day when the company must add even more traits to corn and soybeans so that the crops can survive being sprayed with up to 17 different chemicals.

Concerns Regarding Enlist Duo Use

One of the largest concerns surrounding Enlist Duo use is that Dow may have lied on its patent application. A Dow spokesperson adamantly denies that contention, stating that the EPA and the U.S. Patent and Trademark Office have “different standards of data requirements” and the company’s claims that the two chemicals amplified each other were “based on a limited dataset.”

After the re-review and approval of Enlist Duo this year, the EPA has also announced a proposal to expand where the new herbicide can be used. Currently it is used to suppress weeds on corn and soybean crops. Now, the EPA is considering whether to allow its use on cotton crops. This expansion means that the new herbicide may be approved for use in 34 states, as opposed to the original 15 states. Moreover, the World Health Organization has issued findings that glyphosate and 2,4-D are probable and possible carcinogens, respectively, in addition to the other health concerns related to 2,4-D.

In addition to human health hazards, environmentalist groups are concerned about Enlist Duo’s effect on the monarch butterfly population. Monarch butterflies have struggled in recent years, with populations in a steep decline due to the overuse of glyphosate products, like Roundup. Enlist Duo’s chemicals specifically obliterate milkweed, the plant that monarchs need to survive. A 1999 survey found that milkweed was in at least 50 percent of Iowa corn and soybean crops; by 2009, milkweed was only found in 8 percent of those same fields.

Additionally, estimations of the monarch butterfly populations have remained low, despite an initial bump in numbers, after a winter storm killed millions before they ever left the Mexican monarch reserve. Storms devastated 133 acres of trees west of Mexico City and affected over 7 percent of monarchs, with about 6.2 million butterflies frozen or killed.

The EPA’s failure to consider the effects of Enlist Duo on monarch butterflies has environmentalists extremely concerned for the ailing population, teetering on the brink of extinction.

The market for Enlist Duo is potentially massive, with 94 percent of soybeans and 89 percent of corn planted in the U.S. genetically modified to survive herbicides, primarily the glyphosate in Roundup. However, the EPA’s suggestion to more than double the number of states permitted to use Enlist Duo has outraged environmentalists and advocates across the country. Many people believe that reviving a World War II-era chemical to combat superweeds isn’t the best solution for the sustainability of industrial agriculture–especially when it could have a negative effect on the monarch butterfly population. The EPA contends that the chemical is “perfectly safe,” and poses no long-term health risks to humans.

The EPA is accepting public comments through December 1, 2016 regarding the agency’s proposal to expand the use and registration for Enlist Duo.

Chicago Tribune: Weedkiller’s Revival is Cause for Concern

CBS DFW: EPA May Increase Use Of Weed Killer Despite Concerns

Nicole Zub
Nicole is a third-year law student at the University of Kentucky College of Law. She graduated in 2011 from Northeastern University with Bachelor’s in Environmental Science. When she isn’t imbibing copious amounts of caffeine, you can find her with her nose in a book or experimenting in the kitchen. Contact Nicole at Staff@LawStreetMedia.com.
Share:
Related ItemsEnlist DuoEPAGMOGMO cropsHerbicidesNRDCpesticides