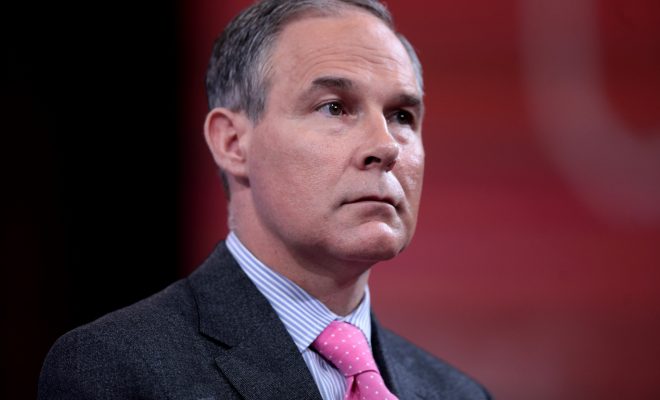 The case highlighted the split between the EPA’s growing cadre of opponents, mostly made up of environmental groups, and its allies, mostly made up of industry groups. It specifically pitted Pruitt and the American Petroleum Institute against six environmental groups. The plaintiffs, which include the Environmental Defense Fund and the Sierra Club, brought their case to the U.S. Court of Appeals for the District of Columbia in June.

The events that led to the court’s 2-1 decision began in June 2016, when the EPA announced a rule that would require oil and gas companies to, among other things, monitor and reduce methane gas emissions. The rule was set to take effect in August 2016; companies would be required to conduct an “initial monitoring survey” of their methane emissions by June 2017.

In April, soon after Pruitt was anointed head of the EPA, he announced a 90-day delay of the methane rule. And in June, Pruitt proposed an extension of the stay for two years. Monday’s ruling struck down Pruitt’s 90-day delay; a separate hearing will be held on the two year extension.

The EPA “lacked authority under the Clean Air Act to stay the rule, and we therefore grant petitioners’ motion to vacate the stay,” Judges David Tatel and Robert Wilkins wrote in the majority opinion. Pruitt’s 90-day stay, the judges said, “is essentially an order delaying the rule’s effective date, and this court has held that such orders are tantamount to amending or revoking a rule.”

In a recent interview with the Washington Post, Pruitt defended his stay, saying that it did not necessarily portend a complete reversal of the rule. He argued: “Just because you provide a time for implementation or compliance that’s longer doesn’t mean that you’re going to necessarily reverse or redirect the rule.”

In her dissenting opinion, Judge Janice Rogers Brown largely echoed Pruitt’s point, saying, “The Court presumes a certain outcome from EPA’s reconsideration, one that a stay alone gives us no basis to presume.”

Methane is a greenhouse gas that is typically emitted during the fracking process for natural gas. According to a fact sheet released by the EPA last year, methane is the second most prevalent greenhouse gas in the U.S., behind carbon dioxide. About one-third of methane emissions come from natural gas, the fact sheet says, adding that the Obama Administration’s methane regulation would have reduced 510,000 tons of methane gas by 2025.

The court’s ruling was a victory for environmental groups, many of which have found themselves in staunch opposition to the governmental body that is supposed to share their goals. David Doniger, director of the Natural Resource Defense Council’s climate and clean air program, said in a statement:

“This ruling declares EPA’s action illegal — and slams the brakes on Trump Administration’s brazen efforts to put the interests of corporate polluters ahead of protecting the public and the environment.”

Alec Siegel
Alec Siegel is a staff writer at Law Street Media. When he’s not working at Law Street he’s either cooking a mediocre tofu dish or enjoying a run in the woods. His passions include: gooey chocolate chips, black coffee, mountains, the Animal Kingdom in general, and John Lennon. Baklava is his achilles heel. Contact Alec at ASiegel@LawStreetMedia.com.
Share:
Related ItemsClimateEPAGreenhouse GasesMethaneRegulationsScott Pruitt