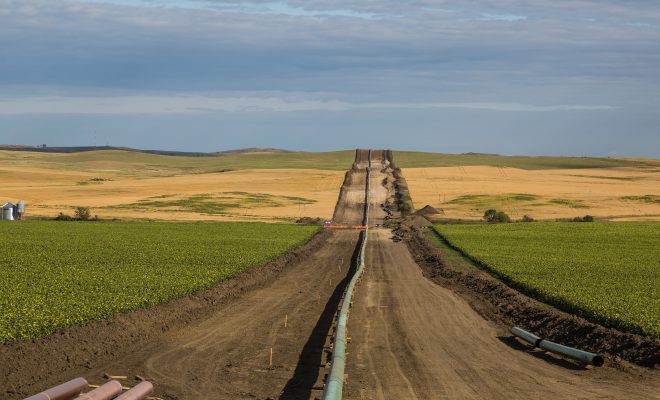 For many Americans, “I stand with Standing Rock” signs and chants have become all too familiar. Over the past year, the Dakota Access Pipeline has remained an extremely controversial project, putting water rights and tribal lands front and center in oversaturated news cycles. Former President Obama had halted construction of the pipeline until more environmental impacts could be considered, but the new Trump Administration has once again given the contentious project the green light. The Standing Rock Sioux tribe has vowed to shut down the project by any means necessary, indicating an uphill battle ahead for both sides of the project.

Priced at $3.7 billion, the Dakota Access Pipeline is a 1,172-mile-long underground oil pipeline project designed to transport Bakken shale oil. The pipeline is poised to transport 470,000 barrels of crude oil a day across four states, from North Dakota through South Dakota and Iowa and into Illinois. According to those in favor of the project, it is supposed to be a more cost-effective method of transporting oil than doing so by truck or train; almost 70 percent of Bakken oil is transported by train. Proponents also contend that the pipeline will help the U.S. gain energy independence.

The pipeline is extremely controversial due to its potential impact on the environment. Numerous tribes have expressed opposition to the project including the Meskwaki, Standing Rock Sioux, and Cheyenne River Sioux tribes. Initially, the pipeline route was intended to cross the Missouri River just north of Bismarck, North Dakota. It was later rerouted closer to tribal lands, a decision criticized by many as environmental racism.

Treaty of Traverse des Sioux and Treaty of Fort Laramie

Opponents have argued that the pipeline would be in direct violation of the Sioux’s national sovereignty, as delegated in the signings of two treaties–the 1851 Treaty of Traverse des Sioux and the 1868 Treaty of Fort Laramie.

In 1851, the U.S. government and the Sioux in Minnesota signed the Treaty of Traverse des Sioux, which ceded large portions of territory to the federal government. In exchange for annuities in the form of cash and goods, the Sioux agreed under the treaty to move to land along the Minnesota River. White settlers were interested in obtaining control of the land for agriculture and also wanted the Sioux to convert from their nomadic lifestyle to European-American settled farming. However, violations of the treaty in the form of inadequate payments from the U.S., food shortages, and subsequent famines lead to a breaking point in the form of the Dakota War of 1862.

Another influential agreement was the Treaty of Fort Laramie, known as the Sioux Treaty of 1868, between the U.S. and multiple bands of the Lakota people. Signed on April 29, 1868, it guaranteed Lakota ownership of the Black Hills and hunting rights in South Dakota, Wyoming, and Montana. While the land that the Dakota Access pipeline would cross is technically just north of the Standing Rock Sioux reservation, the tribe argues that the land was taken illegally from them via the Sioux Treaty of 1868.

The affected tribes in Standing Rock contend that these treaties are legally-binding and have been ratified by the U.S. Senate; therefore, the oil companies and federal government have failed to recognize and respect the Sioux’s sovereign rights.

While there are many people who support the project, citing job creation as a positive byproduct of pipeline completion, others disapprove of  how the project was implemented. Many Native American landowners have had their land taken away from them against their will to clear a route for the pipeline using eminent domain. Eminent domain is the governmental power to take private property for public use and is the most common way to grant legal right of way easement. An easement is an encumbrance on private property; while landowners still retain ownership of their property, they lose the ability to freely use the portion of the property with the easement on it. U.S. law requires that landowners receive just compensation for the use of their land.

The Standing Rock Sioux tribe has vehemently opposed the project, arguing that it violates the Treaty of Traverses des Sioux and the Treaty of Fort Laramie, as noted previously. The tribe and a number of its supporters contend that the project will contaminate drinking water, as well as damage sacred burial sites, dubbing the pipeline the “Black Snake.”  The U.S. Army Corps of Engineers, which has jurisdiction over a small portion of the pipeline, suspended the project last year, after months of intense protests and controversies.

At the protest’s peak, roughly 10,000 people had joined the campsites and more than 200 Native American tribes pledged their support. In 2016, it was the largest congregation of indigenous people in the U.S. in decades, maybe even centuries. U.S. military veterans, several high-profile actors, politicians, artists, filmmakers, and other activists all lent their support.

The protests surrounding the Dakota Access Pipeline have not always been peaceful. According to reports, protesters have supposedly started fires, attempted to block roads, and have thrown petrol bombs at police. Police have also been accused of instigating violence and utilizing excessive force. Protesters have been attacked with pepper spray, freezing water, sound cannons, bean bag rounds, and rubber bullets. Police have also arrested hundreds of protestors on charges of criminal trespassing, rioting, and other felonies. At one point, the United Nations spoke out regarding the use of excessive force at the protest site.

Future of the Pipeline Project

In February 2017, the Trump Administration granted the final easement for that remaining section of the project. The Obama Administration, through the U.S. Army Corps of Engineers, had put the project on hold pending an environmental impact statement. Shortly after taking office, President Trump signed an executive memorandum on January 24, 2017, mandating that the pipeline project proceed. If all goes according to plan, that last 1.5 mile stretch of the pipeline will be completed in less than 90 days.

This hasn’t deterred activists and water protectors from fighting against its completion. Several marches in major cities, including a large-scale “Native Nations” march in Washington D.C., are currently in the works. Seattle’s city council also voted to divest more than $3 billion from Wells Fargo, citing the bank’s role as a major lender to the Dakota Access Pipeline as one of its reasons. The city of Davis, California soon followed suit, committing to withdraw its $124 million from the bank by the end of 2017. Wells Fargo has maintained that it is legally obligated to its contract with the pipeline.

Moreover, a legal challenge against the pipeline between the Standing Rock and Cheyenne River Sioux tribes and the federal government has been ongoing since 2016. The lawsuit contends that the Dakota Access Pipeline is an unlawful encroachment on the tribe’s heritage; it argues that the pipeline “might damage or destroy sites of great cultural and historical significance.” The National Historic Preservation Act, Clean Water Act, and Rivers and Harbors Act are the key laws at the crux of Standing Rock’s argument.

The tribe has stated on its website that if all legal actions and protest marches fail, resulting in construction of the pipeline, it will seek to “shut the pipeline operations down.” How that will exactly occur is still uncertain. One thing is abundantly clear: the Standing Rock Sioux tribe and its many allies have no intention of standing down against the Dakota Access Pipeline.

Despite clear opposition and legitimate concerns regarding the Dakota Access Pipeline, the project is scheduled to move forward and be completed in a few months. The project will certainly bring more jobs to the area and transport oil; however, it is absolutely imperative that these water sources and sacred tribal lands are not tarnished by the project. Moreover, it is critically important that protests over its construction remain peaceful, leaving violence and human rights violations behind.

Nicole Zub
Nicole is a third-year law student at the University of Kentucky College of Law. She graduated in 2011 from Northeastern University with Bachelor’s in Environmental Science. When she isn’t imbibing copious amounts of caffeine, you can find her with her nose in a book or experimenting in the kitchen. Contact Nicole at Staff@LawStreetMedia.com.
Share:
Related Itemsblack snakeCheyenne RiverDakota Access PipelineMissouri RiverSiouxstanding rocktreaty of fort Laramietreaty of traverse des Sioux