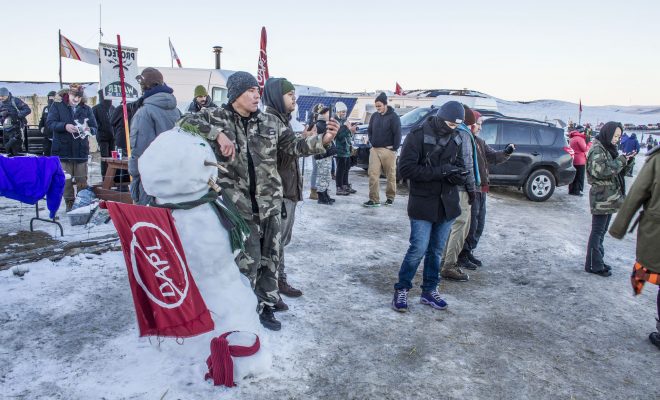 After almost a year of protesting the Dakota Access Pipeline, demonstrators at the Standing Rock Sioux Reservation went out in a literal blaze of glory Wednesday. Most of the occupants cleared the main protest camp ahead of a government-ordered 2 p.m. deadline, but not before first setting fire to their tents as part of an exit ceremony.

A handful of occupants remained on the grounds in a final act of defiance. Authorities arrested 10 people for not complying with evacuation orders, while a seven-year-old boy and 17-year-old girl at the site were hospitalized for burns.

The protest site in Cannon Ball, North Dakota resides close to where the government plans to build a 1,172-mile pipeline to transport crude oil through the Dakotas and Iowa to Illinois. The cause united environmentalists attempting to hinder the transportation of fossil fuels and the Standing Rock Sioux Tribe who opposes the pipeline over concerns that it will destroy sacred sites and contaminate their drinking water.

Over the summer, the Standing Rock Sioux Tribe filed an injunction against the U.S. Army Corps of Engineers, arguing that it did not properly consult the tribe beforehand and violated the Clean Water Act, National Historic Preservation Act, and the National Environmental Policy Act.

A judge later denied the injunction request in September. This prompted the company building the pipeline to counter sue the tribe for interfering with construction. Small protests at the designated pipeline locations began to expand in August following the countersuit.

In the fall, Standing Rock began to attract national attention as confrontations between demonstrators–who call themselves water protectors–and private security guards became violent. Protesters reported being pepper sprayed and bitten by security dogs, and a few officers also said they had been injured.

In late October, military personnel and police in riot gear attempted to force protesters out of an encampment by using pepper-spray and firing beanbag rounds at the crowds. According to authorities, the protesters were attacking officers with firebombs and debris.

News about the movement spread on social media as Facebook users from across the country “checked in” at Standing Rock to prevent police from finding protesters online (although the effectiveness of this effort was unclear) and show solidarity with those present at the site.

Tensions escalated even more the following month when authorities shot rubber bullets at demonstrators who had been praying, and sprayed water cannons on crowds right before Thanksgiving weekend as temperatures dropped below freezing.

Protesters achieved a temporary victory in December when the Obama administration and the Army announced that they would suspend work on the project and consider “alternative routes for the pipeline crossing.”

However, President Donald Trump made the decision to move forward with building the pipeline just a few days into his presidency, which brings us to today. Protesters were told to evacuate by Wednesday because of expected floods at the site. The state of North Dakota offered shelter and bus tickets to those exiting the campground.

But the protests aren’t over yet–the movement will just take place elsewhere. In March, a group of activists are planning to march on Washington, D.C. for four days, where they will set up a prayer camp on the National Mall.

Victoria Sheridan
Victoria is an editorial intern at Law Street. She is a senior journalism major and French minor at George Washington University. She’s also an editor at GW’s student newspaper, The Hatchet. In her free time, she is either traveling or planning her next trip abroad. Contact Victoria at VSheridan@LawStreetMedia.com.
Share:
Related ItemsCheyenne river SiouxDakota Access PipelineDAPLDonald TrumpNorth Dakotastanding rockStanding Rock Sioux TribeTrump