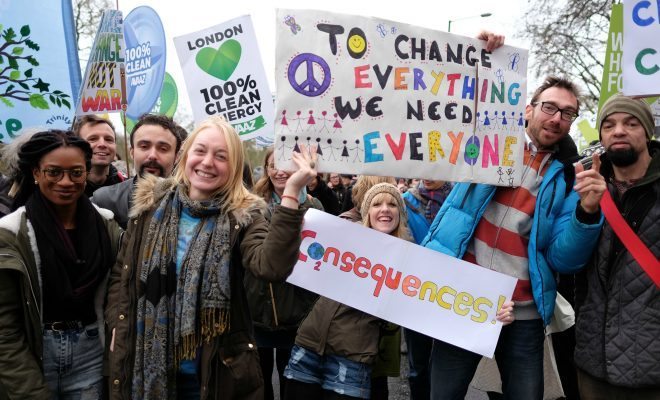 The Paris Climate Change Conference: What Should We Expect?

At the end of November, UN delegates will gather in Paris for the 21st Conference of the Parties (COP) and engage in the annual Framework Convention on Climate Change (UNFCCC). Nearly two decades after the Kyoto Conference and 10 years since the implementation of the Kyoto Protocol, the United Nations is still struggling to create a legally binding solution to climate change. As Paris looms, there’s a sense of cautious optimism that this conference may finally promote the action to avert the climate change threat on the horizon. Read on to find out about the major events of the conferences over the last 18 years and the impacts they have made.

What can we expect from this year’s Climate Change Conference?

Scientific consensus has concluded that the human production of greenhouse gasses (GHGs) beginning with the industrial revolution have impacted, and are continuing to impact, the global environment. GHGs include carbon dioxide, methane, nitrous oxide, sulfur hexafluoride, hydrofluorocarbons, and perfluorocarbons.

A 1995 report from the United Nations’ Intergovernmental Panel on Climate Change (IPCC) concluded that “the balance of evidence suggests a discernible human influence on global climate.” In 1997, the Kyoto Conference produced the Kyoto Protocol, which attempted to establish caps on industrialized nations’ carbon emissions. Most European countries agreed to the legally binding treaty, but the U.S. Senate failed to ratify it. In 2001, the Bush administration formally rejected the Kyoto Protocol.

Climate change currently holds a prominent place in the U.S. Intelligence Community’s annual Worldwide Threat Assessment. Global climate change threatens strategic resources, habitable coastal regions, food supplies, promotes the spread of infectious diseases, leads to more extreme weather events, and exacerbates humanitarian crises. The generally accepted figure for average global temperature rise in the last century is 0.8 degrees Celsius and the projected rise in the next century will be an additional 1.2 degrees. However, many scientists fear the temperature rise could be more severe, projecting as much as a 4 degrees Celsius rise from pre-industrial levels by 2100.

Such an increase would reduce the amount of habitable land available, cripple agriculture, and lead to major flooding in coastal regions. Nations previously resistant to the idea of a severe climate change threat are coming around to engage in the international discussion.

After the 1995 report from the Intergovernmental Panel on Climate Change (IPCC) concluded that the evidence supports the existence of human-influenced climate change, the United Nations sought to create a treaty to deal with the issue. In 1996, U.S. undersecretary for global affairs Timothy Wirth stated that the Clinton Administration accepted the findings of the Intergovernmental Panel on Climate Change and called for legally binding targets for greenhouse gas reductions to be drafted. In 1997, the Conference of the Parties met again, this time adopting the Kyoto Protocol. The conference acknowledged that the majority of the burden to halt climate change fell on the industrialized Annex-I countries (developed countries like the United States, Japan, Russia, and most of Western Europe). Several developing (Annex-B) nations also accepted the stipulations of the Kyoto Protocol.

The Kyoto Protocol introduced mechanisms such as emissions trading, a global fund–to assist developing countries to minimize their emissions–and a monitoring system to measure emissions and ensure compliance. Nations that ratified the agreement had to independently find solutions to cut their emissions. However, the Protocol allowed for flexibility, acknowledging that the cost of reducing emissions varied among countries.

Enforcement of the Protocol was relatively weak, but still present. A nation failing to hit its initial emission reduction target would be required to increase its secondary target by 30 percent and would be barred from the emissions trading program.

Although President Clinton signed the agreement, the Senate refused to ratify the Protocol due to the exemption of countries like China and India, which the protocol classified as developing. Ultimately, the United States feared that the protocol would damage its economic competitiveness.

Early in his presidency, George W. Bush rejected the Kyoto Protocol for the same reasons the 1998 Senate refused to ratify it. The United States also did not participate in the 2001 Climate Change Conference held in Bonn, Germany, choosing to observe.

The previous conference in the Hague in 2000 devolved rapidly into an argument over enforcement policies and political disagreements. The disagreement created between the United States and the European Union eventually caused the talks to be suspended and resumed at a later date. As a result, there were low expectations for the 2001 conference. One of the major remaining issues was the role of carbon sinks in net carbon reduction (championed by the United States) versus direct source reduction (preferred by the E.U.). With the U.S.’s withdrawal in 2001, many feared the Kyoto Protocol would collapse.

The Protocol could only be ratified if agreed upon by nations making up 55 percent of global carbon dioxide emissions from 1990. The United States was responsible for 35 percent of GHG emissions in 1990, so its withdrawal meant that countries such as Russia (17.4 percent) and Japan (8.5 percent) had strengthened negotiating positions. Without either of these two nations, the Protocol would likely collapse.

Despite the high stakes and low expectations, an agreement was reached. The Bonn agreement allowed for nations to use various mechanisms, such as carbon sinks, to achieve their target emissions reduction without necessarily reducing their GHG production. The agreement tackled forest and crop management which had proved significant to negotiation breakdowns at The Hague, allowing for countries to credit land allocations toward their GHG reduction, but included a hard cap to these credits. The success of the negotiations at Bonn set the Kyoto Protocol on the path to international ratification.

In 2005 in Montreal, Canada the Kyoto Protocol entered into force at the first annual Meeting of the Parties. The Protocol was extended beyond its initial 2012 expiration and set in motion plans to negotiate deeper cuts to GHG emissions. The optimism for the future of the Kyoto Protocol dimmed a little in Nairobi the following year. While certain steps were taken to include developing nations in the Protocol, the negotiations also faced criticism. Observers like BBC corrospondent Richard Black criticized many delegates for failing to effectively discuss cutting emissions for fear of economic costs and competitiveness. This has been a recurring criticism of the global effort to reduce GHG emissions.

In order for countries to pursue solutions based on national interests, they would need to see climate change mechanisms as opportunities to increase economic growth rather than costs. The concern is always that making money, rather than reducing emissions, is the priority for governments at these conferences. The Nairobi conference also raised questions as to whose climate problem the U.N. is solving. The responsibility to reduce emissions lies largely with the wealthy, developed nations while the impact is most strongly felt by poorer, less developed nations.

These concerns eventually led the international community to re-evaluate the Kyoto Protocol and begin new negotiations on emissions cuts, suggesting global emissions would need to see a 50 percent cut in the near future. Work on technology transfer to developing countries was extended but only on a limited basis.

Prior to the 2009 Meeting of the Parties, most anticipated that an emissions reduction goal would be agreed upon, as the first commitment period to the Kyoto Protocol was to end in 2012. However, leading up to the conference, world leaders elected to put off the crafting process for a later date. Most of the major negotiations fell short and one of the few takeaways from the Copenhabgen conference was an external agreement between the U.S., China, South Africa, India, and Brazil. This conference is widely considered a failure by those preparing to attend the 2015 Paris Conference.

Because the five-nation agreement was external, it was not considered binding by the U.N. Although it calls for individual nations to track pollution-related goals and allocate funds for developing nations, the agreement failed to produce the long-term goals. Developing nations felt excluded, as did the E.U., while all parties felt the conference itself was sub-optimally organized and run.

The Durban conference set in motion the events leading up to the Paris conference of this year. It was agreed that a legally binding deal would be ratified by all countries in 2015 to take effect in 2020. Additionally, the framework for the Green Climate Fund (GFC), which had been established the previous year, was adopted. The GCF would assist poorer countries adapt to the climate change challenges. The president of the conference declared the Durban Meeting of the Parties a success, though scientists warned that more drastic action was needed to avert the 2 degrees Celsius increase predicted for 2050.

What to Expect from Paris

So far, 148 out of 196 countries have met the U.N. deadline to submit emissions reduction plans leading up to the Paris conference. The U.N. argues that if more countries submit these plans, it is more likely that the conference will result in a strong global treaty. India’s plan drew attention by stating that the country would require 2.5 trillion USD to meet its emissions goals. While it is unclear how much of that money India intends to draw from foreign investments, it is clear that it will have to be a significant amount.

The IPCC has also elected a new chairman for the first time in 13 years. Hoesung Lee of South Korea will chair the Paris conference. While it is still very early, many have approved of the selection, suggesting he could serve as a link in negotiations between the developed and developing countries.

The Paris conference will be tasked with ratifying a legally binding treaty much like the one produced at Bonn in 2001. While almost all of the U.N. member nations have accepted the reality of human-influenced climate change, there will likely be intense debate over how net emissions ought to be reduced. As always, the weight of economic and competitive costs will weigh on the minds of delegates from developed countries while delegates from developing countries will continue to press for climate change adaptation funds. There is currently a very real sense from the global community that something must be done and a cautious sense of optimism that something will be.

The history of the U.N. Framework Convention on Climate Change is long and messy. While most agree on the necessity for global emissions reduction, there are numerous disagreements over how to do so and who is primarily responsible. Most agree that the primary blame for climate change lies with the developed nations, but there are questions regarding how much these nations should help those that are currently developing. The role of emissions sinks has been contested before and may come up again in Paris. Meanwhile, India, China, and the United States will play major roles in determining the success of the Paris conference, and the ultimate effectiveness of any agreement reached. While the UNFCCC has been successful in reducing global emissions over the last 10 years, there is still much more work to do, and only time will tell if the nations of the world are up to the challenge.

UNFCCC: Provisional Agenda for the 21st session of the Conference of the Parties

Hoesung Lee: The Risk of No Action

BBC: Why did Copenhagen Fail to Deliver a Climate Deal?

BBC: Kyoto: Why Did the US Pull Out?

Samuel Whitesell
Samuel Whitesell is a graduate of the University of North Carolina at Chapel Hill having studied History and Peace, War, and Defense. His interests cover international policy, diplomacy, and politics, along with some entertainment/sports. He also writes fiction on the side. Contact Samuel at Staff@LawStreetMedia.com.
Share:
Related ItemsClimate ChangeIPCCKyoto ProtocolParis ConferenceUNFCCCUnited Nations