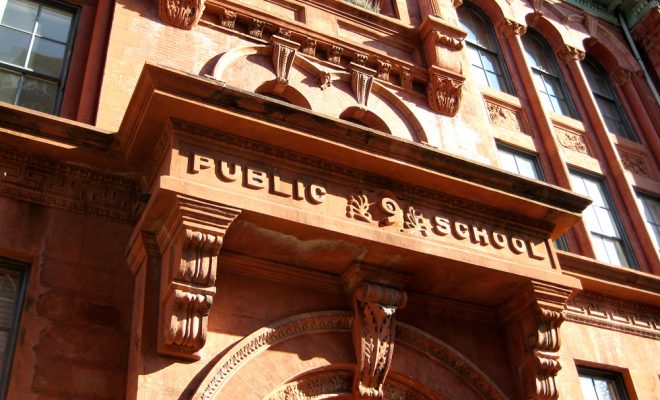 School Choice: Is It the Future of the American Public School System?

America’s education system has become increasingly more complicated in recent years, as U.S. students continue to lag behind many other industrialized nations in academic achievement. In new data from the Programme for International Student Assessment (PISA) on international math and science assessments, U.S. students ranked an unimpressive 38th out of 71 countries in math and 24th in science. While the U.S. is one of the most advanced nations on the planet, public education remains a dismal system in the states. Many seeking to improve the status of education advocate for school choice, touting voucher programs and charter schools as the ideal method to fix America’s broken school system. The guaranteed effectiveness of these methods, however, is questionable given extensive research–begging the question: is school choice the right choice?

What is School Choice?

School choice allows for parents to pick any traditional public school or charter school in a particular school district. The movement for school choice is attributed to Milton Friedman’s 1955 essay, “The Role of Government in Education,” in which he proposed giving families redeemable vouchers for educational services. Following the essay’s release, the concept of freedom of choice in education gained popularity.

Arguably, school choice is a favorite among large corporations and more wealthy conservatives, although some Democrats, including President Barack Obama, support the idea (Obama called for expanding charter schools when first addressing Congress in 2009). The education style is backed mostly by right-wing organizations and business such as the Heritage Foundation, a conservative think tank, and the Koch brothers, some of the world’s richest and best known political donors. Even with the support of some moderate conservatives and liberals, the primary backers of school choice are extremely conservative activists seeking to radically transform public education in America. While school choice is touted as a social justice movement and a program committed to procuring effective education for all children, it does have some serious issues.

Research has found that school choice actually widens the achievement gap between white and black children. Moreover, it often advocates dismantling public education, rather than attempting to make it stronger. It has often become a mechanism of privatizing education and defunding public schools, starving the remaining public institutions of funds and quality teachers.

The concept of school choice may be fueling the transformation of public education into a business. The reason many corporations favor the school choice model is that it allows the wealthy to profit off of the education system. Teachers may also experience more punitive environments; as parents begin to choose schools because of performances on standardized tests, teachers will receive the full blame when students score poorly on a high-stakes test. Making a teacher the scapegoat for lackluster performance shifts blame to an individual, rather than tackling the systemic problems in education.

Charter schools have become an increasingly popular choice around the country. These schools are publicly funded, but are governed by appointed boards and tend to be run by private companies. Currently, 43 states and the District of Columbia allow charter schools, with 22 states having some sort of cap that limits the number of charter schools.

Charter schools were first created in Minnesota and endorsed by Bill Clinton in the 1990s. Specifically, charter schools are public schools that are accountable via a contract or “charter” to public bodies; if they fail to meet the agreed-upon terms of the charter, they can be shut down quickly. Charters are also accountable for student performance on standardized tests. However, in a 2009 Stanford study, only 17 percent of charter schools were found to provide better education than public schools.

Charter schools may also have negative consequences for traditional public schools. A 2015 study from Michigan State University’s Education Policy Center determined that exceedingly high percentages of charter schools had a devastating impact on poorer school districts in Michigan, such as Detroit. Unlike other states, roughly 80 percent of Michigan’s charter schools are run by for-profit companies. Once charter schools reached 20 percent or more enrollment, it became far more difficult for the traditional schools to compete.

School vouchers are government certificates, backed by state dollars, that allow parents to choose which school to send their children to, including private or religious institutions. Vouchers have come under intense criticism for diverting public money away from public schools and have been accused of disproportionately assisting wealthy white families, while neglecting minorities in poorer communities–ultimately reducing diversity in classrooms and  fostering segregation. The National Education Association, the largest labor union in the U.S. representing public school teachers and other support personnel, is a strong, vocal opponent of school vouchers.

Those who support vouchers argue that the programs are actually more diverse. Many voucher programs are targeted to specific populations, such as low-income students or students with disabilities. Moreover, research conducted in Milwaukee and Washington, D.C. found that money was not necessarily drained from public schools because of school vouchers. Instead the program assisted in saving Wisconsin money and infused the city of D.C. with federal funds in exchange for passing a voucher program.

But major studies of voucher programs tell a different story. In late 2015, results from a study on the Indiana voucher program found that voucher students who transferred to private schools experienced significant losses in achievement and no real improvement in reading. In a study of Louisiana’s program, researchers found large negative results in both reading and math; elementary school students who started in the 50th percentile in math and then used a voucher to transfer to a private school plummeted to the 26th percentile in just one year. Finally, a third voucher study in Ohio uncovered that students who used vouchers to attend private schools actually performed worse academically compared to closely matched peers attending public school.

The appointment of Besty DeVos, a conservative philanthropic billionaire, as the Secretary of Education, will likely ramp up lobbying for school choice programs. As the new Department of Education head, she is committed to making vouchers and other school choice policies the heart of education reform. DeVos, someone with no real public school experience, has even stated that historically black colleges and universities were “pioneers” of school choice. While that is certainly not the case, her statement illuminates her naivety and the new administration’s willingness to push school choice programs.

Over the years, DeVos has been ardent supporter of vouchers for private religious schools. DeVos was raised in the Christian Reformed Church, a conservative Dutch Calvinist denomination. In a 2001 interview for The Gathering, a group focused on advancing the Christian faith via philanthropy, DeVos stated that there were “not enough philanthropic dollars in America to fund what is currently the need in education…Our desire is to confront the culture in ways that will continue to advance God’s kingdom.”

Critics note that DeVos is attempting to change the definition of school choice to allow taxpayer money to follow students to any private school through vouchers. This implementation of “universal school choice” would allow funds to funnel into religious private schools. Trump’s education proposal calls for allotting $20 billion in federal money to help parents choose schools that are not “failing,” and instead send students to charter, private, or religious schools.

Many educators oppose the idea of school choice and privatizing education, noting that diversity is a critical aspect of well-rounded learning. Private schools may encourage too much student withdrawal, sheltering students from the rigors of real-world experiences with such specialized educational amenities and services. The research surrounding the efficacy of charter schools and voucher programs appears to tell a more complex story. More school choice does not necessarily lead to better results. Moreover, the U.S. should tread carefully when attempting to privatize the public education system. The American public school system’s ultimate goal should be ensuring that students are equipped with the knowledge necessary to become responsible, informed, and contributing citizens.

Nicole Zub
Nicole is a third-year law student at the University of Kentucky College of Law. She graduated in 2011 from Northeastern University with Bachelor’s in Environmental Science. When she isn’t imbibing copious amounts of caffeine, you can find her with her nose in a book or experimenting in the kitchen. Contact Nicole at Staff@LawStreetMedia.com.
Share:
Related ItemsAmerican public educationBetsy DeVosCharter SchoolsPublic Schoolschool choicesecretary of educationvouchers