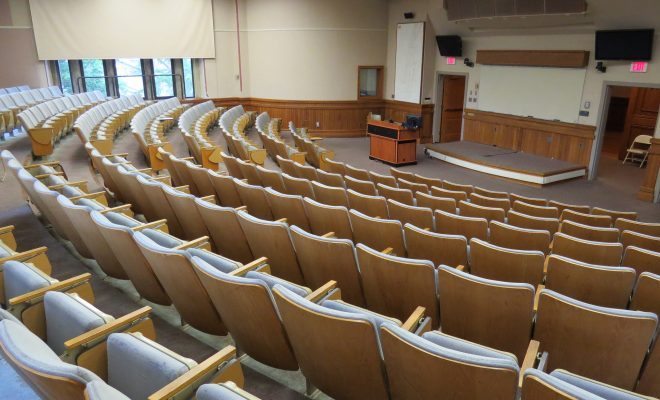 Professor in Name Only: Teaching Without Tenure in American Universities

For centuries, there have been a handful of professions that are respected and privileged around the world: doctor, lawyer, and professor all come to mind. These professions are often thought of in broad stereotypes–elderly men sitting in wood-lined studies, wearing jackets with patches on the elbows, and heading off to golf games at three in the afternoon. In reality, all three of these professions have diversified over the past fifty years, yet we still think of them as representative of the upper class. While medical and legal salaries are still generous and relatively stable, the same cannot be said for academia. Success as a professor is now inextricably linked to receiving tenure (a permanent job contract), without which professors are often relegated to “visiting” or “assistant/adjunct” professor status. Without the protection of tenure, adjunct professors are constantly vulnerable and rarely get the support and resources they need to put their best foot forward in the classroom. Read on for a look at the realities of being a professor in America.

In the American collegiate system, professors receive tenure after several years of teaching at a given institution, usually three years at community colleges and six to seven years at four-year colleges. Although tenure was designed to protect the academic freedom and economic stability of professors, many education experts argue that it promotes lackluster teaching, as professors cease to engage with their students as soon as they receive tenure. Tenure is not a lifetime job guarantee, but a school administration cannot dismiss a tenured professor unless they present sufficient evidence that the professor is incompetent or has behaved inappropriately, or that an academic department must be closed for financial reasons. Although most professors enter the teaching field with tenure as their ultimate goal, the number of tenured professors in the United States has been steadily declining in recent years. Colleges rely increasingly on part-time or non-tenure-track professors to fill their open positions, because they can hire and fire faculty on a rotating basis. A non-tenure-track contract is designed to hire for the short term, and while some PhD students embark on the non-tenure-track by choice, a majority view non-tenure-track positions as an interim until they can switch to the tenure track. Unfortunately, the more reliant colleges become on non-tenure-track professors, the fewer tenure track positions are opened. Non-tenure-track contracts let colleges save money, as they are paying professors “per course” as opposed to the fixed salary that tenured professors receive. According to Forbes contributor and Professor David Kroll,

Rather than paying a professor $75,000 plus benefits, you can now hire from the ranks of unemployed scientists a no-benefits PhD at $3,000-$4,500 per 3 credit hour class per semester. I have seen some tenure-track faculty actually be threatened by their supervisors with being replaced by such adjunct faculty if they can’t score grant funding. The abuse of adjunct faculty by US universities is a travesty.

A 2014 report by the U.S. House of Representatives revealed that a large portion of non-tenure-track professors live below the poverty line, whereas their tenured colleagues receive a significant and stable salary. The alleged exploitation of non-tenure-track faculty has flown largely under the radar in recent political debates over American higher education. The Obama administration has worked tirelessly to promote higher education–aiming to make it affordable and inclusive, encouraging as many students as possible to enroll. The introduction of the College Scorecard this year gave students access to a “data dump of epic proportions” but it doesn’t tell them anything about the professors who teach at a given school.

This is problematic for many reasons. For example according to Adrianna Kezar’s Delphi Project, students taught primarily by adjunct professors are more likely to drop out. According to an interview Kezar gave to The Atlantic last year:

This high attrition rate has nothing to do with the quality of instruction adjuncts provide; it is entirely a function of the compromised working conditions adjuncts face…universities do not give adjuncts the basic resources they need to properly teach their courses, such as sample syllabi or learning objectives. Since most departments hire adjuncts at the last minute, they are often inadequately prepared to enter the classroom. Universities do not provide adjuncts with office space, making it difficult for them to meet with students outside class. To make matters worse, many adjuncts teach at several colleges to make ends meet: Commuting—sometimes between great distances—further reduces the time they can devote to individual students.

The United States is graduating more students than ever before, yet there are concerns that we’re not paying attention to who is teaching those students and how well they are compensated for their efforts.

The Coalition on the Academic Workforce (CAW), an umbrella organization comprised of various academic unions and advocacy groups, has aimed to address the unjust nature of the existing tenure system. CAW has conducted various surveys of faculty across the nation and has published a series of reports condemning the inequality of the current academic system.

But the majority of CAW’s research, which concludes that pay is too low and there is little opportunity for advancement for adjunct professors, has been ignored by college administrations and politicians alike. Most lawmakers focus on public K-12 education when discussing tenure, balancing the interests of taxpayers and teachers unions. Higher learning is often left off the docket at town hall debates and round table discussions on whether abandoning tenure is the next great reform in education.

Although some adjuncts prefer the flexibility of a short-term contract, the majority of those surveyed in University of Michigan study were concerned with job security and the potential for professional growth.  The study also found that non-tenure-track faculty often felt they were disrespected or excluded in the workplace, suggesting that tenure-track professors rarely welcome their adjunct colleagues into their departments–perhaps because they fear they will be replaced by adjuncts, as Kroll suggested.

In public K-12 schools, tenure (which is usually received after three years of teaching) protects teachers from being fired without just cause. Though tenure is meant to protect teachers and reward them for positive work, parents and educational reformers often worry that it protects bad teachers while preventing more qualified teachers from entering the school district. Teachers’ unions have historically defended tenure, arguing that it protects teachers from discrimination and unwarranted criticism. In October, New York teachers unions sought to dismiss a case that would make it easier for school districts to fire teachers and extend the number of years necessary to receive tenure from three to four. The judge denied the motion to dismiss the case and it will move forward in the coming months.

The case argues that tenure violates students’ civil rights because inefficient  teachers receive job protection in some of the most disadvantaged schools in the country. In the case of K-12 education, cases are often fought between the teachers unions and a coalition of parents–each side is well-organized, committed, and can find political allies relatively easily. Almost every municipality has its own teachers union, which feed into larger regional and national union structures. By contrast, academia’s umbrella union, the American Association of University Professors (AAUP), only has chapters in a few dozen of the thousands of American colleges across the nation. AAUP aims to advocate for professors but it has nowhere near the political sway of K-12 teachers’ unions.

What are the arguments for preserving the current system?

Advocates for preserving the tenure track argue that it is the most effective defense against “anti-intellectualism” in academia. Without tenure, professors may be fired simply for having controversial opinions–Professor Jonathan R. Cole of Columbia University explains:

Tenure grew up in the first two decades of the 20th century in response to the abusive use of power by university presidents and Trustees who were free to fire professors for almost any reason, most often because of their social and political views…in the past decade, strong opposition to the War in Iraq and Afghanistan led to sanctions and dismissals of non-tenured faculty at American universities…f we demand conformity and orthodoxy among our professor, and we fail to protect them when they play the critical role that is at the heart of a great university, then the quality of our institutions of higher learning will inevitably decline.

Proponents of the tenure track also argue that providing tenure retains good teachers and attracts teachers of a higher quality to a given school, although this argument is often applied to K-12 schools rather than higher education. Tenure provides economic stability that makes the teaching profession more attractive, encouraging our brightest minds to give back to the next generation through teaching.

All of these arguments present valid reasons for preserving tenure, but critics worry that none of them address why tenure-track academia has become such an exclusive club in the United States. If tenure is such a beneficial system, why are universities so hesitant to expand it? Universities have the right to deny tenure if they find the candidate to be a bad professor, but if they are turning away qualified candidates merely to cut costs, the tenure system appears to have strayed far from its original goals.

In the twenty-first century, higher education has shifted from an option to almost an inevitable step in the lives of many high school students. As we send more and more students off to four-year colleges, it is critical we understand exactly where their tuition money is going and what they are paying for when they enroll in a course. Will they be greeted by a professor who is well-prepared, enthusiastic, and supported by the administration or by a professor who can barely present a coherent lesson–either because tenure has left them complacent or because the stressful nature of adjunct teaching has left them physically and mentally exhausted? We owe to it both students and teachers to create environments where talent is recognized and rewarded.  The tenure system needs to be debated and reformed both within individual universities and on a national level.  Unless we open this dialogue soon, there’s concern that we’ll see American universities mutate from beacons of learning and opportunity into inefficient programs that value cost-efficiency over education.

U.S. House of Representatives: The Just In Time Professor: A Staff Report Summarizing eForum Responses on the Working Conditions of Contingent Faculty in Higher Education

National Education Association: The Truth about Tenure in Higher Education

The  Atlantic: The Adjunct Revolt: How Poor Professors Are Fighting Back

Forbes: Top 10 Reasons Being A University Professor Is A Stressful Job

AFT: How Due Process Protects Teachers and Students

Slate: Finishing School: The Case for Getting Rid of Tenure

The Huffington Post: Why Academic Tenure is Essential for Great Universities

Jillian Sequeira
Jillian Sequeira was a member of the College of William and Mary Class of 2016, with a double major in Government and Italian. When she’s not blogging, she’s photographing graffiti around the world and worshiping at the altar of Elon Musk and all things Tesla. Contact Jillian at Staff@LawStreetMedia.com
Share:
Related ItemsAcademiaAmerican EducationEducationSchoolTenureUniversities