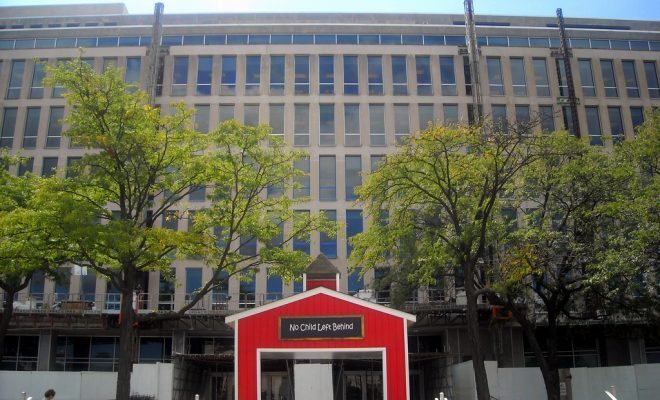 No Child Left Behind: Where is it Now?

The now much-maligned No Child Left Behind Act (NCLB)–an attempt to improve the American education system–became law in early 2002. Since then, NCLB has become a divisive political issue, called a failure by many, and blamed for many inadequacies of our admittedly weak education system. But beyond all of the politics, what have the ramifications of NCLB actually been? Read on to learn about NCLB, and what it’s done to measure student growth and teacher effectiveness.

What exactly is NCLB?

The No Child Left Behind Act is bipartisan legislation signed in 2001 that was designed to improve student achievement and to help schools and parents work together to create educational solutions for struggling students. The act is based on four essential themes: accountability for results; doing what works based upon scientific research; expanded parental options; and expanded local control and flexibility.

The most controversial aspect of this act is the accountability for results. This requires states to create a single standardized test for each grade level to be administered to students of all levels, regardless of disability or educational background. Each state is required to determine a score on math and reading tests that they deem  to be “proficient.” All states were then required to have 100 percent of students score at at least that level on their standardized tests by 2014. Additionally, each state had to define “Adequate Yearly Progress” (AYP) and ensure that all student groups make AYP based upon standardized tests administered each year. These accountability measures, according to NCLB co-author Representative George Miller, were intended to be diagnostic and to help schools and parents work together to remedy student weaknesses.

What’s the argument for NCLB’s effectiveness?

Advocates of NCLB argue that accountability serves as a way to identify areas where schools and students need improvement, and enables schools and parents to work together to make those improvements. No Child Left Behind mandates that its quota of 100 percent of students reaching the proficient level by 2014  includes students with disabilities and students from low socio-economic backgrounds. Advocates argue that accountability and testing ensure that these often marginalized groups do not slip through the cracks and that they obtain the support and resources they need to succeed in school.

The Act also demands higher qualifications for teachers as well as giving parents the option of transferring their children out of schools that have failed to meet their AYP quotas; both aspects have been seen as a step toward improving the American education system. Additionally, schools that do not meet their AYP receive technical assistance from the federal government and are required to draft an improvement plan aimed at targeting the groups of students who did not show improvement on standardized tests. Supporters of NCLB find these measures helpful in providing quality education to all student groups and in improving education in areas previously allowed to fall behind.

Why do people want to get rid of NCLB?

Opponents of NCLB argue that standardized testing is a flawed method of gauging student learning and that “accountability” causes schools and teachers to teach to the test. Opponents of standardized testing argue that these types of tests measure only superficial knowledge and do not measure critical or creative thinking. Scientists and psychologists have also determined that all students have different learning styles and intelligences; some are visual learners, some are kinesthetic learners, etc. Standardized tests, with their “one size fits all” method of testing, do not account for this diversity among student learning styles. Additionally, many students simply are not good test takers, and while they may know the content, the anxiety of test-taking impedes their ability to recall and use this information.

Due to this uncertainty about the validity of test scores, opponents of NCLB argue that schools and teachers are forced to “teach to the test” or “drill and kill.” With the funding of their schools and the security of their jobs hinging solely upon the results of standardized tests, teachers often feel they have to provide a narrow form of education for their students. These teaching styles require minimal critical thinking and understanding of topics, and instead rely on repetition and quick regurgitation of information to ensure students do well on a standardized test. This method of teaching offers an incomplete education to students and teaches them to simply memorize and repeat instead of understand the underlying concepts of a topic.

It has also been argued that states will lower their AYP quotas in order to meet NCLB standards instead of providing further funding for educational support. Opponents of NCLB argue that the act’s emphasis on accountability and standardized testing lead schools and teachers to adopt faulty educational methods in order to meet federal requirements.

NCLB can certainly be considered a good idea in theory that attempted to fix a struggling American education system. Unfortunately, the results speak for themselves, and they certainly leave a lot to be desired. NCLB still has some supporters who point out its advantages, but most are turning to new ways to reform our educational system.

Department of Education: “No Child Left Behind” Act (2001)

Department of Education: “No Child Left Behind” Act Is Working

NJDOE: No Child Left Behind Overview

National Center on Educational Outcomes: “No Child Left Behind” Act: What it Means for Children With Disabilities

Education: The Purpose of No Child Left Behind

RAND: Accountability for NCLB: A Report Card for “No Child Left Behind”

Schools of Thought: The High Stakes of Standardized Tests

Joseph Palmisano
Joseph Palmisano is a graduate of The College of New Jersey with a degree in History and Education. He has a background in historical preservation, public education, freelance writing, and business. While currently employed as an insurance underwriter, he maintains an interest in environmental and educational reform. Contact Joseph at staff@LawStreetMedia.com.
Share:
Related ItemsEducationEducation LawGeorge BushNo Child Left BehindStandardized Testing