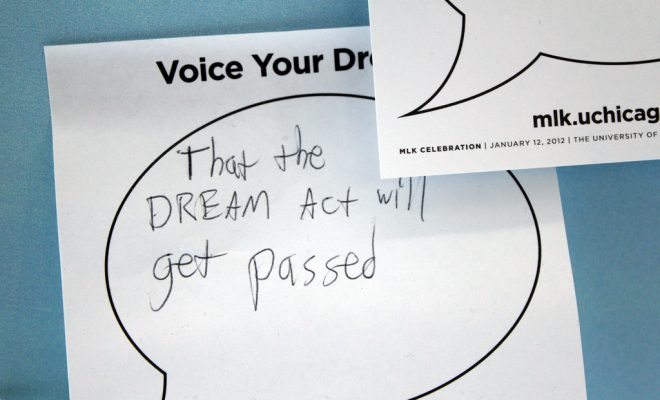 As of March 2012, there were roughly 11.7 million undocumented immigrants living in the United States, many of whom had brought their children with them when they crossed the border. America has been left to figure out how to deal with this massive immigration influx and to determine the best course of action for possible immigration reform. Special attention is paid to undocumented youth who were brought to America illegally as children and have been residing in the country for some time. One big question that the country is struggling to answer is should these young people receive in-state college tuition? Read on to learn about the debate.

What action has been taken?

The Obama administration started the program Deferred Action for Childhood Arrivals (DACA), which permits undocumented youth who were brought to the US under the age of 16 and have been in the US for more than five years to work, get a driver’s license, get a loan, and go to college without the fear of being deported. These youths have also attended their local school systems through programs designed to provide undocumented youths with a K-12 education. Now, as these individuals prepare to graduate high school, they are met with an insurmountable financial wall that prevents them from attending college and pursuing high-paying careers. While DACA permits these students to attend college, they are required to pay out-of-state tuition costs based on their immigration status, which can be considerably more expensive than in-state tuition. Out-of-state tuition is often unaffordable for undocumented families. Paying in-state tuition would greatly reduce this financial burden and make college a real possibility for many undocumented students.

Several states have begun passing “tuition equity” legislation that allows undocumented youths who have graduated from state high schools to pay in-state tuition costs at state schools. Advocates see this as a model of immigration and education reform. Seventeen  states currently provide tuition equity. However, this legislation has been met with strong opposition by those who feel that offering undocumented citizens in-state tuition cheapens American citizenship and rewards illegal behavior.

Advocates argue that tuition equity could benefit undocumented students and US citizens alike by providing a clear and navigable path toward achieving the American dream. Advocates argue that these students should not be blamed for the actions of their parents, and while they are not US citizens they have grown up and received their education in this country, and cannot call any other place home.

US public school districts currently spend roughly $243,000 per student to educate undocumented youths in K-12. Many feel that this effort and taxpayer money is wasted if these students, who have worked hard throughout their K-12 education, are not given a chance at an affordable college education. While many middle-class families currently struggle to afford hefty out-of-state tuition costs for their children, those tuitions are nearly impossible for undocumented citizens to afford. Upon this realization, many undocumented youths are motivated to drop out of high school and fail to live up to their academic potential. Advocates argue that making tuition feasible would inspire more undocumented students to graduate high school, attend college, and pursue a high-paying career, which could potentially benefit US citizens and the American economy.

Having a college education would encourage more of these students to enter the job market as tax-paying American citizens. The influx of more college-trained individuals into the job market could encourage job growth through entrepreneurial enterprises and increase tax revenue from the higher salaries these individual could make by having a college degree. In the long run, advocates say, tuition equity benefits undocumented and documented citizens alike.

Opponents of offering in-state tuition to undocumented students argue that tuition equity validates illegal immigration and is inequitable to tax-paying US citizens. The parents of undocumented students often do not pay taxes that contribute to the funding and maintenance of state colleges and universities, and opponents argue that therefore their children should be charged out-of-state tuition costs. The cost of running these educational institutions would instead be deferred to state citizens who are legal residents. Following California’s DREAM Act, a tuition equity bill signed into law in 2011, the nonpartisan Legislative Analyst’s office estimated that it would require an additional $65 million per year by 2016/2017 in order to provide higher education benefits to undocumented citizens.

Opponents also feel that tuition equity is inherently inequitable toward out-of-state students who are legal residents of the United States. These students would be required to pay a higher tuition merely because they happen to live in a different state than the college they are interested in attending, albeit legally. Some argue that if in-state tuition costs are offered to undocumented residents, then these same lower tuition rates should be offered to out-of-state legal citizens as well, at which point the concept of in and out of state tuition becomes moot.

Because tuition equity is largely backed by Democrats, some opponents feel that it is used merely as a political tool to attract the Latino vote and to secure a growing population for the Democratic Party. Opponents argue that tuition equity and DACA do not actually provide any real immigration reform, but rather pander to Hispanic voters. Momentum for tuition equity has been gaining steadily, however, and this debate will continue to unfold as more states struggle with questions of immigration and education.

The status of children who are brought into the United States illegally by their parents is a tough topic from all angles. Whether or not they should receive in-state tuition for college education continues to be a divisive fight at all levels of government. Some states have moved forward to allow it, while others continue the argument.

Voxxi: Oregon Is One Step Away From Allowing Dreamers to Pay In-State Tuition

American Immigration Council: Tuition Equity Could Be Coming Soon to a State Near You

Daily Californian: Children of Illegal Immigrants Should Not Go to College and Gain Legal Status

Joseph Palmisano
Joseph Palmisano is a graduate of The College of New Jersey with a degree in History and Education. He has a background in historical preservation, public education, freelance writing, and business. While currently employed as an insurance underwriter, he maintains an interest in environmental and educational reform. Contact Joseph at staff@LawStreetMedia.com.
Share:
Related ItemsCollege CostsCollege TuitionDACADREAM ActHigher EducationIllegal ImmigrationImmigrationImmigration ReformTuition Equity