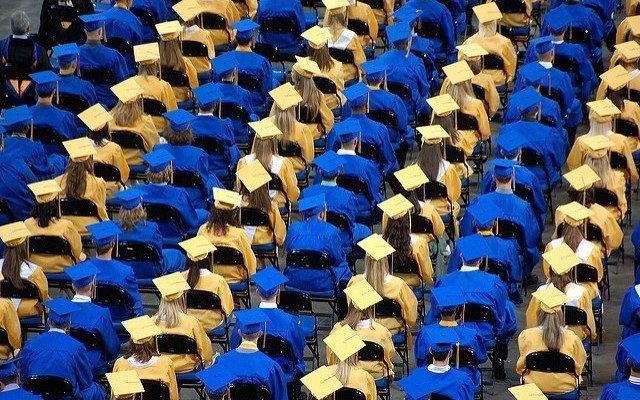 "Pomp and Circumstance" Courtesy of [Dave Herholz via Flickr]

What are the Candidates’ Higher Education Plans Post-Obama?

As primary season heats up, the candidates still remaining in the presidential race have begun fine-tuning their higher education plans. Candidates from both sides of the aisle have spoken about how they would change, revamp, and, in some cases, fix higher education. But aside from Marco Rubio, only those from the Democratic party had rolled out specific plans to address rising tuition costs and astronomical student debt prior to the first primary contest in Iowa.

While we evaluate who’s still left in the race, let’s begin to look at the remaining candidates’ positions on higher education. Keep reading to learn more.

In an appeal to lure African American voters and young people, Sanders asserted that tuition-free education would not force private historically black college and universities (HBCUs) to close down.

Representing the 6th District of South Carolina and an influential power broker in presidential primary races, Congressman James Clyburn expressed his concerns over the prospect of free public education and the impact on black colleges.

“You’ve got to think about the consequences of things. If you start handing out two years of free college at public institutions are you ready for all the black, private HBCUs to close down? That’s what’s going to happen,” Clyburn said.

In a recent interview with MSNBC’s Tamron Hall confirming his endorsement of Hillary Clinton, Clyburn also said of the Sanders tuition-free education plan and the America’s College Promise plan proposed by the current administration, “there are no free lunches so there will be no free education.”

Part of the Sanders education plan also includes lowering the interest rates on student loans. Sanders hopes to reduce loan interest rates to what they were 10 years ago. In 2006, undergraduate student loans hovered around 2.37 percent, which would cut the current rate of 4.39 percent nearly in half.

Sanders believes students should be able to refinance their loans in a similar fashion as auto loans. According to Sanders, if a loan for a car can be obtained at a 2.5 percent interest rate, why are students forced to pay between 5-7 percent for multiple decades? From the beginning, Sanders has vowed to prevent the federal government from making money on student loans but it remains to be seen just how he’d stop the profiting.

There are commonalites between Democratic candidates Sanders and Clinton surrounding student debt and tuition-free community college. While Sanders believes there is a way to make both two-year and four-year public colleges tuition-free, Clinton’s New College Compact plan stipulates that students should never need to borrow to pay for tuition, books, and fees to attend a public in-state university. The Clinton education plan also calls for the ability for Pell Grants to be used for living expenses.

Marco Rubio’s higher education plan, which emphasizes access and affordability, includes cheaper options for online education. Rubio also calls for students to treat themselves as commodities when applying to college, and asks students to embrace what he refers to as “human capital contracts” by selling themselves to private investors.

He asserts that students should know how much they could expect to earn before taking out a loan to pay for their education. Rubio maintains that the current higher education system in this country is outdated, broken, and “needs a disruption,” citing that college is too expensive, time consuming, and inflexible. Rubio uses partisan language to explain that the Democrats’ approach to fixing higher education is the same one attempted in Washington for decades by pouring money into an outdated system and raising taxes.

There are some facets of Rubio’s education plan that are consistent with Clinton and Sanders. They are in agreement on investing in student success and wanting to simplify the Free Application for Federal Student Aid (FAFSA). However, Rubio wants to implement an automatic income-based student loan repayment plan in order to ease student loan debt. The current administration has already enacted repayment plans that are income-based as an option, but Rubio believes this should be the sole universal method for federal student loans.

In an effort to move higher education into the 21st century, Rubio wants to ease access to state colleges and online education opportunities, and reshape accrediting entities to accommodate non-traditional education. This may raise concern with voters based on his ties to the for-profit Corinthian Colleges, which have contributed to his Reclaim America Pac.

Last spring, Corinthian Colleges filed for Chapter 11 bankruptcy and shut their doors for good, which adversely impacted over 16,000 students. In December of 2015, the Obama administration began the process to forgive nearly $28 million in federal student loans for over 1,300 students that said the now-defunct Corinthian Colleges violated their rights on grounds that they used deceptive tactics to convince students to take out loans. Now up to 350,000 students could be forgiven for taking out loans to pay tuition.

GOP Candidate Governor John Kasich of Ohio plans to keep college affordable by focusing on the 100 percent performance-based funding formula that emphasizes completion and graduation rates. The formula that has kept Ohio a leader in the nation with regard to freezing tuition rates for the next couple of years, Kasich plans to expand what has worked in Ohio to a federal level. The remaining focuses of Kasich’s education plan are centered heavily on K-12 education.

Neither Donald Trump nor Texas Senator Ted Cruz have released their plans for higher education. However, in recent weeks Trump has been accused of scamming students with his for-profit Trump University, which began operating in 2005. Rubio attacked Trump, calling the university a “fake school,” and claiming the university has been defrauding students out of thousand of dollars after reports were revealed that students are currently suing Trump for restitution.

As the field narrows, voters are going to need to decide who their next president will be based on issues extending far beyond higher education. That said, the candidates left standing need to be clear about all of their plans. That includes laying out specifics on how to implement each education plan, including how they will be paid for, and who in the new president’s cabinet will oversee these implementations.

Some of these higher education plans are more radical than others, but hopefully as the election season gathers steam, voters will finally be privy to what higher education will look like for incoming students, new graduates paying back student loans, and mid-career professionals who may seeking relief from drowning in student loan debt.

Jamal Evan Mazyck
Jamal Mazyck is currently pursuing an Ed.D. in educational leadership and is a graduate research assistant at San Diego State University. When he is not writing, researching or tweeting about the ins and outs of higher education, he can be found on the tennis court and running half-marathons. Contact Jamal at Staff@LawStreetMedia.com.
Share:
Related Items2016 Presidential ElectionBernie SandersCollegeHigher EducationHillary ClintonJohn KasichMarco RubioObamaStudent LoansUniversities