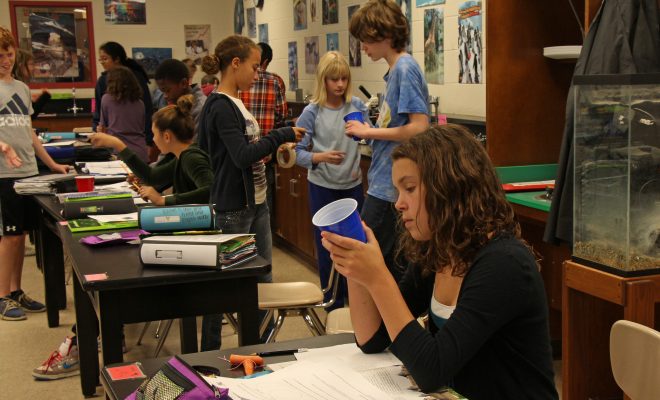 The Importance of Environmental Education in America

Environmental studies classes are offered in most colleges in a variety of different forms, including the scientific, engineering, political, and economic dimensions of the environment. However, environmental studies are very rarely offered before college, in elementary, middle, or high schools. There’s a growing population that argues that this should not be the case.

Incorporating environmental education into our public school system would provide an important opportunity to educate our population on an issue that’s shrouded in confusing and debated science–at least in the United States where more Americans than ever believe in climate change but 91 percent still don’t view it as a threat. Beyond this, it would help students to understand the fundamental systems of the world around them, including where and how they get clean water, electricity, and food. Environmental education is also often presented as an opportunity to explore alternative teaching methods, including hands-on, experiential forms of learning.

Of course, even as support for this idea grows, there are just as many people who oppose it vehemently, and the issue is handled differently state to state and region to region. Read on to learn about the way environmental education is handled as well as its proven benefits and disadvantages.

Those who oppose environmental education often do so on the grounds that its purpose is simply to indoctrinate a generation with the idea that climate change as a scientific fact. However, the environmental sector is also a multifaceted job market and early exposure to the field can open up new pathways to potential jobs for American students.

While there’s plenty of disagreement on whether climate change is real, most people would likely agree that it’s good that we have a clean and regular water supply. However, most people don’t even know how a watershed (the geographical space that feeds rainwater into an area’s water source) functions, let alone that there are jobs that they could seek to positively impact watershed management. Likewise, environmental jobs include seismologists who predict earthquakes, climatologists who study the weather, agricultural scientists who plan sustainable permacultures to ensure long-lasting food supplies, and urban planners who figure out how different areas can be built to ensure affordability, sustainability, and security against disaster.

While many see environmental studies as a largely humanities-based discipline and to an extent that’s true–there are many careers within environmental policy, business, journalism, etc.–there are also plenty of opportunities for scientific education. Environmental science and engineering are huge fields that could be taught to American students in ways that would align with our increased desire for STEM studies and careers. These are not “hard” sciences such as chemistry, biology, and physics but rather applied sciences, which directly pertain to certain aspects of natural life. Education in these disciplines can lead students to jobs like those listed above, which have a clear and concrete benefit to our society as a whole. Regardless of your position on climate change, the environment around us is a functional system that requires maintenance and oversight from experts, and education in these fields will create a generation of people equipped and motivated to do these jobs.

One of the central reasons so many people have decided to join the environmental education wave is that it allows for new and alternative teaching methods. Our current lecture-based, rote memorization system of public school education often leaves many students feeling bored or uninterested. Hands-on education has been explored as a way to lift this boredom while still imparting important information to American students. Because environmental education largely ties into the world surrounding us, lessons can be effectively taught in ways that allow students to directly work with nature. Environmental education provides a valuable opportunity to integrate a variety of academic disciplines into this hands-on style of education. This both allows students to process information in new and novel ways and connects their lessons to a real-world context.

How better to understand water quality than to actually go to a water source and do the testing? How better to gain an understanding of geological processes than to use the actual geographical area where you live as an experimental site? One of the most interesting avenues for environmental education is the use of school gardens, a movement that has been steadily growing in popularity. Most American youth (and to a larger extent American adults as well) only connect to their food via a grocery store and have little to no understanding of where and how that food is grown. School gardens bridge this psychological gap both by helping students understand the fundamental processes of agriculture while also providing a source of healthy and nutritious food within American schools, which have had difficulty providing effective diets to combat obesity. This kind of hands-on connection to agriculture and the presence of a local source of food are increasingly important when huge areas of earth known for producing food are experiencing severe water scarcity (in America, see: California).

While this may sound largely like hippie preaching, the numbers also agree with the advantages of experiential learning. Students who take part in hands-on learning often achieve higher overall test scores in other disciplines, including STEM classes, than those who learn through traditional lecture systems. This suggests that the addition of environmental education to a learning curriculum doesn’t take away from important time spent studying other subjects but enhances overall performance by exposing students to novel and exciting learning methods.

Increasingly, more people are starting to realize these benefits of environmental education and lawmakers have started to respond. This has led many states to begin implementing environmental education requirements into their educational policies. The initial push behind this came from the No Child Left Inside Act. Initially introduced in Congress in 2007, the effort passed in the House in 2008 but was not voted on in the Senate. The bill has been reintroduced in several sessions of Congress but has yet to become a law. The act sought to provide incentives for states to implement environmental education in elementary and secondary public school levels. States that participate would be eligible for grants to upgrade their curriculum, with the only requirements being a strong focus on environmental STEM studies and the use of outdoor field work. In this way, the act supports both the inclusion of environmental based learning and effectively opens the door for new experiential learning methods.

Although the No Child Left Inside Act failed to gain traction in Congress, the final version of the 2015 Every Child Succeeds Act contained some important aspects of the No Child Left Inside Act to encourage states to expand environmental education. The Every Child Succeeds Act was created to reform a Bush Administration law known as No Child Left Behind. It requires each state to make accountability plans for both short and long term goals to improve a series of different indicators of success, including test scores, English proficiency, and indicators the states pick for themselves. Special attention in the act is also given to low-performing schools, which are required to work together with state and district departments to increase test scores and graduation rates.

There’s little benefit to adding environmental education to our public schools if it detracts from other subjects that we’ve already agreed are important, and herein lies the challenge of educational reform. Incorporating environmental education into a standard curriculum can be tricky, especially because No Child Left Behind tightened up academic schedules throughout the nations and put an increased emphasis on boosting test scores. In the 15 years since the No Child Left Behind Act, our test scores haven’t seen any real improvement and interest in STEM has steadily dwindled. The Every Child Succeeds Act is a response to this current academic stagnation; a chance to restructure our curricula in order to boost our test scores by diversifying our educational tactics.

It’s important to note that the act does not make environmental education mandatory, and it’s up to each state to decide whether to use the funds made available by the act for that particular purpose. The states that do will have to carefully create Environmental Literacy Plans, the central goal of which is to figure out how to incorporate new forms of environmental information into students’ schedules in a way that does not detract from their other studies and instead enhances their overall performance. This is a very serious challenge, but the result of a successful ELP will be a generation that’s more aware and informed of the world around them. These plans will educate students on the environment’s most important issues and ensure that they are both motivated and equipped to make a positive difference.

The issue of environmental education for many people largely comes down to whether or not you believe it’s relevant for students to spend their time studying and learning about environmental concerns. Many simply don’t see any advantage of adding an entirely new field of learning to the schedules of overloaded students. In a sense, this is an ideological question about whether parents think the environment is of real relevance to their children’s lives, and many, many (millions) of people already have their minds made up on this issue. However, many do see the advantages of environmental education as a tool both to impart new and important information but also to open new doors to careers and improve our education system with novel teaching styles.

As time passes and more concrete results come out of states that have implemented environmental education, it will become possible to see benefits of educational reforms. While some states simply don’t have the right mix of lawmakers to ever approve adding environmental learning to the curriculum, others may shift toward approving it as they see higher test scores and happier students with a greater variety of job options.

YouGov: Global Survey: Britain Among Least Concerned in the World About Climate Change