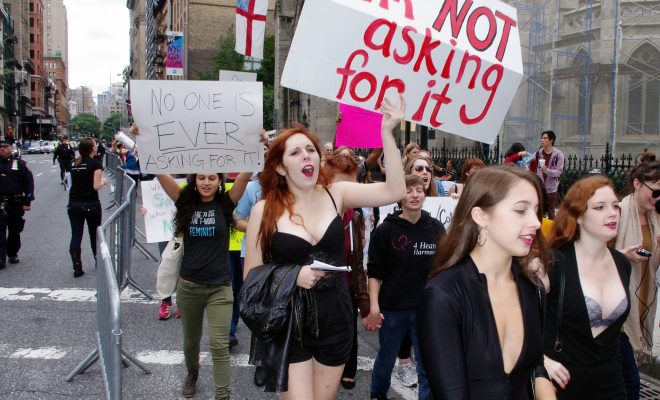 College Campuses and the Role of Affirmative Consent

When most people think about rape and sexual violence they imagine a situation where a woman is attacked by a man she does not know. We usually do not think of college campuses, particularly dating on college campuses, as a place where rape is likely to occur. Yet college campuses are a dangerous place for both female and male students and the rate of rape and sexual violence is startling. During their college years, one in five women are sexually assaulted or raped. And it is not just female students who are victimized, as 17 percent of student victims are male.

Rapes on college campuses do not fit our mental model for how rape occurs, which makes it difficult to combat and makes victims reticent to report crimes. Among college women, nine out of 10 knew their rapist. Rape is particularly likely for freshmen and sophomores, especially cases of incapacitated rape, which happens to 15 percent of female freshmen.

Despite high rates of violence, only 20 percent of victims report the crime to the police. There are multiple reasons why victims may not choose to go to the police. Oftentimes the victim and the rapist are in the same social circle and victims fear social reprisal for reporting. They may also fear that their claims will not be taken seriously by the police or school officials and that they may be subject to disciplinary action or criminal prosecution themselves. Remember, many of these victims have been drinking underage and/or using drugs prior to their rape.

Victims may also have been conditioned to think that their rape was not a “real” rape. Their rapist is someone that they know, not a stranger grabbing them in a dark alley. Force may not have been used since often the victim was incapacitated at the time. Our culture also offers multiple excuses for rapists and puts blame on victims who were intoxicated or otherwise “irresponsible.” These feelings of guilt on the part of the victim are internalized and expressed by not reporting the crime because it isn’t worth dealing with.

In an effort to combat the problem of rape on campus, many colleges and universities have adopted affirmative consent practices. The use of affirmative consent to change cultural attitudes about rape and/or to change rules on how to prosecute sexual violence has caused a great deal of controversy and should be more thoroughly examined.

What Is Affirmative Consent?

For a full background on rape culture and affirmative consent, you can read this article. But the video below, featuring journalism icon Gwen Ifill, also provides an excellent overview of the concept of affirmative consent and some of the push-back on adopting it as a standard.

So let’s unpack some of the arguments surrounding affirmative consent. Jaclyn Friedman, the affirmative consent advocate, explains that the “no-means-no” standard (where consent is presumed unless it is expressly denied) doesn’t deal well with some kinds of sexual assault. In particular, it does not provide adequate protection from abuse for victims who may freeze up and feel too unsafe to deny consent. This is actually a common reaction, particularly for victims who are sexually inexperienced, incapacitated, or conditioned to not resist. When the burden is placed on all participants to make sure that everyone is consenting, it eliminates some of these dangers. It also would eliminate a situation where one party feels they were victimized and the other party honestly does not feel they did anything wrong because they thought silence was consent.

In a culture where silence indicates a lack of consent, not evidence of it, it becomes much more difficult for this to happen. This could be especially helpful for younger college students, or the sexually inexperienced, who are in fact more likely to be assaulted than their older student peers.

Shikha Dalmia takes a different view on the issue because of how affirmative consent changes the burden of proof and, in her view, the presumption of innocence. Her main objection is not that we may want to adopt this as a cultural model for how consent works but that we might use affirmative consent as a legal framework. As she states, consent is already required, under the “no-means-no” standard. But we presume that there was consent until the non-initiator indicates otherwise. This presumption is necessary, in Dalmia’s view, to maintain a presumption of innocence for those accused of rape.

We have to take that concern seriously because the presumption that everyone is innocent until proven guilty is a cornerstone of our judicial system. But changing the presumption of consent does not necessarily lead to a change in the burden of proof/presumption of innocence.

In a formal rape trial, the prosecution currently needs to show that the victim did not give consent, but that is not the same as saying we assume they are lying. In some instances where the defendant is asserting impotence or intoxication as a defense against rape they are already required to prove that element of the case, yet it does not change the underlying presumption of their innocence. Requiring one party to prove an element of the charge does not mean that we assume that party is being deceptive.

We are placing the burden of proof on the prosecution to prove a lack of consent. And they offer evidence for this such as the actions of the victim and defendant, including but not limited to what was said. But if consent was not presumed that wouldn’t change the fact that we are still asking the prosecution to prove its case. Prosecutors would still have to contend with any evidence the defense offers to show that there was in fact consent, and they would still be offering their own evidence to show that nothing the victim did amounted to consent. It would change the understanding of what all parties should have understood at the time of the incident–that they should have obtained consent–not be a commentary on what the defendant did or did not do.

The second problem is how affirmative consent actually works in practice. Is it really something that will “work” on campuses, or in the general population, given our cultural scripts for how men and women behave sexually?

There are impracticalities to the use of affirmative consent but not for the reasons that detractors might suggest. The impracticality is not in asking for consent during a sexual encounter. The main obstacle is changing the cultural norm so that not getting that consent is a problem.

But hasn’t that been the case in all movements for increased social justice? Sharing a water fountain between blacks and whites was never impractical on its face, in fact, it is even more practical to have one water fountain. Just as affirmative consent as a model has the potential to reduce confusion and assault. The impracticality is from an unwillingness to implement a new system that changes social norms, gender norms in this case, not with the new norms themselves. There may not be enough evidence of how effective affirmative consent is on college campuses to draw a conclusion about its implementation. But there is some anecdotal evidence, suggested here, that even skeptics can incorporate affirmative consent into their sexual behavior.

The video below highlights both the concern about the practicality of the system and the appropriateness of how affirmative consent policies have been added to most college campuses. Many of these institutions adopted an affirmative consent model because the Obama administration, as part of the “It’s On Us” program, made continued federal funding contingent upon colleges dealing meaningfully with sexual assault. In the video, the panel discusses the issue in the state of California.

Some of these objections are based on a misunderstanding, sometimes a deliberately created misunderstanding, of affirmative consent. It certainly does not require written consent, and in fact, does not require even verbal consent. Obviously, a written document would be your strongest piece of evidence in a case trying to show you had obtained consent. But that doesn’t mean that it is the only way to do so, and this line of reasoning conflates the idea of how affirmative consent would work in practice in most sexual encounters with how affirmative consent might affect a legal proceeding.

What Affirmative Consent Would Change

Either at the school or the state level, a legal proceeding is only changed by explicit amendments to the burden of proof or the presumption of innocence. Affirmative consent does not do that. Our current prosecutorial system functions perfectly well, even when consent is at issue, without a document signed by the victim saying they didn’t consent. There is no reason to think that a written contract would be required simply by asking an initiator to make sure their sexual activity was welcome.

In fact, if you look at one example definition of affirmative consent used by a university, specifically the State University of New York, it explicitly includes actions as one method to show consent. The key is that the words or actions create a “clear permission” regarding willingness.

But there is still discomfort with the idea that the federal government can influence policy at colleges around the country by threatening to withhold funding. Some people think it is inappropriate to try to strong arm a college in this way.

And yet the government already engages in this behavior all the time, in other contexts, to promote fair treatment. One example is the area of special education. While I was at William and Mary I worked in our clinic for children with special needs, ensuring that they received FAPE–a free and appropriate public education. In exchange for federal funding, the state of Virginia agreed to follow certain guidelines for how they were required to handle children with special needs. Before the implementation of the law that allowed this, the Individuals with Disabilities Education Act, children with special needs were often shoved into a corner and ignored.

Most people would not object to this requirement because they realize that sometimes you need practical reasons to encourage socially just behavior. As much as we would like to think otherwise, people do not always behave morally on their own, state governments and colleges included. The federal government has consistently used the power of the purse to encourage behavior to support marginalized groups. The fact that they are doing so now, to protect students from sexual assault, should not matter. A prudish or squeamish reaction to the involvement of the government in sexual matters focuses on the sex and not on the violence. Rape that occurs when someone is incapacitated, knows the attacker, was drinking, etc. is just as much an act of violence as a stranger jumping a victim on the street. And there is no more quintessentially appropriate role for government than the prevention of violence against its citizens.

Affirmative consent may not be a panacea for the issue of sexual assault, even just on college campuses. The use of alcohol and drugs, the tight-knit social communities where these assaults occur, and the relative sexual immaturity of the age group all make sexual assault more complicated on a college campus. But the discussion of whether we want to adopt this model, either in a social or in a judicial context, has opened the door for people to grapple with what consent really means. That discussion is a valuable one for us to be having.

Mary Kate Leahy
Mary Kate Leahy (@marykate_leahy) has a J.D. from William and Mary and a Bachelor’s in Political Science from Manhattanville College. She is also a proud graduate of Woodlands Academy of the Sacred Heart. She enjoys spending her time with her kuvasz, Finn, and tackling a never-ending list of projects. Contact Mary Kate at staff@LawStreetMedia.com
Share:
Related ItemsAffirmative ConsentCollegeCollege CampusesSexual Assault