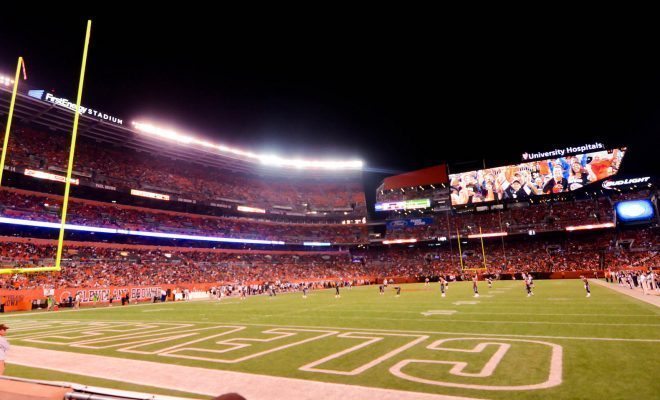 Stadium Deals: The High Price of Your Home Team

As of 2015, each NFL team was worth at least $1.4 billion according to Forbes. Despite these massive valuations, three teams–the Oakland Raiders, St. Louis Rams, and San Diego Chargers–hoped to leave their current cities and move to Los Angeles. The reasoning behind the desire to move was a yearning for a new, higher revenue stadium to play in. Each team was eager to leave its current city because of the failure of the local government to fund similar sites. This has increasingly become an issue in the NFL, as with other major sports leagues. It has even made international events like the World Cup and Olympics less appealing to host cities.

Read on to find out more about the real cost of having a hometown team, why the public keeps giving in to team demands, and how this problem has spread around the globe.

The cost to taxpayers to renovate or build new stadiums has been enormous, particularly when it comes to America’s most popular sport, professional football. Over the last 15 years, the NFL has received $12 billion in public funds. These funds are not isolated to a few teams either, 29 of the 31 stadiums in the NFL (the two New York teams play in the same stadium) have used public financing to build new arenas. Public support for pro sports teams comes in the form of tax breaks, loans, and grants offered primarily by a city or county and occasionally the state.

Despite this funding, most cities and voters have little, if anything, to show for it. In fact, some reports suggest that using subsidies to pay for stadiums can negatively affect metrics like poverty rates and median income levels. Robert Baade, a researcher of these stadiums and their economic consequences, disputes the clear connection between the two, but his own research suggests that new stadiums almost always fall short of delivering the promised economic uptick suggested when they are funded.

Even stadium-related costs for things like renovation go to projects such as luxury boxes or seat licenses, which are not typically accessible to the casual fan or those with less disposable income. These same fans also do not see any sort of break on the cost of tickets or concessions. In fact, the only group that really seems to make out well in all this is the owners. Not only do the owners get to keep most of the revenues from the stadium, minus a very modest rent, they also pay very little in upkeep costs.

The video below goes into detail about what goes into building these stadiums:

Since most economists agree that there are very little, if any, benefits to using public funds to build these stadiums, it may be worth considering why people agree to finance them at all. Sometimes, it may simply be because the public doesn’t know about the plans. In 2013 for example, the Atlanta Braves organization agreed to move the team out of the city and into Cobb County. The move was done in secrecy and all information about the deal was kept from the public because otherwise voters could have rejected the plan.

While the Braves left Atlanta to get funds from a nearby county, the city was already building a new stadium for its NFL team as well as a practice facility for a new MLS team. This move is also unfortunate because the original stadium, which was built for the Olympics and would become the Atlanta Braves’ home, was initially financed without any public money. Making matters worse, that stadium they are so desperate to move out of is not even 20 years old.

In the recent fight for the St. Louis Rams, the court voided a law requiring a public vote to approve stadium funding only to watch the Rams leave for Los Angles anyway. But when citizens actually do get the chance to vote on how their tax dollars are spent, sports teams have mastered an invaluable tactic to keep the money flowing. That tactic is the threat of relocation, or basically taking the hometown team hostage to see if the city and the taxpayers will pay up. Once again, the Rams are not the first to use this threat or to follow through with it. The Baltimore Ravens and Indianapolis Colts, two high-profile teams that have won Super Bowls in the last 10 years, both left the cities they originally played in when their demands for new stadiums were not met.

The following video gives a lighthearted look at how teams use the threat of relocating to get new stadiums:

While the Rams are clearly not the only team to move or used the threat of relocation in an attempt to leverage a city for a better stadium deal, it is the most recent. The Rams originally moved from Los Angeles in 1995, lured to St. Louis with a $250 million stadium paid for exclusively with public funds. However, as the stadium aged, Rams owner Stan Kroenke, the 63rd richest person in the United States, worth $7.6 billion, exercised an opt-out clause that let him flee St. Louis for Los Angeles and its much bigger media market.

This decision came even after St. Louis agreed to offer the Rams an additional $158 million while the new site in Inglewood, California offers no public funds at all. This may seem foolish, but as the owner of the new site–which includes amenities beyond just a football stadium–and landlord for whichever other teams play in Los Angeles, Kroenke is likely to make back his initial investment and more. Although Kroenke ultimately opted for a venue that does not utilize public funds, the Rams managed to get a remarkable offer from St. Louis. In the negotiation process, the owner, and to an extent the local government, utilized many of the classic leveraging techniques such as removing the influence of voters, threatening relocation, and ultimately following through on a threat to move.

While NFL stadiums are the biggest and most public culprits of the stadium financing problem, there are a number of high profile examples around the globe. These often come in the form of stadiums built for the World Cup and the Olympics.

After less than two years, many of the sites for the Men’s World Cup in Brazil sit idle, barely being used. Some of the stadiums are only now being finished while others are put up for sale so that the government can make back some of its investment–an estimated $3 billion spent on building and refurbishing the facilities. Brazil is also scheduled to host the Summer Olympics in 2016, a move that comes with similar problems but on an even grander scale.

The abandonment of Olympic stadiums has also become a major issue for host countries. Facilities in places like Beijing, Seoul, Athens, and Montreal sit abandoned or are rarely used just years after costing the cities that built them hundreds of millions of dollars. This is especially disconcerting because it comes with the additional cost of hosting the Olympics. In what makes the NFL’s demands look like pocket change, the cost of the Olympics has averaged $3.6 billion from 1968 to 2010 and $16.2 billion after that. As bad as these costs are, the fact that they have an average cost overrun of 167 percent is even more concerning.

In fact, due to the ever-rising costs of holding the Olympics, many cities now are hesitant to host future events. In the run-up to the selection of the site for the 2022 Winter Olympics; Poland, Germany, Switzerland, Sweden, and the Ukraine withdrew their bids when polls showed it would have been incredibly unpopular. Boston similarly followed suit when it withdrew its bid to host the Summer 2024 Games. Ironically, one of the best examples of a city actually repurposing one of its old Olympic stadiums comes from Atlanta where the recently abandoned Turner Field Baseball stadium was created by repurposing the 1996 Olympic Stadium. The accompanying video gives a chilling look at a number of stadiums used for the Olympics and then just abandoned:

Professional sports teams, like any business, are always seeking to maximize their profits and it is unrealistic to expect them to do otherwise. Even though the public usually pays a large portion of the cost for a new stadium, they rarely pay all of it. Instead, that cost is usually spread out between the owner–in the case of the NFL, all the owners by using something known as the G4 Fund. Sports leagues are not the only corporations utilizing these tax breaks and deals offered by local governments. Many companies take advantage of these opportunities and there is often less of an outcry when cities, counties, or states offer huge tax breaks to lure other organizations. While these teams and businesses may have a lot of bargaining power, the decisions to use public funds remain up to local governments, and in some cases, voters.

However, while there is certainly enough blame to spread around, only the owners of these teams or their partners tend to benefit from them. This is particularly true for NFL owners, as they not only benefit from stadiums but media deals as well. Until recently, the NFL was also considered a non-profit organization, giving it even more tax breaks.  All the public has to show for this is more debt, empty stadiums, and the knowledge that the next threat of a move could happen at any time. The situation is increasingly frustrating and begs the question: what can be done?

Unfortunately, there may not be much that cities can do. In his recent budget proposal, President Obama included a plan to end tax-free bonds for teams, but that has a long way to go before it becomes law. Other suggestions have included anti-trust lawsuits, but these too gained little traction. The ultimate problem is that there are more cities than teams, meaning the teams will always have leverage of some kind and cities are often interested in getting a new team.  The real lesson in all this is while we root for our favorite hometown teams we should remember those teams will likely only remain in our hometowns if the price is right.

Forbes: The Business of Football

The Huffington Post: “Taxpayers Have Spent A ‘Staggering’ Amount of Money On NFL Stadiums

Curbed: How Atlanta’s Stadium-Building Madness is Nothing New

St. Louis Business Journal: Kroenke (Stan and Ann) are some of America’s richest

The Wire: Turner Field Is the Latest In a Long Line of Abandoned Olympic Stadiums

Business Insider: The cost of hosting the Olympics is getting out of control

Slate: How to Stop the Stadium Wars

The Atlantic: How the NFL Fleeces Taxpayers

Michael Sliwinski
Michael Sliwinski (@MoneyMike4289) is a 2011 graduate of Ohio University in Athens with a Bachelor’s in History, as well as a 2014 graduate of the University of Georgia with a Master’s in International Policy. In his free time he enjoys writing, reading, and outdoor activites, particularly basketball. Contact Michael at staff@LawStreetMedia.com.
Share:
Related ItemsChargesCostFootballNFLOlympicsPro SportsRaidersRamsStadiumsWorld Cup