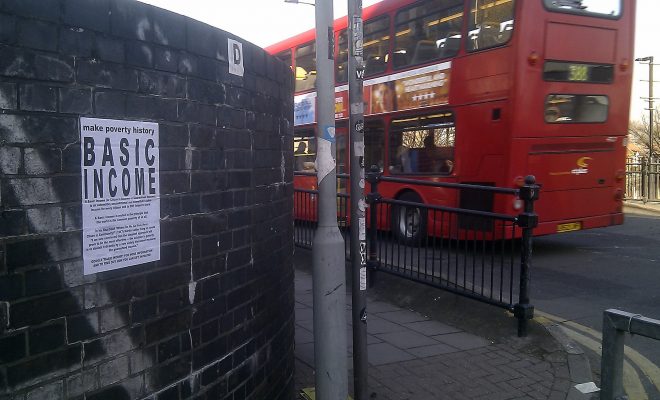 Earlier this week, the Canadian province of Ontario announced it would be conducting a pilot program for 4,000 of its residents, guaranteeing each person minimum income even if they did not work. While the idea of giving away “free money” may draw criticism from some, this is not a new concept. In fact, programs similar to this have been around for nearly 50 years, with the ultimate goal of eventually replacing the welfare system as we know it.

Read on further to find out more about guaranteed basic income (otherwise known as universal basic income or basic income), its purpose, the history behind it, and how it might impact the future of welfare programs worldwide.

So what is guaranteed basic income (GBI)? According to the Basic Income Earth Network (BIEN), this type of payment has five key characteristics: it is paid in intervals instead of all at once, the medium used allows the recipient to use it any way they want (it is not a Food Stamp card, for example), it is paid on an individual basis only, it is paid without a means test, and those that receive it are not required to work.

Everything else, such as the amount of money in each payment or longevity of payments varies based on the proposal. (In the Ontario test case it does have an income threshold and is paid to only the 4,000 included in the program; the rest of the principles still apply.)

The Purpose of GBI

Guaranteed basic income is not really “free money,” as some may claim; it does serve a few important purposes. An article from Law Streeter Eric Essagof already does a great job of explaining the GBI’s use in fighting poverty. Namely, the income encourages people to keep working, while also ensuring that if their income rises, they won’t automatically lose the benefits they rely on (also known as the “poverty trap”). In addition, in the United States at least, it could streamline a complicated system where someone who needs benefits has to sign up for five different programs that all fall under one welfare system.

There are other potential benefits associated with a guaranteed basic income. If people were assured of at least some income, they might be more likely to go to school for more education or training or even take a chance and start their own business. They could also pursue passions (such as writing, for example) that they are harder to take on when their time is dictated by the necessity to make money. For individual workers, a guaranteed income would also enable them to bargain more effectively with their employers and force employers to agree to concessions in order to keep their workers.

The Ontario GBI pilot program is certainly not the first of its kind; in fact, it is not even the first in Canada. The first program was conducted in the province of Manitoba in the 1970s, and led to societal health improvements while simultaneously not discouraging work participation. The idea for a universal basic income can be traced even further back than that–much further, in fact. In 1797 Thomas Paine, a pamphleteer famous for his work “Common Sense” in support of the American Revolution, stated that in exchange for social consensus among the people, the government should offer yearly payments to its citizens.

Since then there have been numerous debates between thinkers on all sides of the political spectrum, but generally basic income has been viewed as a positive. The accompanying video looks at the evolution of the basic income idea:

This type of program and the philosophy behind it have been embraced outside of Canada as well. The most recent effort was in Finland: earlier this year, the Finnish government selected 2,000 unemployed people at random to begin receiving a guaranteed basic income of €560 for two years instead of the unemployment benefits they had been receiving. The major advantage to this for the participants would be that if they found jobs they would still get to keep their basic income, as opposed to losing unemployment benefits.

Through the Finnish trial, which is still ongoing, the government wants to see whether this type of program can help the country’s ailing economy by encouraging part-time work. In addition to this trial, other similar programs worldwide have proven successful, such as one in Brazil in 2004 and another in Namibia in 2007. There was also a similar cash transfer pilot program in India from 2011 to 2012 that led to increased test scores and improved health in participating villages.

Despite the success of many of these programs, there seems to be a perception that they can only be successful in poorer countries and would never work in an “affluent” country like the United States. However, even the United States has some history with the guaranteed basic income. One of the earliest efforts, the Negative Income Tax Experiments, took place between 1968 and 1990 in New Jersey, Pennsylvania, Iowa, North Carolina, Indiana, Washington state, and Colorado. Although these experiments had successful outcomes, they were not politically popular and they lost their momentum. Arguably the most successful experiment so far concerning guaranteed basic income in the U.S. is currently ongoing, and can be found in Alaska.

In 1976, a permanent fund was set up in Alaska to preserve profits made by the oil industry to ensure that the wealth would benefit future populations in the state. This fund was allocated for a basic income program in 1982, and ever since then anyone living in the state for at least six months is eligible to receive a dividend from the state. At its peak in 2008, the fund annually paid out more than $2,000 per resident.

The following video looks at how the program is playing out in Finland and other places:

With more and more places willing to at least launch guaranteed basic income pilot programs, the future of the measure seems bright. This is especially true given the benefits that it so far has offered, along with the fact that automation is increasingly making many jobs obsolete. Currently, along with Finland, there are also ongoing guaranteed basic income trials occurring in Italy and the Netherlands, with Scotland considering a trial of its own as well.

While a basic income has been advocated by some philosophers, researchers, and other individuals, overall there has not been a tremendous groundswell of support. Even in places where pilot programs have been launched, these are usually only reserved for a few thousand people in countries with tens if not hundreds of millions of citizens. So, if this program has repeatedly proven so successful and could replace faulty welfare programs, why are countries not more willing to try them?

The answer starts with cost. In 2016, Swiss voters rejected a basic income for the country’s citizens, and while Scotland is considering adopting such program, the rest of the UK in general is resistant. This opposition comes even when polls show that up to 64 percent of Europeans approve of a basic income. Part of that, however, might be attributed to how the survey questions were worded, in that they do not mention tax increases necessary to provide that income.

Aside from cost, there are other considerations, such as the fear of automation. Although some fear this trend could lead to a dearth of jobs, some economists are quick to point out this same thesis has been made before with regard to past trends, and has been proven wrong by new innovations that, in fact, created more jobs. Additionally, while some want to use basic income to replace existing safety nets, there is no proof yet that exchanging one for the other is actually superior. Even some of the protections basic income is supposed to offer can be turned on their head, with a basic income convincing some employers they can pay lower wages. There’s also the argument that basic income will lead to people choosing simply not to work. The video below looks at basic income, highlighting some pros and cons:

Guaranteed or universal basic income as an idea has been around for hundreds of years. As an idea put into practice, it has been around for at least around half a century. Moreover, in seemingly every case, pilot programs incorporating basic income guarantees have been successful in a number of measures, from raising GDP and improving test scores to ensuring nutrition. Furthermore, these types of programs have been lauded by leaders on all parts of the political spectrum as everything from a panacea for solving the broken welfare system to necessary in a world that is increasingly automated.

However, for all its success stories, guaranteed income has never become widespread nor long-lasting. The reasons for this apparent contradiction are manifold and run the gamut from high costs to exaggerated benefits. Additionally, for every country that has adopted and embraced the idea there are others that have rejected it.

What is basic income’s outlook then? In a world that is increasingly feeling budget cuts and squeezes, it seems unlikely a major initiative to expand the program is possible, especially given the ascendance of more conservative leaders who rose to power partially on attacks of the social welfare system. Basic income, then, is unlikely to be guaranteed or universal anytime soon, yet continued successful trials indicate that when conditions are more favorable, it could become the norm.

Michael Sliwinski
Michael Sliwinski (@MoneyMike4289) is a 2011 graduate of Ohio University in Athens with a Bachelor’s in History, as well as a 2014 graduate of the University of Georgia with a Master’s in International Policy. In his free time he enjoys writing, reading, and outdoor activites, particularly basketball. Contact Michael at staff@LawStreetMedia.com.
Share:
Related ItemsAlaskaBasic IncomeFinlandGuaranteed Basic IncomemanitobaOntarioPovertyUniversal Basic IncomeWelfare