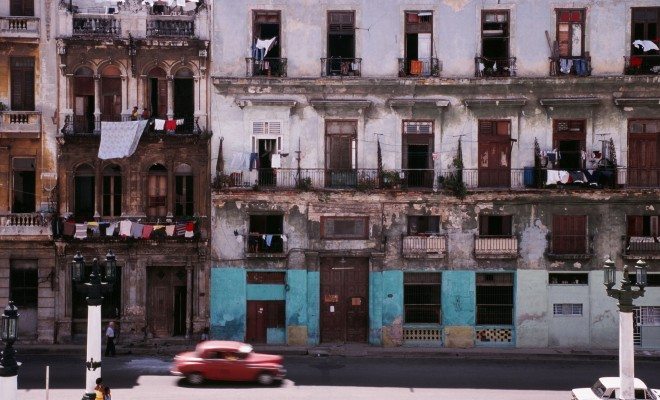 "Colors of Havana" courtesy of [Anton Novoselov via Flickr]

The New Cuba: Who is Investing in the Island?

President Obama touched down in Cuba last week, making him the first sitting president to visit the nation in eighty-eight years. As the President and the First Family toured the historic center of Havana, they likely witnessed the stunning old city filled with the vintage cars and delicious cuisine that make Cuba unique. As a result of the embargo, Cuba sometimes seems like a land forgotten by time. However, the Cuba that the Obamas are witnessing this week  is very different than the Cuba the average tourist may experience in the next ten years.  As more opportunities for investment and travel open up in Cuba, foreign investors are making moves–especially within the hospitality sector. Consider that Marriott CEO Arne Sorenson is accompanying President Obama on his visit to Cuba–Marriott may be interested in investing on the island. Read on to see which companies are investing in Cuba and why.

Starwood Hotels, the company which owns Westin, Sheraton, and W Hotels (just to name a few), made headlines by announcing that it will open three hotels in Cuba.  At the moment, all Cuban hotels are state-owned but Starwood has the financial and organizational power to build hotels that meet the state’s standards. The location of the third hotel has not been made public but the company has stated that the Hotel Inglaterra, which is owned by a Cuban state tourism company, will become one of Starwood’s Luxury Collection hotels and the Quinta Avenida, which is run by a Cuban military-run tourism group, will become a Four Points by Sheraton hotel.

The potential Starwood-Marriott merger that is currently on the table could have a major impact on how these new hotels will be built and run.  On the heels of the Starwood commitment, AirBnB has announced it will open listings on the island by April 2. AirBnB has in fact been planning for the opening of the country for some time now–last year, the company claimed the right to represent all private residences in Cuba. AirBnB’s chief executive Brian Chesky referred to Cuba as the fastest-growing country that AirBnB has ever launched in. Physical accommodation is not the only segment of the tourism sector that is expanding into Cuba: online booking website Priceline, Western Union, and Carnival cruises have all thrown their hats into the ring (Carnival will begin sailing cruises to the island in May). Multiple U.S. airlines have filed for permission to fly commercial flights into Cuba. At the moment, American citizens cannot travel to Cuba on a tourist visa but visas falling under the following twelve categories have been opened:

Travelers must provide itineraries that justify their visa, but they no longer have to apply for a formal travel license from the government. Ease of travel is drawing a steadily increasing number of Americans to the island. According to  Jose Luis Perello Cabrera, an economist at the University of Havana, there was a 36 percent increase in the number of Americans visiting Cuba between January and May of 2015 alone.

American investors for the most part are flocking to the hospitality industry but there are a handful of cases of more specific investments. Consider Alabama-based Cleber LLC, a tractor company which was the first company to receive joint approval from the Cuban government and the U.S. Department of the Treasury. Cleber LLC is looking to produce tractors in the newly built port of Mariel just outside of Havana, claiming that these tractors will deliver both a financial profit and an ethical good–improving the quality of life of Cuban farmers. Tractors are just one element of machinery that Cuban farms and factories are clamoring for and as the market continues to open, an increasing number of small businesses like Cleber LLC will be given the opportunity to sell their specialized products on the island.

American companies are not the only investors chomping at the bit to launch projects in Cuba. Venezuela has historically been Cuba’s largest trade partner but in recent years, China has been vying for that position. Cuba has long been reliant on Venezuela for oil but the regime has now turned to China for its technology and infrastructure needs.

American companies such as AT&T have projects in Cuba waiting in their pipelines but Cuban authorities have resisted American telecommunications investment. Instead, they have turned to Chinese operators such as Huawei Technology Co. Ltd., which was tasked with installing fiber-optic connections in Old Havana. Professor William M. LeoGrande of American University has said that “partly that’s a result of the fact that historically we’ve tried to use telecommunications as an avenue to undermine their government, and so consequently they really don’t trust our hardware.”  Silicon Valley tech companies are getting left behind as Huawei installs dozens of Wi-Fi hot spots around the island. Huawei has also partnered with the Cuban telecom company Etecsa to distribute smartphones, further anchoring its brand with the Cuban public.

The economic exchange between the countries has also led to Cuban efforts to break into Asian trade: Cuba’s Havana Club rum has launched major marketing campaigns targeting the Chinese market, hoping that it will be a gateway to Asia as a whole. In 2015, airlines began operating direct flights between Beijing and Havana as both Chinese investment and tourism in Cuba soared. Although Chinese investors have not paid as much attention to the hospitality sector as American companies, China’s Suntine International-Economic Trading Company has partnered with Cuba’s Cubanacan hotel group to launch a new “Hemingway Hotel”–a luxury hotel with a price tag of at least $150 million. If the Hemingway Hotel project succeeds, then Chinese corporations may commit to more hospitality projects–putting them in direct competition with companies like Starwood and AirBnB.

Although foreign investment appears to open up new opportunities for the Cuban people, it has been argued that foreign companies will only further entrench the power of Raul Castro rather than aiding the general Cuban populace. American (and other foreign) companies hiring Cuban workers will not necessarily be allowed to hire employees directly. Instead, they may only be permitted to hire people through state agencies, effectively blacklisting anybody the regime has deemed unacceptable. Foreign investors will pour their money into the regime itself rather than into the individual bank accounts of Cubans who they hire at their enterprises. Cuba is a nation with a rich cultural heritage that travelers have been drawn to for centuries but many Americans are unfamiliar with the island’s government and its approach towards controlling the population. As diplomatic relations between the U.S. and Cuba expand, American investors are trickling into the country, hoping to prepare it for a potential flood of tourists in the coming years.

While Americans seem to have gained the upper hand regarding early investment in hospitality services, Chinese and Venezuelan companies have been positioning themselves to win the contracts on Cuba’s largest infrastructure projects. Tech investment could be a battleground, as Cisco has already committed to a training institute and Google is interested in working on Cuban connectivity but Chinese investment in Cuba’s internet has already put them at a significant advantage. The swell of foreign investment in Cuba may not provide the stability and equality that optimists hope for, but it should not be dismissed outright. Allowing open commerce and investment in Cuba will allow the nation to engage in the global economy in a way that it has never before–but it is, at least at the moment, unclear who will truly benefit from this expansion.

VOX: Airbnb and American Hotels Aren’t Wasting Any Time Ppening up in Cuba

CNBC: Marriott, Starwood Team up to Take on Airbnb in New Merger

New York Magazine: Discovering Cuba, One Airbnb at a Time

Financial Times: No Flood of Investment Despite US-Cuba Thaw

NPR: U.S.-Cuba Ties Are Restored, But Most American Tourists Will Have To Wait

AP News: Stunning 36 Percent Rise in US Visits to Cuba since January

Worker’s World: U.S. Investment in Cuba: How a Little Red Tractor Jumped to Front of the Line

Jillian Sequeira
Jillian Sequeira was a member of the College of William and Mary Class of 2016, with a double major in Government and Italian. When she’s not blogging, she’s photographing graffiti around the world and worshiping at the altar of Elon Musk and all things Tesla. Contact Jillian at Staff@LawStreetMedia.com
Share:
Related ItemsAirBnBChinaChinese investmentCubaForeign InvestmentHospitalityHotelsInvestment