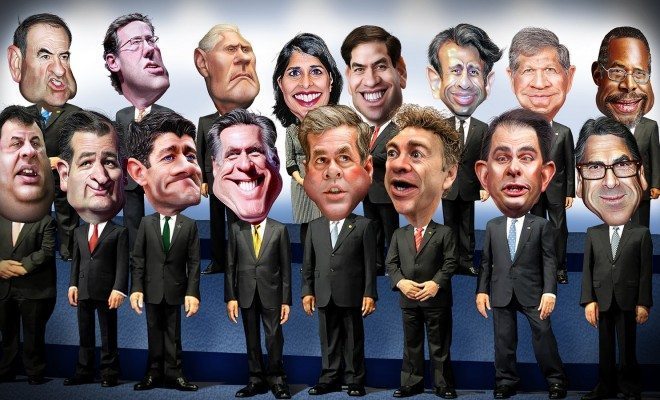 It’s only May 2015 and already the Republican field vying for the 2016 presidential nomination feels awfully crowded. In anticipation of this very crowded field, various outlets that host the presidential debates are already taking steps to limit the number of candidates who will be able to participate in the nationally televised debates. Given the notoriety and celebrity status required to win the nomination in this day and age, this could sink some candidates’ campaigns before they even really begin.

In terms of candidates who have already declared, we have Senators Ted Cruz, Rand Paul, and Marco Rubio. There’s also former Governor Mike Huckabee, Dr. Ben Carson, and former HP CEO Carly Fiorina. It’s also speculated that some combination of former Governor Jeb Bush, former Governor Rick Perry, former Senator Rick Santorum, Governor Scott Walker, Senator Lindsey Graham, Governor Chris Christie, Governor Bobby Jindal, Governor John Kasich, and business mogul Donald Trump will declare at some point relatively soon. At my count that could be well over a dozen candidates, and I’m sure there are at least a few I’m missing or who will come out of the woodwork to declare.

In light of this potentially huge field, both Fox News and CNN, who are hosting debates in August and September, respectively, have declared that they’re only going to allow the top ten candidates on stage to duke it out for the GOP nomination.

Those announcements, of course, raised plenty of questions, because there’s no good way to determine who the “top ten” candidates are before a single vote is even cast. According to Fox News, the candidates have to “place in the top ten of an average of the five most recent national polls, as recognized by Fox News.” CNN has announced that it will be using a slightly different metric:

The first ten candidates—ranked from highest to lowest in polling order from an average of all qualifying polls released between July 16 and September 10 who satisfy the criteria requirements … will be invited to participate in ‘Segment B’ of the September 16, 2015 Republican Presidential Primary Debate.

Either way, Fox and CNN are both taking steps to ensure that the candidates that they allow on stage for the debates are ones who have a fighting chance–although when considering the crowdedness of the field, this may come down to a few percentage points between candidates who make the cut and those who don’t.

With that in mind, apparently CNN has also announced that it’ll give candidates who don’t make the cut for the main debate but who are polling about 1 percent in three national polls the opportunity to speak in a different segment of the September debate.

Given the sheer craziness that was trying to watch the Republican debates in 2012 and the Democratic debates in 2008, both of which had plenty of candidates (although less than 10), it makes sense that the news outlets want to limit the amount of candidates speaking. If they were to go above ten, there would be hardly enough time for each candidate to be able to say anything useful about his or her platform. That being said, missing out on national exposure will end up hurting the lesser-known candidates, and could end up culling the field on the earlier side than past election cycles.

Anneliese Mahoney
Anneliese Mahoney is Managing Editor at Law Street and a Connecticut transplant to Washington D.C. She has a Bachelor’s degree in International Affairs from the George Washington University, and a passion for law, politics, and social issues. Contact Anneliese at amahoney@LawStreetMedia.com.
Share:
Related Items2016 Election2016 Presidential ElectionCandidateCNNDebateElection 2016Fox NewsGOPRepublican