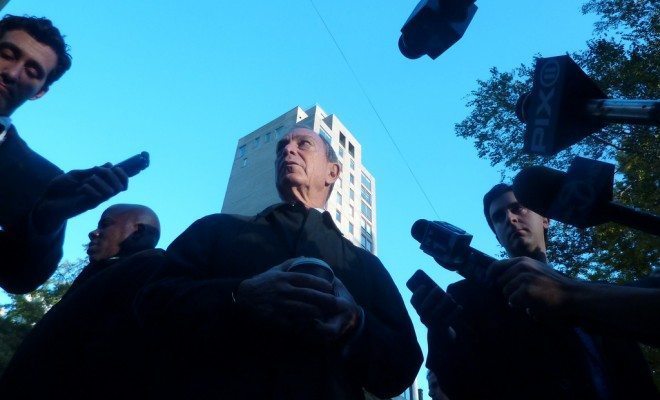 Will Michael Bloomberg Jump in the 2016 Fray?

Michael Bloomberg, former mayor of New York City, is evidently considering an independent run for President in 2016. According to sources close to the politician and media mogul, he “sees the Republican and Democratic presidential races as becoming increasingly polarized, and neither fits Bloomberg’s views.” While nothing is definite yet, the moves that Bloomberg and his people are making indicate that he is seriously considering that third-party bid.

Bloomberg’s concerns about the nominees extend to both parties–he reportedly doesn’t want to see a race that comes down to Donald Trump or Ted Cruz on the Republican side vs. Bernie Sanders on the Democratic side. Edward G. Rendell, the former Governor of Pennsylvania and a past DNC chair told the New York Times that he believes:

Mike Bloomberg for president rests on the not-impossible but somewhat unlikely circumstance of either Donald Trump or Ted Cruz versus Bernie Sanders. If Hillary wins the nomination, Hillary is mainstream enough that Mike would have no chance, and Mike’s not going to go on a suicide mission.

However, as much as he may dislike Donald Trump, Bloomberg’s campaign would take a page out of the Republican front-runners book–he would allegedly self-finance his campaign with the $37 billion he has acquired from his media businesses.

If Bloomberg were to join the race as an independent, he would be almost certain to take votes away from whoever ends up as the Democratic nominee. While Bloomberg has bounced around from party to party over his time in politics, many of his positions are significantly more attractive to Democrats than they are to Republicans. For example, he has long been a supporter of stricter gun controls, has donated money to Planned Parenthood, and worked to combat climate change. While he has also held some positions that are more moderate-right leaning, such as support for the financial services industry, it’s presumed that should he run as an independent, he’d draw voters more from the Democratic base than Republican.

Many are saying that the fact that Bloomberg is even considering a run is bad news for Hillary Clinton, who has seen her poll numbers take quite a bit of a hit in recent weeks. But, the primaries still haven’t even officially started, so there’s still quite a long road to go, and probably a while before Bloomberg would make any official moves.

Anneliese Mahoney
Anneliese Mahoney is Managing Editor at Law Street and a Connecticut transplant to Washington D.C. She has a Bachelor’s degree in International Affairs from the George Washington University, and a passion for law, politics, and social issues. Contact Anneliese at amahoney@LawStreetMedia.com.
Share:
Related Items2016Bernie SandersBloombergDemocratDonald TrumpHillary ClintonIndependentMayor BloombergMichael BloombergNew YorkRaceRepublicanTed Cruz