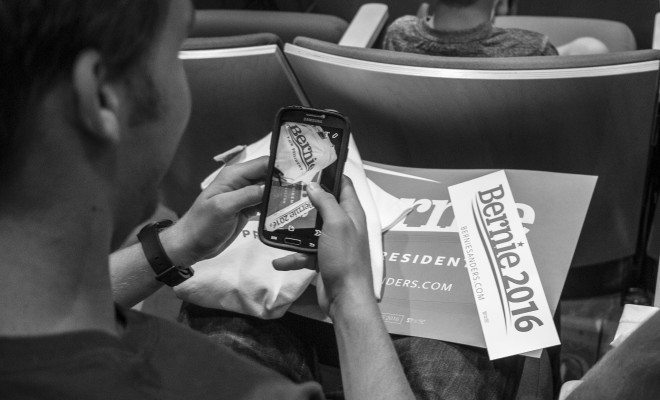 Why the Second Democratic Debate was a Loss for Bernie Sanders

On Saturday night, the three remaining Democratic candidates took to the stage for the second Democratic debate of the primary season. Secretary of State Hillary Clinton, Governor Martin O’Malley, and Senator Bernie Sanders appeared at Drake University in Des Moines, Iowa. In light of Friday night’s horrific terrorist attacks in Paris, France, the debate was shifted to focus on national security, terrorism, and foreign affairs. It was an interesting evening–in comparison to the Republican debates, which have ranged from 8-10 participants and have been full of skirmishes between the candidates–it was congenial and at times even boring. But the big takeaway is that regardless of debate performances, it probably didn’t make a difference in Senator Bernie Sander’s quest to unseat frontrunner Hillary Clinton.

Let’s start with a disclaimer: the Democratic field is down to three candidates–two of whom are arguably in contention (Sanders and Clinton) and one who, barring a miracle, is fundamentally not (O’Malley). So let’s get O’Malley out of the way now–he has no shot and while he was applauded for some strong answers Saturday night, his poll numbers are so low that even a bump wouldn’t matter much at this point. It’s way more interesting to discuss the overall showdown between Clinton and Sanders, and consider if the debate performances will benefit one or the other.

Sanders was in trouble from the start just based on the timing of the debate itself. Saturday night at 9 PM isn’t exactly a great time for a debate, particularly for the sought-after contingent of young voters. This is particularly a concern for Sanders, who has become an attractive candidate for millennials. According to a poll conducted in mid-October, among those born between 1985-1997, Bernie Sanders is at 54 percent. Hillary Clinton is at a meager 26 percent. In contrast, Clinton dominates among older voters, at 48 percent.

The debate drew in only 8.5 million viewers. While for a political event on a Saturday night that’s pretty good, it’s not good enough. It was the lowest of any of the primary debates so far, including the first Democratic one, and the four Republican debates. Twenty-four million people watched the first Republican debate; that’s almost three times as many people who tuned into Saturday night’s showdown. While the debate was technically the most watched program in its time slot, ABC’s college football game between Oklahoma and Baylor was the top program for the 18-49 age demographic. Essentially, more older people watched the Democratic debate than young people. While that’s not surprising, it is deeply problematic for Bernie Sanders, who needs to keep getting his message in front of the young people he’s proven it resonates for. To be fair, online streaming data isn’t immediately available, and that’s how I, as well as probably a bunch of other young people watched the debate. If online streaming data indicates that a big chunk of millennials watched the debate instead of doing other things on a Saturday night, I’ll stand corrected, but I’d be very, very surprised.

Multiple polls post-debate declared Clinton as the winner–and that’s just based on performance, which of course a subjective marker. But in terms of numbers, she probably won it too. Her base was more likely to watch Saturday night’s debate. If Sanders is going to have a shot at the nomination, and that’s a big “if,” he needs to continue to inspire young voters. While it’s not his fault that the debate was at a truly inconvenient time, Sanders is going to need to continue to seek out alternate ways to get his message across.

Anneliese Mahoney
Anneliese Mahoney is Managing Editor at Law Street and a Connecticut transplant to Washington D.C. She has a Bachelor’s degree in International Affairs from the George Washington University, and a passion for law, politics, and social issues. Contact Anneliese at amahoney@LawStreetMedia.com.
Share:
Related ItemsBernie SandersCBSDemocratic DebateFootballHillary ClintonMartin O'MalleyMillennials