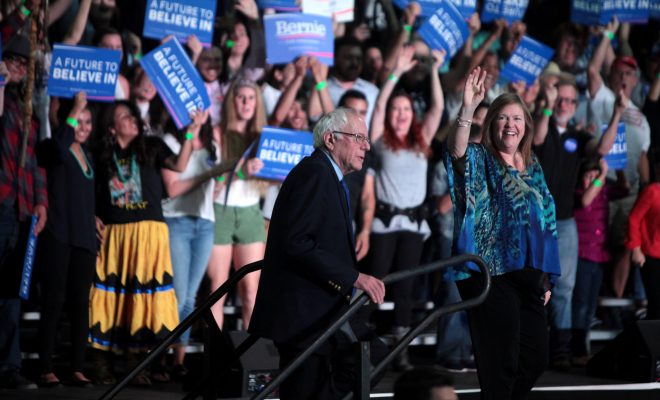 Jane Sanders Bank Fraud Investigation: What You Need to Know

Jane Sanders, the wife of former presidential candidate Sen. Bernie Sanders (I-VT), is currently under federal investigation. The probe concerns a 2010 land purchase orchestrated by Jane Sanders, who was, at the time, president of Burlington College in Burlington, Vermont. The Sanders camp contends the investigation is a political ploy to stymie Bernie Sanders’ political future. But the investigation is heating up, according to The Washington Post. Here is what else you need to know:

In 2010, Jane Sanders purchased $10 million-worth of land to build a new Burlington College campus. She promised the owner of the 33-acre property, the Roman Catholic Diocese of Burlington, that she would pay off the purchase with private donations. Jane Sanders told trustees that $2.6 million in donations had already been pledged to the college and projected a surge in enrollment in the coming year.

To finance the exchange, the college borrowed $6.7 million from the People’s United Bank. The diocese provided the college with an additional loan, expecting to be repaid based on Jane’s assurances.

Soon after the purchase was complete, the diocese realized that Jane Sanders’ promises had been largely overstated. Enrollment did not substantially increase, and the donations Sanders said had already been pledged fell well short of the $2.6 million she promised. Following an uproar from the board of trustees, Jane Sanders resigned in 2011, and the college closed in 2016.

According to David V. Dunn, a former Burlington College trustee, neither of Jane Sanders’ promises–the increased enrollment and $2.6 million in donations–were true. However, there were other management issues that contributed to her firing.

Jeff Weaver, the spokesman for Jane and Bernie Sanders, considers the investigation to be politically motivated. He said the probe was launched because of Brady Toensing, a lawyer who sent a letter to the United States Attorney’s Office for the District of Vermont in January alleging potential bank fraud.

“We request an investigation into what appears to be federal loan fraud involving the sale of the Roman Catholic Diocese of Burlington headquarters,” Toensing wrote in the letter.

“This apparent fraud resulted in as much as $2 million in losses to the Diocese and an unknown amount of loss to People’s United Bank, a federally financed financial institution,” said Toensing, who at the time was the vice chairman of the Vermont Republican Party. Toensing later became the state chairman for President Donald Trump’s presidential campaign.

Unsurprisingly, Bernie Sanders sees the investigation as little more than a political ruse. He highlighted the timing of the inquiries into his wife’s college in an interview with CNN’s Jake Tapper:

“Right in the middle of my presidential campaign–and I know this will shock the viewers–the vice chairman of the Vermont Republican Party, who happened to be Donald Trump’s campaign manager, raised this issue and initiated this investigation.”