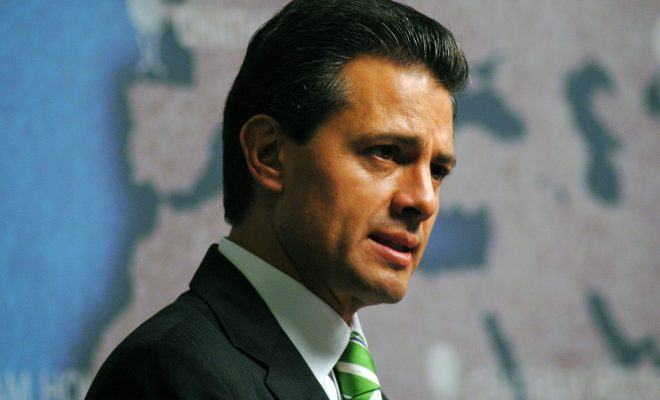 Donald Trump has announced he is going to Mexico on Wednesday to meet with President Enrique Peña Nieto only a few hours before a major immigration speech in Arizona. Last week, Peña Nieto sent out invitations to Trump and Hillary Clinton to come visit. Trump waited until the last minute to accept, and declared on Twitter Tuesday night that he looked “very much forward” to the personal meeting.

I have accepted the invitation of President Enrique Pena Nieto, of Mexico, and look very much forward to meeting him tomorrow.

But Trump’s trip to Mexico has given birth to the Twitter hashtag #TrumpsMexicoTripSayings, which makes fun of Trump’s distinctive way of speaking.

.#TrumpsMexicoTripSayings
just stopping by to check on my best employees.
no, not the rapists. those are friends.
. pic.twitter.com/YHXB5D2pdD

"I know walls. Walls love me. I build the best walls. Everyone agrees. They're terrific." #TrumpsMexicoTripSayings pic.twitter.com/tjdNco93d1

The visit to Mexico may come as a surprise given Trump’s previous statements about Mexicans and Latinos–he has accused them of being rapists and killers who are bringing crime and drugs into the U.S., he kicked a Hispanic journalist out of a news conference, and he wants to build a wall and have Mexico pay for it.

So, maybe this trip is an attempt to win over some Latino votes as Trump’s poll numbers are going down. Trump’s stance on immigration has been questioned during the past couple of weeks, as he has indicated he might be open to a more lenient immigration policy than he has previously stated.

But that doesn’t necessarily go far in Mexico. Former President Vicente Fox apologized on behalf of the country in an interview with CNN, saying that this invitation is a very opportunistic move that he hopes both the U.S. and Mexican public can see through. He said that Trump cannot undo the harm of his offensive remarks about Mexicans and Muslims that have made him so unpopular in many parts of the world.

There was even a Twitter argument going on between Trump and Fox on Wednesday morning. Trump reminded Fox that he also invited him to visit Mexico earlier this year, after apologizing for saying Mexico would not pay for that “f—–g wall”.

Former President Vicente Fox, who is railing against my visit to Mexico today, also invited me when he apologized for using the "f bomb."

Fox replied that his invitation only stood if Trump was willing to apologize to the Mexican people.

@realDonaldTrump, I invited you to come and apologize to all Mexicans. Stop lying! Mexico is not yours to play with, show some respect.

Writer Andy Borowitz suggested in a satire article in the New Yorker that Obama would pay $5 billion for Mexico to keep Trump.

But it seems like the Mexican politicians would rather only have a quick visit.

Emma Von Zeipel
Emma Von Zeipel is a staff writer at Law Street Media. She is originally from one of the islands of Stockholm, Sweden. After working for Democratic Voice of Burma in Thailand, she ended up in New York City. She has a BA in journalism from Stockholm University and is passionate about human rights, good books, horses, and European chocolate. Contact Emma at EVonZeipel@LawStreetMedia.com.
Share:
Related Items#TrumpsMexicoTripSayingsDonald TrumpHashtagMexicoPresident Enrique Pena NietoTwitterVicente FoxWall