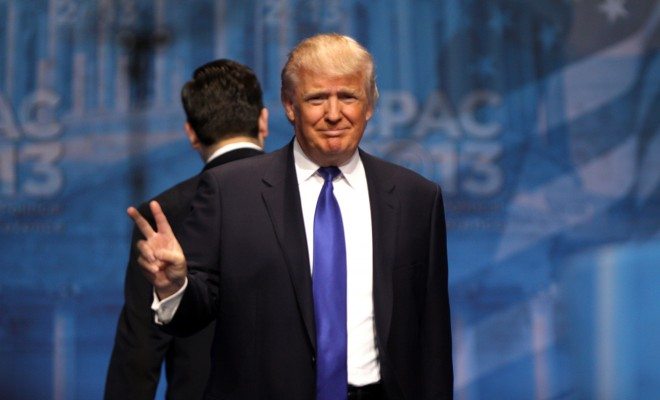 Trump Scoffs at Campaign Aides’ Attempts to Turn Him ‘Presidential’

Early on in his quest to preside over the most powerful nation on earth, questions were raised about Donald Trump’s temperament. The businessman swore he had a “presidential” side to him that would reveal itself as the race moved on. On Monday, Paul Manafort, Trump’s newly hired delegate guru, experienced the difficulties of trying to summon his new boss’s more polished side.

According to Politico, Trump is uncomfortable with Manafort’s recent directives aimed at cleaning up his speaking style, even urging him to use a teleprompter in lieu of his more “wing it” inclinations.

There have been signs of late that Manafort is doing more than managing Trump’s delegate game.

Last week, at a gathering of the Republican National Committee in Florida, Manafort let slip a statement that implied Trump is simply “projecting an image” at the moment:

“The part that he’s been playing is evolving into the part that now you’ve been expecting, but he wasn’t ready for, because he had first to complete the first phase… You’ll start to see more depth of the person, the real person. You’ll see a real different way,” Manafort told AP reporters who attended the gathering at a resort in Hollywood, Florida.

Trump has cautioned Manafort, who he thinks is overstepping his role by urging him to go about things in a more “presidential” manner, something Trump is not quite ready to do.

Trump has been avoiding the Sunday morning talk shows at Manafort’s request (the instances Trump often slips up, Manafort said), though Manafort himself has been making more appearances on television of late. Trump, who relishes screen time and has bragged about his ability to procure free media coverage, is suspicious of Manafort’s recent media time, sources told Politico.

The beneficiary of the latest Trump camp tension: Corey Lewandowski, Trump’s campaign manager who has been privately dueling with Manafort since he was hired in late March. Just last month Lewandowski was charged with battery after a video implicated him in forcefully grabbing Breitbart reporter Michelle Fields by the wrist at a campaign event in Jupiter, Florida. The charges were dropped and Trump, who was under pressure to relieve his longtime friend of his duties, doubled down and reiterated his support for his campaign manager.

And because of recent tension between Manafort and Trump, it seems Lewandowski will be granted even more sway moving forward. Whether the team can get on the same page as the fight for delegates drags on throughout the summer remains to be seen.

Alec Siegel
Alec Siegel is a staff writer at Law Street Media. When he’s not working at Law Street he’s either cooking a mediocre tofu dish or enjoying a run in the woods. His passions include: gooey chocolate chips, black coffee, mountains, the Animal Kingdom in general, and John Lennon. Baklava is his achilles heel. Contact Alec at ASiegel@LawStreetMedia.com.
Share:
Related ItemsContested ConventionDonald TrumpPaul ManafortRepublican PartyRNC