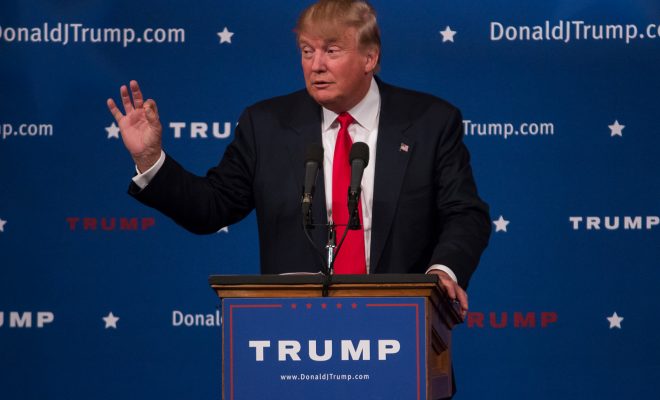 Don’t Worry, Trump Will Accept the Outcome of the Election…If He Wins

Good news, everyone! We don’t have to worry about Trump contesting the election and claiming it was rigged…if he wins. Here’s a video:

JUST IN: Trump: “I will totally accept the results of this great and historic presidential election… if I win” https://t.co/4z453rVzqK

This speech from Trump was a follow up to last night’s debate, when Trump was asked if he would respect the outcome of the election. He said: “I will tell you at the time,” and “I’ll keep you in suspense, OK?” Trump has been claiming the election is rigged for a while now (check out fellow Law Street Alec Siegel’s article on the distrust Trump has been sowing among the electorate for more on that.) But this ambiguity about whether or not he’ll accept the election results if he loses seems to go a step further.

There’s more to this than just a narcissistic celebrity who, by almost every definition, is a sore loser. Refusing to accept the democratic outcome of an election is deeply problematic–and can undermine our political system. That’s not to say that when there is corruption or election fraud we shouldn’t be vigilant, but rather to say that when we know that there’s not voter fraud, it’s irresponsible to keep encouraging the narrative that there is. Shaun Bowler, who teaches political science at the University of California Riverside wrote for Vox:

Donald Trump is a candidate who seems to want to claim that, whenever he loses, it is not because more people voted against him than for him, but because the election is rigged. From this assumption arises his frequent call for ‘poll watchers’ with no legal authority and questionable roles. (Will they intimidate voters? Will they interfere with the process?) The longer-term consequence will be the same as in Mexico, Ukraine and elsewhere: They will undermine voter support for the system. The difference is that in the US, the claims have very little basis in actual levels of election fraud.

Donald Trump, by constantly positing that this is a rigged election, and saying he’s not sure that he’ll accept the outcome of the vote, is encouraging even more mistrust in our democracy than there already is. In fact, Trump’s claims are so outrageous that a lot of Republicans are speaking out against them. Both Senator Marco Rubio (R-Florida) and Senator Pat Toomey (R-Pennsylvania) refuted the idea that the election is rigged last night, as did Senator Lindsey Graham:

My thoughts on a ‘rigged’ presidential election. pic.twitter.com/075n83NXMH

This election is not rigged, and it’s irresponsible to say that it is. Faith in the democratic process is one of America’s greatest strengths, and it’s more important than the outcome of any election.

Clinton’s chances to win on November 8 are looking even more promising, given recent polling results. Whether Trump will accept that reality remains to be seen.

Anneliese Mahoney
Anneliese Mahoney is Managing Editor at Law Street and a Connecticut transplant to Washington D.C. She has a Bachelor’s degree in International Affairs from the George Washington University, and a passion for law, politics, and social issues. Contact Anneliese at amahoney@LawStreetMedia.com.
Share:
Related ItemsDonald TrumpElectionsHillary ClintonLindsey GrahamMarco RubioNikki HaleyPat ToomeyRigged