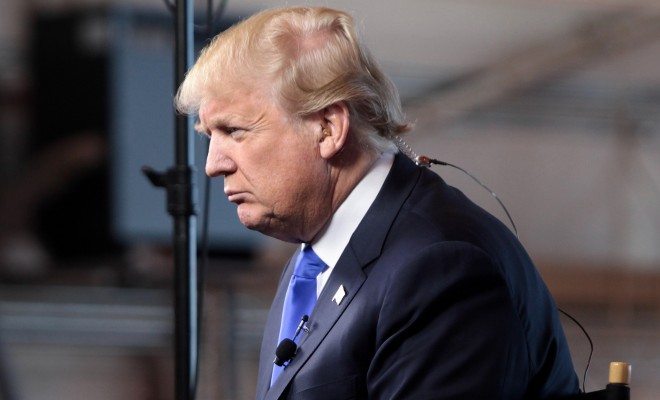 Trump Might Not be a Gracious Loser After All

When Donald Trump finished second in Iowa, no one knew what to expect as he reacted. Would he accept the democratic outcome of the election? Would he lash out at the people of Iowa, which he’s momentarily done in the past? By the end of the night, everyone’s questions were answered when Trump took the stage. Surprising many, Trump’s reaction came across, well, classy. But that wasn’t his last word on the subject; after he had a little more time it seems like he changed his mind.

Here’s his speech in Iowa:

But Trump’s good will and acceptance didn’t last long. Naturally, Trump’s first inclination was to go after the media. After tweeting about his great experience in Iowa and how he was satisfied with the outcome, he tweeted, “The media has not covered my long-shot great finish in Iowa fairly. Brought in record voters and got second highest vote total in history!” To be fair, he is right that turnout was very high on Monday–almost 40 percent higher than in 2012–and that he fared best among first-time voters.

Anybody who watched all of Ted Cruz’s far too long, rambling, overly flamboyant speech last nite would say that was his Howard Dean moment!

On Wednesday, Trump began an all-out assault on Cruz, accusing him of cheating and stealing the election.

Ted Cruz didn’t win Iowa, he stole it. That is why all of the polls were so wrong and why he got far more votes than anticipated. Bad!

During primetime of the Iowa Caucus, Cruz put out a release that @RealBenCarson was quitting the race, and to caucus (or vote) for Cruz. — Donald J. Trump (@realDonaldTrump) February 3, 2016

Many people voted for Cruz over Carson because of this Cruz fraud. Also, Cruz sent out a VOTER VIOLATION certificate to thousands of voters.

And finally, Cruz strongly told thousands of caucusgoers (voters) that Trump was strongly in favor of ObamaCare and “choice” – a total lie!

Believe it or not, Trump again has a couple fair points. Cruz was responsible for a legitimately nefarious direct mailer that his campaign sent out to essentially scare people into voting. Many Iowans received a letter from the Cruz campaign with their voting “scores” (which aren’t a real thing) as well as the scores of their neighbors. This strategy is based on a piece of political science research about direct mail and voter turnout, but the Cruz campaign took it to a new extreme. The letters were intended to pressure voters to turn out to improve their “voting score” and it even alleged that the recipients committed some sort of “voting violation.”

The Iowa Secretary of State quickly denounced the mailers, issuing a statement saying,

Today I was shown a piece of literature from the Cruz for President campaign that misrepresents the role of my office, and worse, misrepresents Iowa election law. Accusing citizens of Iowa of a ‘voting violation’ based on Iowa Caucus participation, or lack thereof, is false representation of an official act. There is no such thing as an election violation related to frequency of voting. Any insinuation or statement to the contrary is wrong and I believe it is not in keeping in the spirit of the Iowa Caucuses.

He went on to note that caucuses are not even conducted by the state government, rather they are under the control of political parties. It is also important to note, however, that Cruz is not alone in his use of extremely misleading mailers, Marco Rubio sent a equally dubious letter to voters as well.

Trump also criticized Cruz’s response to news that Ben Carson was not going to travel directly to New Hampshire after the caucuses. The Carson campaign alleged that Cruz spun the news as if Carson was dropping out of the race in an effort to change the minds of caucus-goers. Cruz eventually apologized saying that spreading the news was fair game, but that a clarification should have been sent out when it was clear that Carson was not leaving the race.

While Trump’s criticism of Cruz has some surprisingly reasonable points, it’s unlikely that his tactics shifted the balance of the elections. As the Washington Post points out, Carson actually outperformed polling predictions and Bloomberg notes that Cruz sent the mailers out to about 3,000 potential voters yet won by more than 6,000 votes.  Ultimately, Trump went so far as to call for a new election, or at least for the existing results to be invalidated.

Based on the fraud committed by Senator Ted Cruz during the Iowa Caucus, either a new election should take place or Cruz results nullified. — Donald J. Trump (@realDonaldTrump) February 3, 2016

Over the course of a few days, Donald Trump went from congratulating Ted Cruz on his win to outright calling him a liar and a cheater. But then again, did we really expect anything else?