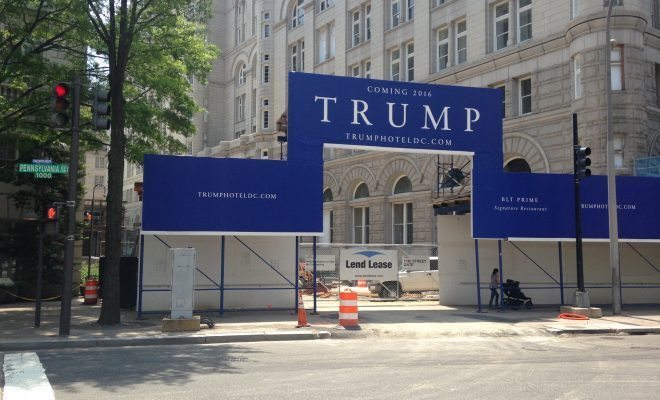 The Trump Hotel: It’s Not a Name They’re Working For, It’s a Living

Under a scalding summer sun, a small group of men–all wearing hard hats and neon yellow vests, many with forearms covered in tattoos–stream out of a door that separates two vastly different worlds. On the inside: the fenced-in private property of the Trump International Hotel D.C., Donald Trump’s newest real estate venture in the heart of the nation’s capital. Outside: a lunch break, bustling Pennsylvania Avenue, and the anonymity of being any other construction worker, unbeknownst to strangers as the guys working on a Trump property. The $200 million Trump hotel–with its 263 rooms, BLT Prime restaurant, and renovated space within the 19th century Old Post Office Pavilion–officially began taking reservations earlier this week.

Dividing lines: Trump is coming to the Capital one way or another. [Image courtesy of Alec Siegel for Law Street]

Not all media coverage is helpful, it seems, when trying to rent out hotel rooms.

Back on Pennsylvania Avenue, the men are hungry. Some carry lunch bags and stand under the shade of a tree, cigarettes dangling from their mouths as they quietly scan their surroundings.

“What do you want to know?” one man tiredly answers in response to a question from Law Street. “It’s money.”

They were tired of answering questions about what it’s like to work on a Trump property. After all, the billionaire has said some disparaging things about Hispanics, who make up a sizable slice of the property’s workforce.

“I love him!” another man chuckled, in reference to his employer whose name appears in giant font on giant buildings in major metropolises around the world. (And in smaller font on ballots now, too).

As Trump locked up the delegates needed to become the Republican party’s presidential nomination, the men who have been toiling away at his hotel for years barely acknowledge the namesake of the building that’s about to start welcoming guests any more. They put on their hardhats and get to work. After all, “it’s money.”

Alec Siegel
Alec Siegel is a staff writer at Law Street Media. When he’s not working at Law Street he’s either cooking a mediocre tofu dish or enjoying a run in the woods. His passions include: gooey chocolate chips, black coffee, mountains, the Animal Kingdom in general, and John Lennon. Baklava is his achilles heel. Contact Alec at ASiegel@LawStreetMedia.com.
Share:
Related ItemsDonald TrumpHotelsTourismTrump HotelWashington DC