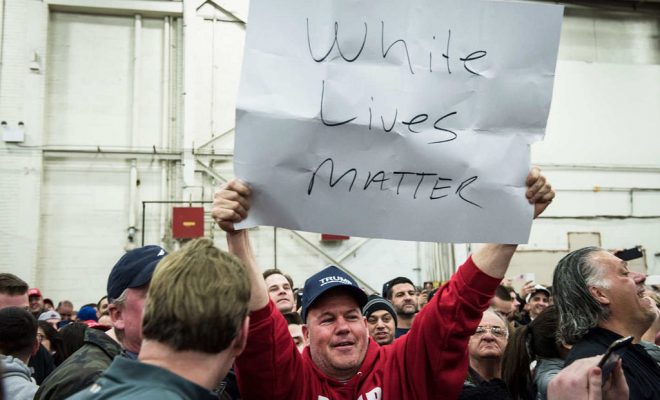 The “Trump Effect” is Impacting Kids

Even if Donald Trump is not successful in November, his legacy of questionable rhetoric will live on in the lives of young American children.

Educators around the country have been sharing their experiences with students participating in a wide range of discriminatory actions, even students as young as third graders. These actions range anywhere from students telling others that they will be deported to quoting Trump’s infamous “Build the wall!” phrase to predominantly Hispanic groups of kids.

The Southern Poverty Law Center came out with a comprehensive report in April detailing what it calls the “Trump Effect.”

It’s producing an alarming level of fear and anxiety among children of color and inflaming racial and ethnic tensions in the classroom. Many students worry about being deported

Other students have been emboldened by the divisive, often juvenile rhetoric in the campaign. Teachers have noted an increase in bullying, harassment and intimidation of students whose races, religions or nationalities have been the verbal targets of candidates on the campaign trail.

In a statement, the National Education Association said, “Since Trump entered the race for president last year, educators have witnessed a steady increase in bullying and harassing behavior that mirrors his words and actions on the campaign trail.”

In Fairfax County, Virginia, a mom took to Facebook to talk about her third grade child’s experience at school.

I just got a call from my son’s teacher giving me a heads up that two of his classmates decided to point out the ‘immigrants’ in the class who would be sent ‘home’ when Trump becomes president. They singled him out and were pointing and laughing at him as one who would have to leave because of the color of his skin. In 3rd grade . . . in Fairfax County . . . in 2016!

Her claim was confirmed by Fairfax County school officials, according to the Washington Post, and they are working to address the situation.

This newfound freedom to express pent up bigotry has been shown by adults at Trump rallies screaming at peaceful protesters and minorities. It is also shown by Trump himself, who can often be heard shouting “Get ’em out!” or singling out minorities in the audience at his events. And now it is bleeding into schools. The SPLC identified many cases of hateful speech directed at students, like a teacher’s report of a fifth-grader saying “that he was supporting Donald Trump because he was going to kill all of the Muslims if he became president!” Additionally, a Latino kindergarten student reportedly asked his teacher if the wall has been built yet because his classmates have told him that he will be deported and trapped behind it.

These instances have prompted the NEA to launch an ad campaign against Trump, particularly focusing on his role in the discrimination and bullying of students in schools around the country.

While kids may not be watching all of the debates, or even closely following the campaigns, this has shown that Trump’s rhetoric is having an impact on the way America’s kids treat one another.

Julia Bryant
Julia Bryant is an Editorial Senior Fellow at Law Street from Howard County, Maryland. She is a junior at the University of Maryland, College Park, pursuing a Bachelor’s degree in Journalism and Economics. You can contact Julia at JBryant@LawStreetMedia.com.
Share:
Related ItemsChildrenDonald TrumpEducationHate SpeechSPLC