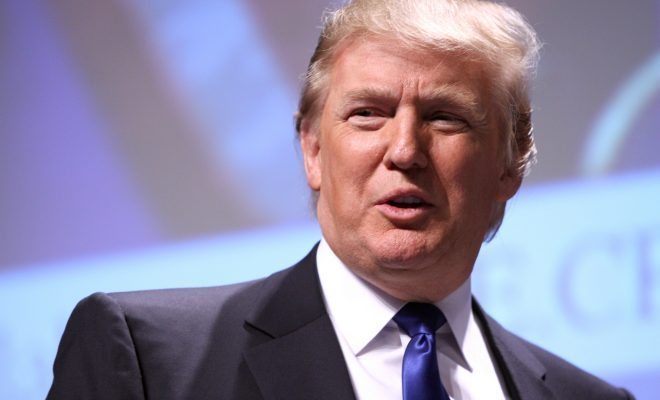 Donald Trump has many talents: amassing large sums of money, ostensibly writing checks to charities, and provoking confrontations with the media. On Tuesday, at Trump Tower in New York, the presumptive Republican presidential nominee managed to show off all three of those skills in a 40-minute televised speech.

Trump said that he raised $5.6 million during a fundraiser for veterans held in January. He also rattled off the names of the charities that were presented donations from that chunk of change, after he received pressure from the media to reveal where the money raised ended up going. And he also responded to that pressure, spending a bulk of the speech deriding the media as being “unbelievably dishonest” and singling out ABC News’s Tom Llamas as a “sleaze.”

“But what I don’t want is when I raise millions of dollars, have people say, like this sleazy guy right over here from ABC,” Trump said, skirting eye contact with Llamas, but aggressively pointing at him while squinting into the cameras. “He’s a sleaze in my book. You’re a sleaze because you know the facts and you know the facts well.”

The speech was a response to mounting pressure from the press about the particulars of the veterans’ fundraiser, which Trump held in lieu of attending a Fox News debate. The reporters’ questions were simple: how much money was raised, and to whom was it donated?

The confusion about the amount of money that was raised stemmed from contradictory statements by Trump and his campaign manager, Corey Lewandowski. Trump initially announced the event’s haul as being $6 million; Lewandowski told The Washington Post it was $4.5 million. On Tuesday, the real estate mogul cleared up the foggy figure, pinpointing the amount raised as $5.6 million and rising.

He explained the lengthy donation process as a result of making sure the charities poised to receive donations were properly vetted. All of the checks have been sent, he said, save for one to the Project for Patriots, a veteran housing group based in Sioux City, Iowa.

The largest of Trump’s contributions was made to the Marine Corps Law Enforcement Foundation for a purported amount of $1.1 million. A representative told Law Street: “Mr. Trump sent us a check last week for a million dollars.”

Whether that check was signed and sent amid the increased media attention thrust on the issue or after a drawn out vetting process is unclear. But Trump prefers his donations to fly under the radar, a shockingly different philosophy than how he has run his presidential campaign thus far: “I could have asked all these groups to come here and I didn’t want to do that. I’m not looking for credit.”

Alec Siegel
Alec Siegel is a staff writer at Law Street Media. When he’s not working at Law Street he’s either cooking a mediocre tofu dish or enjoying a run in the woods. His passions include: gooey chocolate chips, black coffee, mountains, the Animal Kingdom in general, and John Lennon. Baklava is his achilles heel. Contact Alec at ASiegel@LawStreetMedia.com.
Share:
Related ItemsDonald TrumpFox NewsGOPJournalistsMediaRepublicanVeterans