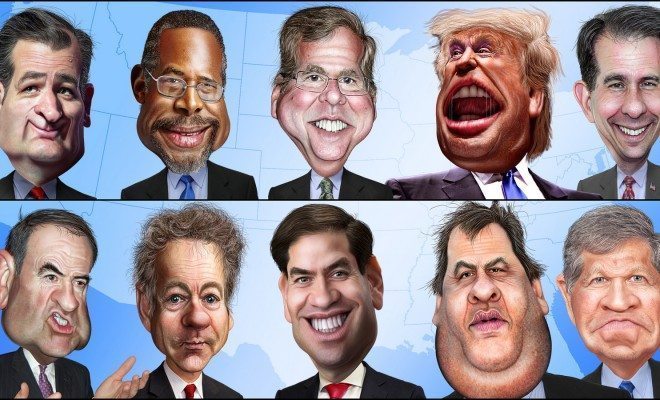 On Thursday night, the top ten Republican presidential candidates gathered in Cleveland, Ohio to duke it out on stage for the GOP nomination during the first primary debate of the year. Candidates were asked questions on a wide range of topics, from what they believe is the best approach to combat ISIL in the Middle East, to whether or not God has influenced their decisions to run for President. The panel of men, 90 percent of whom are white, debated women’s health care issues as well as the #BlackLivesMatter movement, and argued about who among them was the most average, the most American, and who hates Hillary Clinton the most. The riveting debate had hundreds of quotable moments, but here are the top ten quotes, one for each of the presidential hopefuls, in the order of the candidates’ standings in the polls.

1. Donald Trump: “If it weren’t for me you wouldn’t even be talking about illegal immigration.”

2. Jeb Bush: “They called me Veto Corleone. Because I vetoed 2,500 separate line-items in the budget.”

3. Scott Walker: “I defunded Planned Parenthood more than four years ago, long before any of these videos came out…”

Scott Walker: destroying women’s health centers before it was cool.

4. Ben Carson: “I’m the only one to separate Siamese twins.”

So if you ever elect a Siamese twin to public office, Carson can help to make your vote count twice.

5. Mike Huckabee: “The military is not a social experiment, the military does two things: kill people and break things.”

Rafael Edward “Ted” Cruz is the chosen one by divine right.

7. Rand Paul (to Chris Christie): “I don’t trust President Obama with our records. I know you gave him a big hug, and if you want to give him a big hug again, go right ahead.”

Don’t ever think we don’t notice all of your awkward hugs, Christie.

8. Marco Rubio: “Well, first, let me say I think God has blessed us. He has blessed the Republican Party with some very good candidates. The Democrats can’t even find one.”

Velma might find her glasses before the Democrats can find a good candidate, #AmIRight Rubio? High five!

9. Chris Christie (in response to Rand Paul wanting to get warrants before tapping into Americans’ phones and emails): “Listen, senator, you know, when you’re sitting in a subcommittee, just blowing hot air, you can say things like this.”

Look at all of these hot air balloons emanating from Cleveland during the debate!

10. John Kasich: “I’m an old-fashioned person here, and I happen to believe in traditional marriage…. And guess what, I just went to a wedding of a friend of mine who happens to be gay.”

Jennie Burger  and Maurin Mwombela also contributed to this story.