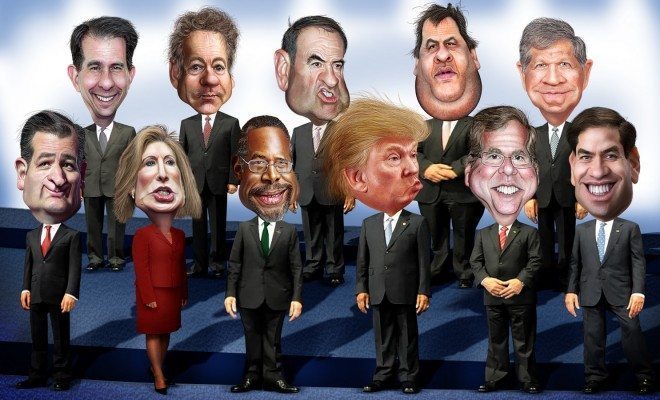 The second Republican primary debate of the year was aired last night by CNN and took place at the Reagan Library in Simi Valley, California. It was a three hour debate that left me with more questions than answers–for example, did they really all go that entire stretch without having to use the bathroom? But, tradition dictates that we boil down those three hours into some gifable snapshots, so without further ado, check out the top ten moments from the second Republican debate.

10. Mike Huckabee Appealed to Millennials with a Reference from the ’80s

Mike Huckabee referred to the Republican field as the “A Team” and decided that Donald Trump was Mr. T, saying:

I think we are in fact The A-Team. We have some remarkable people. We even have our own Mr. T, who doesn’t mind saying about others, ‘you’re cool.’

Pop culture references are a great way to appeal to the masses–and if he had picked something less than 30 years old (we’re not counting the horrible 2010 remake) it might have been successful.

9. Marco Rubio Made a Fun Reference

One of Marco Rubio’s early introductions to the national stage was when he gave the Republican response to the State of the Union back in 2013. During the speech he took a fantastically awkward sip of water:

But last night, Rubio paid homage to that really awkward moment by bringing his own water to the debate. It was a sweet and dad-joke like, but I’m not sure how much of a splash it made.

Trump, on immigration: “First of all, I want to build a wall-a wall that works. We have a lot bad dudes, from outside, in this country.” So eloquently put, Trump, although I do have to admit “bad dudes” is a bit more PC than calling swarths of the population “rapists.”

Carly Fiorina went on a weird, grisly rant about Planned Parenthood that would have been strategically powerful if it was in any way true. She stated–presumably in reference to the much-edited Planned Parenthood hit videos created by the Center for Medical Progress:

I dare Hillary Clinton, Barack Obama to watch these tapes. Watch a fully formed fetus on the table, its heart beating, its legs kicking, while someone says we have to keep it alive to harvest its brain.

The videos were disturbing to be sure, even though they were patently fiction. But at no point did those videos even come to close to portraying a fully formed fetus kicking its legs–Fiorina at this point was over-exaggerating exaggerations in an incredibly upsetting way. It’s one thing to be anti-choice, it’s another thing altogether to use lies and fear-mongering to prove your point.

6. Everyone Got Handsy with Donald Trump

Donald Trump was flanked on stage by Ben Carson and Jeb Bush, and at various points he exchanged really awkward high fives/handshakes with each of them. First was Ben Carson, who was very reluctant to get involved in the entire situation:

But Jeb Bush got a little too enthusiastic, and actually appeared to make Trump flinch:

Lindsey Graham had my favorite quote of the earlier happy hour debate, which featured the candidates who aren’t polling well enough to make it to the main stage. Graham, who has his priorities in order, stated: “That’s the first thing I’m going to do as president. We’re going to drink more.”

He was referring to Ronald Reagan’s tradition of drinks with Speaker of the House Tip O’Neill, but it still makes for an awesome one-liner, and I wholeheartedly approve.

4. Chris Christie Gets Fed Up

Donald Trump and Carly Fiorina got into a spat back-and-forth about their business records, and Christie got really damn tired of listening to it. He eventually said:

The fact is that we don’t want to hear about your careers. Back and forth and volleying back and forth about who did well and who did poorly. You’re both successful people. Congratulations. You know who is not successful? The middle class in this country who’s getting plowed over by Barack Obama and Hillary Clinton. Let’s start talking about those issues tonight and stop this childish back and forth between the two of you.

While I’m normally not a Christie fan, and I don’t agree with the claims in his comment, here’s some well-deserved applause for shutting up that annoying Trump and Fiorina spat:

Jeb Bush attempted to get some street cred in the lamest way possible–by admitting he had smoked  marijuana 40 years ago and his mom doesn’t approve:

So, 40 years ago, I smoked marijuana, and I admit it. I’m sure that other people might have done it and may not want to say it in front of 25 million people. My mom’s not happy that I just did.

You can watch this one yourself:

Ok, now we actually do have a bad ass over here.

1. Some Really Lame Answers to the “Which Women You’d Put on the $10 Bill Question”

As a fun, easy question toward the end, the moderators asked each of the debaters “Which woman would you put on the $10 bill?” Some answers were fine–Susan B. Anthony,  Rosa Parks, Clara Barton, and Abigail Adams are all admirable American women. But some of them were flat-out ridiculous. For example, three of the candidates–Mike Huckabee, Donald Trump, and Ben Carson–all cited female family members. Huckabee chose his wife, Donald Trump chose his daughter, and Ben Carson named his mother. While those are nice answers and may have been good responses to “who inspires you,” they’re also total cop-outs and a bit insulting. Women have done so many great things for this country and none are included on our paper currency–yet three of the eleven candidates couldn’t even name one.

Then, Jeb Bush gave arguably the weirdest answer all night–put Margaret Thatcher on the $10 bill. Alright Jeb Bush, please do remember that if you want a fighting chance, some American women will have to vote for you. Although at this point, I haven’t the foggiest why we would.