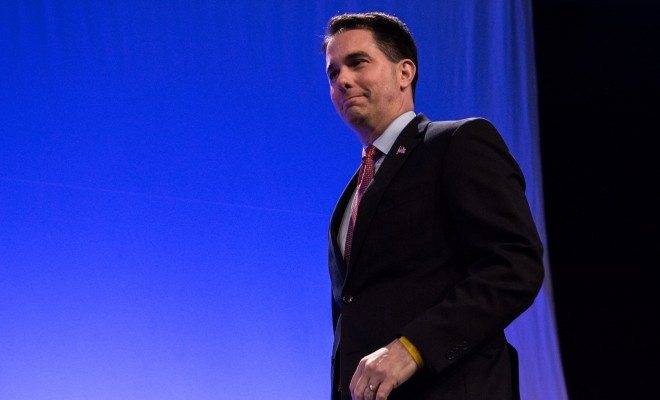 Scott Walker has officially dropped out of the race to become the 2016 Republican Presidential nominee. In such a crowded field, it’s not surprising that the herd is starting to thin itself, at least a little bit. But what is surprising is the reasoning that Walker gave–his announcement contained what was clearly a not-so-veiled jab against frontrunner Donald Trump.

Walker’s brief, but powerful, statement is below:

He began with comments about Ronald Reagan’s optimism, a characteristic he noted was lacking from the stage at the debate last Wednesday, which it just so happens was hosted at the Ronald Reagan presidential library in California. Walker parlayed that statement about lack of optimism into an indictment on how the primary race has been progressing so far, and then his announcement that he will be suspending his campaign.

Today, I believe that I am being called to lead by helping to clear the field in this race so that a positive, conservative message can rise to the top of the field. With this in mind, I will suspend my campaign immediately.

I encourage other Republican presidential candidates to consider doing the same so that the voters can focus on a limited number of candidates who can offer a positive, conservative alternative to the current front-runner. This is fundamentally important to the future of our party, and, more important, the future of the country.

The “current front-runner” is really the crucial part here–Walker is clearly referencing business mogul Donald Trump, who soared to the front of the polls despite his consistently racist, sexist, petty, and inappropriate rhetoric.

This sudden burst of patriotism and a desire to fight Trump obviously isn’t the only reason that Walker is dropping out–this isn’t a purely altruistic move. Walker burst onto the scene as a potential frontrunner when he declared his candidacy this summer, but quickly stagnated after a lukewarm performance in the first debate, and hasn’t done much to stand out since then. In fact, dropping out of the race is by far the most interesting and news-worthy thing that Walker has done since he declared his presidency. Given Scott’s stagnating campaign, money was apparently slow coming in, and his campaign allegedly was having a hard time paying his bills. There were also allegations that his campaign wasn’t built up properly, or was mismanaged.

Most recently, there are rumors that Walker’s campaign is coming to an end as a result of some sort of scandalous story that’s due to break in the next few days. Buzzfeed has claimed that there’s a rumor being passed around by top donors about Walker’s campaign manager, Rick Wiley, but did not explain what the rumor concerned. A former campaign worker, Liz Mair, has mentioned the possibility of a scandal, but what it could be about is still very much unknown.

So, why exactly Walker dropped out is incredibly unclear, but he did choose a monumental and effective way to do so. While he probably could have lasted a little while longer, dropping out when Trump is still in the lead by quite a bit gave a powerful credence to his comments. Given that Walker wasn’t polling particularly well, who knows where his share of the voters will end up, but he certainly made some pretty powerful points about coalescing against a candidate who can take down Trump.

Anneliese Mahoney
Anneliese Mahoney is Managing Editor at Law Street and a Connecticut transplant to Washington D.C. She has a Bachelor’s degree in International Affairs from the George Washington University, and a passion for law, politics, and social issues. Contact Anneliese at amahoney@LawStreetMedia.com.
Share:
Related Items2016Donald TrumpPrimariesRepublicanRepublican PrimariesRepublican RaceScott Walker