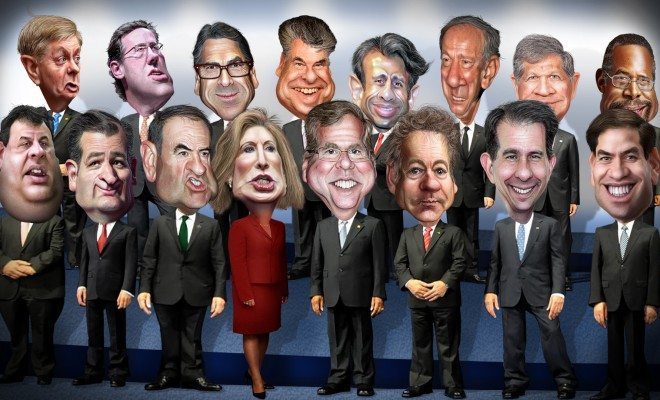 Say What? Top Ten Weirdest Quotes from the Presidential Hopefuls So Far

This election season has been one of the most controversial and surprising in recent history, as many unqualified candidates with slim chances have entered the race. There’s billionaires, CEOs, brain surgeons, and former governors all battling for the nominations.  With 20 or so candidates currently in the race for the White House, there have been some bizarre and hilarious comments. From campaign ads to presidential announcements, these are the ten weirdest quotes from the presidential hopefuls so far.

10. In Bobby Jindal’s campaign ad, he tells his children that they are the first to know that he will be running for president and they are not allowed to tell their friends. He offers them a reward if they can refrain from telling their friends, saying: “Maybe if you behave you might get a chance to go back to Iowa.”

Obviously Iowa is more of a party place than I knew. IOWA! IOWA!

9. In an exclusive interview with CNN in Iowa, Hilary Clinton was asked about her response to people who don’t believe she is a trustworthy candidate. The Hillz responded: “People should and do trust me.”

But what she forgot is that people shouldn’t and don’t trust her.

8. In his presidential announcement, Lincoln Chafee stated he was a farrier after college–which is a craftsman that puts shoes on horses. He then followed that statement by saying: “After college I worked on the horse race track for 7 years.”

Last time I checked, horse knowledge wasn’t a requirement to be president.

7. In a similar vein, during his presidential announcement, Rick Perry shared his childhood stories about his life growing up in rural Texas and his attendance at Texas A&M. He then talked about his studies in college, stating, “I got my degree in Animal Science from Texas A&M.”

America: Rick Perry is highly qualified and begging for your votes.

6.  Mr. Trump, one of the most surprising candidates of this year, finally entered the race on June 16 after weeks of speculation. While his campaign speech was poorly written, and he was likely unprepared, he stunned the American people with his absurd comments about Mexican immigrants. Following those comments, he stated that he was using his own money to run and he did not need lobbyist or PAC money saying, “I’m really rich.”

If only this were a legitimate requirement for being president, the Donald might have a chance.

5. In a campaign ad, Rick Perry stated a number of reasons why he is the best choice for president. His campaign ad strives to display Rick’s life as a public servant, showing pictures from when he served in the military and from when he was governor of Texas. He closed his campaign ad by saying, “we must do right and risk the consequences.”

Not even your custom rap-country theme song can get you out of this one, Rick.

4. In his presidential announcement, Lincoln Chafee said he had a bold, worldly idea, stating: “Let’s join the rest of the world and go metric.”

Lincoln, you have officially blown my mind…and not in a good way.

3. Once again, Mr. Perry has earned a spot on this list. His campaign ad focuses on all the positive things he has done for the people of Texas and America. However, in 2014 Rick Perry was indicted for abusing his power as governor as well as coercion of a public servant. Despite the indictment, he claims he is innocent and stated in a campaign ad, “We need a president who has done the right things.”

Does being indicted for abusing your power as governor count as “doing the right thing?”

2. One of the most recent candidates to enter the race was Chris Christie, who launched his bid for the White House two weeks ago. Christie centered his presidential announcement around his blunt and truthful personality. He stated that the current politicians in Washington are lying and stealing from the American people and this must be stopped. He stated:

“The horse is out of the barn and we gotta get it back in.”

But the real question, Mr. Christie, is who let the dogs out?

1.  Mr. Trump, of course, takes the number one spot. After his presidential announcement, he did his first interview with Bill O’Reilly. In the interview, Mr. O’Reilly asked Mr. Trump a series of questions known as the “lightning round” on the show. This round consisted of answering questions about how Mr. Trump would handle different situations as president. When asked how he would handle ISIL, he stated he would “hit them so hard your head would spin.” He then followed up that statement by saying, “There’s nobody bigger or better at the military than I am.”

Except for maybe the approximate three million people that actually serve in the military, Mr. Trump.

There you have it–those are the weirdest quotes in the presidential race so far. But with so many faces in the crowd, there are sure to be more.

Jennie Burger
Jennie Burger is a member of the University of Oklahoma Class of 2016 and a Law Street Media Fellow for the Summer of 2015. Contact Jennie at staff@LawStreetMedia.com.
Share:
Related Items2016 Presidential HopefulsBest QuotesBobby JindalChris ChristieDonald TrumpHillary ClintonLincoln ChafeeRick Perry