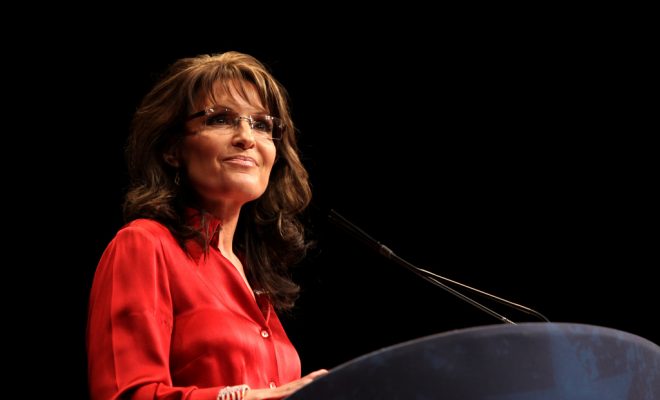 Sarah Palin likes Donald Trump, but doesn’t believe he made it all the way to the White House on his own. On the holiday edition of the Breitbart News Daily radio show she claimed that God was responsible for Trump’s win. In the show, she said she saw the role “divine providence” played on the campaign trail. She said people have been desperate for a change after the country’s deterioration and that his victory was due to people praying to God that the rest of the citizens would wake up. Palin claimed she had seen it “first-hand.” And she also said this:

I saw more and more people’s eyes open, and I think so much of that was based on the church in general, those people of faith who were praying to God that people would wake up. Remember, our Founders dedicated this land, this new country that would be America, this idea of America, dedicated it to God. If I were President, I’d re-dedicate us to God.

Palin has described herself as a “Bible-believing Christian,” saying that God has an important role to play in American elections. But the last time she said that God would do the right thing for America by helping John McCain beat Barack Obama in 2008, her predictions were wrong and Obama became the first black president in U.S. history. Many people had something to say about her views on religion and the 2016 election:

God heard what you said and wants you to know he responded thusly: “Leave me out of this.”

Sarah Palin says God made Trump win, confusing God with slaveowners who demanded an electoral college during the constitutional convention.

Palin also said: “We found our revolutionary Donald Trump, he’s our messenger. Donald Trump heard the voice of the people and allowed the people to expose what needed exposing.”

To make Palin’s year even better, it was reported on Wednesday that she is being considered for a cabinet role as the Secretary of Veterans Affairs. According to a Palin aide she has been telling Trump transition officials that she feels she could be of use in a “productive and positive way.” She has focused on the VA for a while; her eldest son is an Iraq War veteran and earlier this week her son-in-law posted a video to Facebook promoting her work with veterans. Though Palin has not yet been to the Trump Tower to meet with the President-elect, she was one of his first endorsements.

There were mixed reactions on social media to that news as well.

Sarah Palin is “super duper excited” that she might be in charge of the dept for animal doctors. @monicajibanez @georgeswright

Palin has also been talked about for the position of Energy Secretary, which could be pretty catastrophic considering she posted a Facebook status showing off her view on energy, saying “Drill, baby, drill!” She also wrote: ”The inherent link between energy and security, and energy and prosperity, is real and recognized by every American except sketchy politicians and deceived faux environmentalists.” So, if you thought we left Palin behind in 2008, don’t worry, she’s back and busy in 2016.

Emma Von Zeipel
Emma Von Zeipel is a staff writer at Law Street Media. She is originally from one of the islands of Stockholm, Sweden. After working for Democratic Voice of Burma in Thailand, she ended up in New York City. She has a BA in journalism from Stockholm University and is passionate about human rights, good books, horses, and European chocolate. Contact Emma at EVonZeipel@LawStreetMedia.com.
Share:
Related Items2016 ElectionBreitbartDonald TrumpGodReligionRepublicansSarah PalinVeterans Affairs