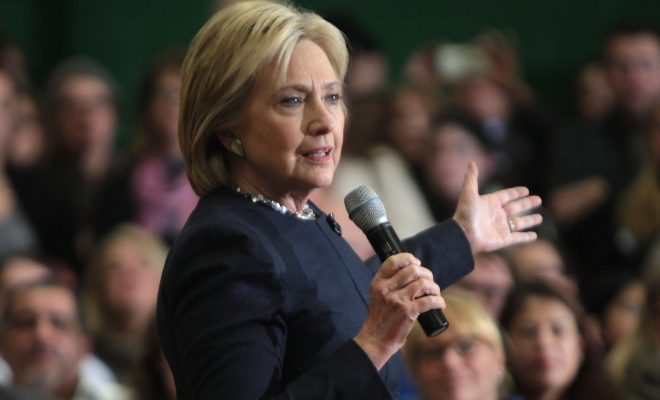 Last night’s Democratic primaries ended with victory for Sanders in Oregon, and for Clinton in Kentucky–although she finished that primary with only half a percentage point more than Sanders. The fact that Sanders keeps winning some states points, according to some, to weaknesses in Clinton’s strategy. But more importantly, it indicates that a big group of voters still want Sanders in the White House and agree with his ideas, so maybe it’s not over quite yet. And in a speech in California, Sanders once again asserted that he would not give up until the last vote is cast, saying “Don’t tell Secretary Clinton, she might get nervous–I think we’re going to win California.”

As of now, Clinton has a total count of 2,291 delegates compared to Sanders’ 1,528–this count includes superdelegates. There are 946 delegates still up for grabs. It has long been seen as a matter of course that Clinton will be the Democratic nominee, but as Sanders keeps going strong and party unification seems far away, tensions have increased between the two sides. Last Saturday it boiled over for some Sanders supporters, who started revolting after a number of Sanders delegates were deemed ineligible by throwing chairs and yelling at the Democratic convention in Nevada. They claimed that the elections are rigged and expressed death threats aimed at the chairwoman of the Nevada Democratic Party, Roberta Lange.

Sanders’ seemingly mellow response to the violence has surprised and upset many. He only spent one sentence on it in a press release on Tuesday, but focused mainly on the same thing the angry supporters had been saying, namely how the party interfered with a fair and Democratic process. He was urged by some Senators and party leaders to take control of his supporters. Some voices in the Democratic Party also asked the Bernie supporters themselves to be sensible and support the candidate who gets the most votes and delegates, since it is more important that the party stands united against the Republicans.

After all, the results in Kentucky and Oregon do show that Clinton still is the probable nominee. To have an actual chance to win the whole thing, Bernie would have needed a much bigger margin in Oregon–over four times bigger than it was. But the fact that he is still running means that Clinton needs to divide her focus between beating Sanders in the remaining states, unifying the Democratic Party, and fighting Trump–all tasks that will certainly continue to take some extra effort.

Emma Von Zeipel
Emma Von Zeipel is a staff writer at Law Street Media. She is originally from one of the islands of Stockholm, Sweden. After working for Democratic Voice of Burma in Thailand, she ended up in New York City. She has a BA in journalism from Stockholm University and is passionate about human rights, good books, horses, and European chocolate. Contact Emma at EVonZeipel@LawStreetMedia.com.
Share:
Related Items2016 Elections2016 PrimariesBernie SandersDemocratic PartyDemocratic PrimariesHillary Clinton