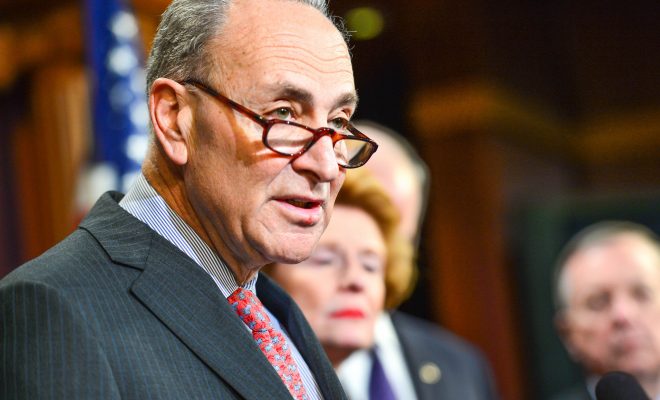 Democrats’ “A Better Deal”: Classic Liberal Priorities and a Dash of Populism

For the past six months, Democrats have been glued together in a unified front against President Donald Trump, but haven’t articulated many plans of their own. On Monday, for the first time since Trump took the White House, Democrats presented their vision for the 2018 midterms and beyond. Democratic leaders unveiled the plan in Berryville, Virginia, in a predominantly Republican district currently represented by Republican Representative Barbara Comstock.

Titled “A Better Deal: Better Jobs, Better Wages, Better Future,” the Democratic message is a grab-bag of populist ideas nicked from both the Trump and Senator Bernie Sanders (I-VT) schools of thought, as well as long-running Democratic policies. It lays out a plan to boost jobs and lower the costs of living, including prescription drug prices. The plan also includes a proposal to increase the federal minimum wage to $15 an hour. Here is what else you need to know:

On jobs in particular, the new agenda borrows heavily from the Trump campaign playbook of attacking “special interests” and “elites.” But Democratic leaders also sought to draw a line between their working-class promises and the promises Republicans and the Trump Administration have failed to deliver on. “Republicans have spent six months trying to raise Americans’ health costs to fund tax breaks for billionaires,” House Minority Leader Nancy Pelosi (R-CA) said in an op-ed published in the Washington Post on Monday. “Our agenda is focused on efforts to create jobs and raise incomes for American workers, to lower the cost of living for American families, and to build an economy that gives every American the tools to succeed in the 21st century,” Pelosi continued.

The minority leader, who some progressives view as embodying the elite image the party needs to rid itself of, promised “good-paying, full-time jobs” for 10 million more Americans over the next five years. Tax credits for employers to train employees, she said, would help achieve that lofty goal. Pelosi also said Democrats envision a “massive new national commitment to expanding apprenticeships and paid on-the-job training that advances their skills and careers.”

“A Better Deal” was not drafted by Sanders. But in their public statements about the plan, Democratic leaders have peppered their vernacular with Sanders-style rhetoric, calling the economy “rigged” and railing against “vulture capitalists.”

The second page in the new Democratic playbook concerns reforming America’s antitrust laws to increase competition and innovation, and stifle consolidation and mergers in a number of fields, from airlines to communications companies. Pelosi said the party would focus on “breaking the grip of the special interests and confronting the rising everyday costs that families have endured for too long.”

“Over the past thirty years, growing corporate influence and consolidation has led to reductions in competition, choice for consumers, and bargaining power for workers,” the Democratic plan states. “The extensive concentration of power in the hands of a few corporations hurts wages, undermines job growth, and threatens to squeeze out small businesses, suppliers, and new, innovative competitors.”

To fix these issues, Democrats promise to “prevent big mergers that would harm consumers, workers, and competition.” The party also proposed a tougher post-merger review process.

Senate Majority Leader Chuck Schumer (D-NY) echoed Pelosi in an op-ed published Monday in the New York Times, but framed the agenda in simple, rhetorical strokes. He wrote: “American families deserve a better deal so that this country works for everyone again, not just the elites and special interests.”

But Schumer also did what Democrats have largely failed to do since election night: admit that voters were unclear on where the party stood. “Democrats have too often hesitated from taking on those misguided policies directly and unflinchingly — so much so that many Americans don’t know what we stand for,” Schumer wrote.

But a recent Washington Post-ABC News poll suggests voters are still unsure of what Democrats believe in. A slim majority of those polled–52 percent–said the party only espouses an anti-Trump message, while 37 percent said the Democratic Party “currently stands for something.” With less than a year and a half until the 2018 mid-term elections, Democrats are trying to change that perception: “Our better deal is not about expanding the government, or moving our party in one direction or another along the political spectrum,” Schumer said. “It’s about reorienting government to work on behalf of people and families.”