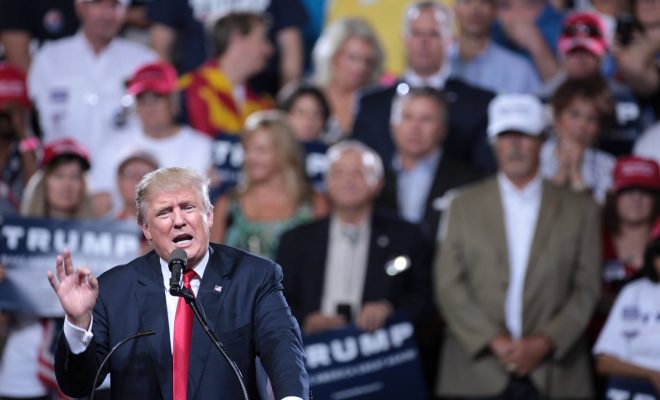 A presidential elector has officially announced that he will not be voting for Donald Trump on December 19. In an op-ed in the New York Times, Republican Christopher Suprun declared his opposition to Trump. He says that the President-elect’s lack of foreign policy experience and his demeanor make him unfit for the presidency: “He does not encourage civil discourse, but chooses to stoke fear and create outrage. This is unacceptable.”

I worry about America when taking a vote is considered treason. https://t.co/ingWbRkdC1

Now, some Democrats calling themselves the “Hamilton Electors” are hoping that more Republicans will be encouraged by Suprun’s act and refuse to stand by their party’s nominee. According to Politico, there are at least eight Democratic electors in the group, based in Colorado and Washington. They have been working to influence other electors to choose a Republican alternative, likely Governor John Kasich. It is unclear whether he would be up for the job, but Suprun also mentioned him as a fitting choice. There are 538 electors that officially choose the president, and one candidate needs 270 to win. So, to have a chance to block Trump from actually taking office, the anti-Trump electors and Democrats would need to persuade 36 more to vote for someone else.

Curious about #HamiltonElectors strategy? Get clear here, and then unite with us to #stoptrump: pic.twitter.com/G3BHdcByUD

Prominent Harvard law professor Lawrence Lessig is joining forces with a California law firm, ready to give legal support and free counsel to electors who choose to vote for someone other than Trump. The effort, called “The Electors Trust,” will also provide a space and platform for electors to discuss and construct a strategy for how to vote on the 19th, to see whether there is enough support to actually stop Trump. “It makes no sense to be elector number five who comes out against Trump. But it might make sense to be elector 38,” Lessig said.

Clinton’s popular vote lead is now over 2.65 million — and above 2%. This shouldn’t happen. It’s time to reform the electoral college.

Since Hillary Clinton received over 2.5 million votes more than Trump in the election, abolishing the Electoral College has been a hot topic. However, some say removing it would only lead to chaos. To do so would require a Constitutional amendment.

Eradicating the Electoral College would also risk tilting general elections in favor of nominees that could win major metropolitan areas such as New York and California, with no need to campaign in rural areas or in less populated states. It could also lead to extremely close elections that would require recounts, and delay the whole process. And if elections were to be decided by the popular vote, it would be difficult to win an absolute majority because of third party candidates. This year, Hillary Clinton won the popular vote, but not by a majority—she got 48 percent of the vote.

On December 19, the electors will head to their respective state capitals and cast their votes. To further support electors who are anti-Trump, a team of lawyers connected to the Hamilton Electors is already preparing to challenge laws in the 29 states that have legislation binding electors to their party’s nominee. Even if the chance of avoiding a Trump presidency isn’t that great, they’re going to try.

Emma Von Zeipel
Emma Von Zeipel is a staff writer at Law Street Media. She is originally from one of the islands of Stockholm, Sweden. After working for Democratic Voice of Burma in Thailand, she ended up in New York City. She has a BA in journalism from Stockholm University and is passionate about human rights, good books, horses, and European chocolate. Contact Emma at EVonZeipel@LawStreetMedia.com.
Share:
Related Items2016 Presidential ElectionChristopher SuprunDonald TrumpElectoral CollegeElectorsHillary ClintonPopular VotePresidential Electors